Who Are You? Polydor's Tom March on how The Who learnt from Lana Del Rey and The 1975 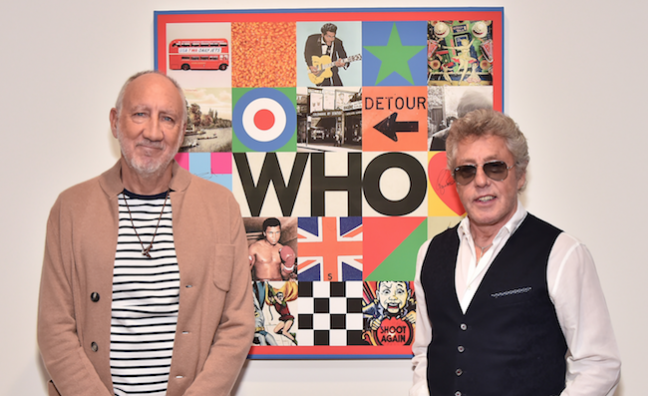 The Who are back with their first album in 13 years. According to the Midweek, the Who LP is currently on course to be their first No.1 in 48 years.

The Who's relationship with Polydor is one of the most enduring band/label alliances in rock'n'roll. While there is a new generation of executives at the major, they are tapping into their work with the likes of Lana Del Rey and The 1975 to help make this "passion project" a global success.

As Music Week meets the team behind The Who's return, we speak to Polydor co-president Tom March about the label's strategy for Who...

Did you ever think that you work on a new Who album during your career?
"[laughs] We knew there was one in the works when we [March and co-president Ben Mortimer] first started at Polydor. It became a bit of a passion project for us to make sure this record saw the light of day. The moment we heard the early demos we knew we had to make sure this record came out, we knew it was special straight away and it would be an important record. For me personally to be able to work one of my favourite bands of all time is an honour. I think the whole label feels that way about it."

So much has changed in the 13 years since The Who last released an album, how do you approach this record?
"You always looked at experiences we’ve had, but we can look to recent records we’ve worked. A lot of this is about catching the right sentiment and exciting the fanbase. We’ve been listening to their audience. We reached out to Peter Blake for the artwork [pictured with the band] right at the beginning, it’s spectacular. The Who are one of the greatest bands of all time and then you have one of the most iconic sleeve designers involved, it all helps to add to the gravitas around the release. There’s a lot we can learn as well from the huge success we had with The Rolling Stones' Blue & Lonesome two years ago too, the way that record caught the mood. What we learnt from that was that record was exactly what The Stones fanbase wanted. Listening to The Who fanbase and listening to the quality of this record, if you can create the right conversation around the record it can really snowball. That’s what we saw with the Stones. We know the fanbase is excited, we’re listening to what they’re saying – they’re engaged, the band are engaged and excited so I think we have the perfect storm here in time for Christmas. We know we can get to the audience with this record because it is a record they will want."

Has your physical sales success with the likes of Lana Del Rey or The 1975 fed into this project?
"We’re experts in talking to and listening to our artists’ audiences. We’re experts in creating a product that they want. That’s testament to our exceptional D2C team here and our e-commerce team. We’re incredibly skilled here, you only have to look at Lana, Sam Fender, The 1975 and Elbow recently, we do this week in week out and we’ve done the same with The Who to date. We know what we’re doing."

How about streaming? It is new territory despite the band's heritage...
"It’s the key area we’ve identified for growth. When you’re putting out a record now you can’t just be thinking about one release, especially when you have an artist with as rich a catalogue as The Who on a global level. We can’t just be thinking about the new album, our plans include how we warm-up the catalogue across all partners into and around the release and through to next year with all the live shows. We have a 12-month 'new catalogue campaign'. You’re talking streaming, activations with partners and the catalogue team have got big plans in terms of what they’re doing through content to drive The Who’s catalogue on streaming services. We do that with every record. You’re driving people to catalogue too. This is the first time The Who have put out brand new music in the streaming era really, so it’s a huge opportunity to capitalise on."

Are the band embracing that world?
"If you speak to Pete Townshend, he’s so switched on. I have the most unbelievable conversations with him about new media, technology and everything. He’s heavily focused on this and wants to do as much as he can."

What are your hopes for Who?
"We’re coming at an incredibly busy time of year but the early momentum feels incredibly positive and I want this to be remembered as one of the best Who albums ever made. I think it will be."

Subscribers can read Music Week's cover story interview with The Who.