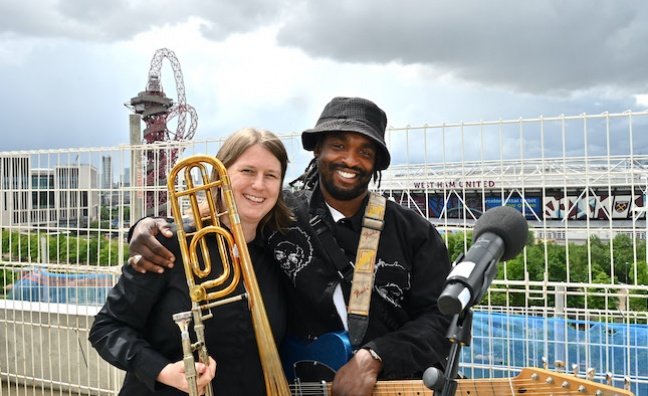 The BBC is celebrating the completion of its new music studios, which are due to open in 2025 and are located at East Bank – a new cultural and education district at Queen Elizabeth Olympic Park, Stratford.

The ceremony, which marks the 'topping out' of the new building, was commemorated with the first live performance at the site, with East London-born and BBC Introducing singer-songwriter Hak Baker and the BBC Symphony Orchestra's principal trombone, Helen Vollam (pictured), performing Baker's latest composition Bricks In The Wall.

The new studios will be the home of the BBC Singers, BBC Symphony Orchestra and Chorus, rock and pop sessions, BBC music education and outreach, as well as one of the largest sheet music collections in the world.

They will also house music sessions from the likes of Radio 1 Live Lounge, through to BBC Proms rehearsals, Radio 3 concerts, and performances from the BBC Pop music stations.

BBC Radio 3 controller Alan Davey said: “We are thrilled to celebrate the next chapter in the BBC’s history with the topping out ceremony of the BBC Music Studios. Making amazing, world-class music for all our audiences is our mission across all genres and to mark this occasion with the first live performance at the studios during our centenary year feels very special indeed."

Mayor of London Sadiq Khan added: “Over the last decade, we have seen the area in and around East Bank grow as a hub for creativity and innovation, becoming an exciting destination, not just for Londoners, but for people across the country and the world. We are proud to support the new BBC Music Studios, as well as the wider East Bank partners, who continue to work with local cultural partners and community groups to inspire the next generation of talented young musicians.”

In 2018 the BBC announced the closure of its legendary Maida Vale Studios, and its plans for the new development in Stratford.