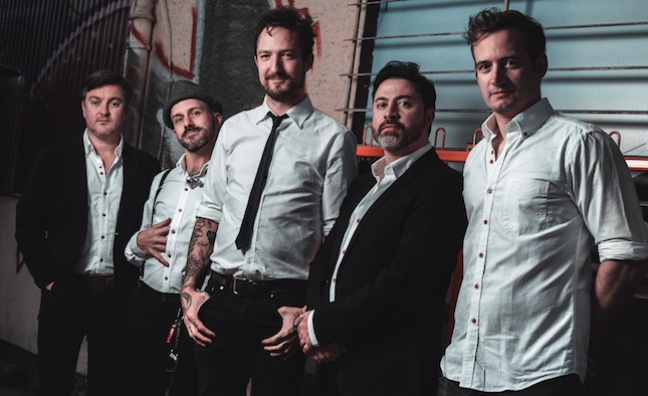 Music Week is monitoring the impact of the Covid-19 spread around the globe on the biz.

The outbreak has wreaked havoc on the live music sector, leading to widespread festival and tour cancellations and the announcement of the government's £1.57 billion arts emergency fund.

Frank Turner to reunite with The Sleeping Souls for livestream performance

On August 9 Frank Turner will host a livestream with his band The Sleeping Souls for an hour-long exclusive performance.

The stream will be broadcasted on Dice and is in support of his touring family.

Sennheiser are teaming up for the event, providing audio, video and lighting support and will mark Turner’s 2,500th show.

“I'm very excited for the show on Sunday, August 9th, for a bunch of reasons,” said Turner.

“Firstly, it's the first time I'll be seeing and playing with my band since lockdown started; having the full range of musicians and instruments will be a nice change from playing solo to my phone.

“Secondly, my crew have put together an amazing production for the show, with help from our friends at Sennheiser; top quality audio, video and lighting. And finally, it'll be my 2,500th show - one for the history books. I can't wait.”

Tickets are available now via the Dice app.

With the support of Frank Turner, Fightback Brewing Company have been announced as the Official Beer Partner by Music Venue Trust.

Launched in 2018, the company is stocked in over 60 grassroots music venues across the UK and will donates 5p to Music Venue Trust for every pint sold.

The bottles are available online to enjoy at home now.

Frank Turner said: “The Save Our Venues campaign has been a great success in showing what all of us can achieve when we come together to fight for our corner of culture. The Music Venue Trust Save Our Venues Campaign and everybody who's been involved in it has made great strides in raising money and raising awareness during this difficult time.

“But the fight is far from over, and there is more that we can do. Of course everybody can go to www.saveourvenues.co.uk and get involved and donate to the campaign there, but Music Venue Trust have also announced new lines of Fightback Lager, Fightback IPA and Fightback Cider and it's delicious! A donation from the sale of every single pint, bottle and can goes to the Save Our Venues fund.

“So get involved, get yourself a drink, donate to the campaign and let's save our venues. Together.”

CEO Music Venue Trust, Mark Davyd, said: “Fightback is the only beer brand which donates to Music Venue Trust from every pint, bottle and can sold. With the help of all our friends and supporters we can amplify the message that This Beer Saves Music Venues. Every bottle will make a positive difference to our #saveourvenues campaign.”

Head of AMPED, Dean Tabaac, said: “AMPED just finished another record breaking fiscal year (7/1/19 to 6/30/20) and we are defying and defining what physical sales can do on and offline. We were just about even with prior fiscal on CDs while the industry was down 30% and the industry was up 10.5% for vinyl while AMPED was up over 30%!

“In the new year, we think a critical campaign needs to focus on moving the new release street date back to Tuesday. The Friday street date has proven to be detrimental to maximizing sales across physical and digital platforms. Streaming remains strong and we feel it is actually helping physical sales since there are no longer cultural borders preventing anyone from listening and learning about any genre or artist they want.”

Tomorrowland Around the World

The first edition of digital festival Tomorrowland Around the World aired last weekend reaching over 1 million views, and now fans that have bought tickets can re-watch the action for two more weeks.

From 5pm (CEST) on-demand video platform Relive will feature full sets and performances from the weekend of over 60 artists across the electronic and dance genres.

Workshops and Inspiration Sessions will also be available, and tickets are available now.

In aid of the live events sector, Peter Gabriel has announced his support for the #WeMakeEvents campaign created by the Professional Lighting and Sound Association (PLASA).

The campaign aims to get the voices of the industry heard by the Government and asks for: Grants rather than loans to be made available to businesses in the events supply chain, the furlough scheme to extend until the industry is back to work, and an extension the self-employment scheme.

Gabriel gives his support as a festival co-founder of WOMAD which has also been effected by the impact of Covid-19.

In a statement posted to his website, he said: “The live events sector employs over 600,000 highly skilled people in the UK - event production, audio, lighting, video, logistics, planning, transportation and technology - over 70% of which are freelancers. All of whom have had no work for the past four months with little likelihood of restarting until Spring 2021 at the earliest.

"Even though, despite our own losses, we and some others are setting up some small funds for retraining, this industry really urgently needs proper support of the like that has been given to many other businesses. Without this immediate support from government, the entire supply chain is at risk of collapse. Financial support needs to be extended to the people and companies in this sector until they can return to work.

"Many of these people are freelancers so don’t fall under furlough schemes, so right now they are feeling the pinch very badly and if we want live events and festivals to stay an important British business then it needs to be supported.”

The UK Council of Music Makes (CMM) has said it “welcomes the guidance for the Cultural Recovery Fund to be distributed by Arts Council England.”

Comprised of FAC, Ivors Academy, MMF, MPG and the MU, the CMM stated, “the primary aim of such unprecedented funding should be to support the broadest cross-section of our industry to facilitate a safe return to economic activity.

“Together these funds – with the new £2m open to crew, stage managers and technicians – should provide the best opportunity to support more workers, including the creators and performers, and all those roles that are dependent upon live music.”

Cockpit director, Dave Wybrow said: “We have had a lot of really good feedback about Sunday's pilot opera with the audience and I am unsurprised. It was a triumph. Everyone that worked on it made it a real success and it was a pleasure to be there.

“The joy is that some things were better than before!, like people being able to order a drink using Whatsapp from a table out in the street.

Leading talent agency CAA has confirmed the departure of around 90 agents and executives from across the business.

The firm said the layoffs were made with "greater visibility into the Covid-19 challenges of fiscal year 2021", while approximately 275 assistants and other workers will be furloughed.

According to Variety, the cuts will include staff from the firm's London, New York, Los Angeles and Nashville offices.

"CAA began working remotely earlier this year due to the pandemic," read a company statement. "Everyone at the company participated in reducing compensation with the hope that we could keep all employees financially whole through the end of our fiscal year, September 30, 2020.

"We are honuoring that commitment, including for those impacted by today’s announcement.

"But, with greater visibility into the Covid-19 challenges of fiscal year 2021, we have made the difficult decision to implement workforce reductions, in addition to our ongoing cost-saving measures.

"Effective this week, approximately 90 agents and executives from departments across the agency will be leaving.  In addition, we are furloughing approximately 275 assistants and other staff. The company will continue to fully pay the health plan premiums for those being furloughed.

"This is a painful and unprecedented moment, and words are insufficient. Today, we simply say that we extend our sincere appreciation and deepest gratitude to our departing colleagues."

Fellow international agencies WME and Paradigm are among other live music companies to have laid off and furloughed staff since the concert shutdown began in March.

Organisers of Sound City have cancelled the 2020 event and announced the event will return from April 30 to May 2, 2021.

Originally scheduled for May, Sound City 2020 was postponed until September as a result of the Covid-19 lockdown.

In the meantime, the Sound City team developed and launched Guest House – a livestreaming platform with weekly programming. The inaugural Stay At Home Festival in May saw livestreamed performances from the likes of Friendly Fires, The Wombats, She Drew The Gun and Ian Skelly. New Guest House shows will air throughout the year, including between September 25-27 when this year’s Sound City was due to take place.

Sound City MD Rebecca Ayres said: “Cancelling Sound City this year is one of the most difficult decisions we have ever had to make, however, with all factors taken into account, we feel that by pushing ahead in September we would not be able to guarantee the usual exciting, quality event that our fans and artists deserve. It is for the best that we focus on next year’s Sound City so that we can work to give everyone an unforgettable festival experience with the very best emerging music.

“These difficult times have presented the entire music industry with incredible challenges - but there are so many examples of those challenges being turned into opportunities. We started our Guest House livestreaming platform as a way of helping artists who had a vital revenue source snatched from them, and it has grown into a highly popular part of the Sound City brand.

"We will continue to bring great music and experiences to fans and more opportunities to artists and partners via Guest House and look forward to a spectacular return for the Sound City festival and conference in 2021.”

World famous jazz venue Ronnie Scott’s has announced its first schedule of artists after confirming it will reopen on August 1.

The Soho club will open with a reduced capacity of 50% and with strict social distancing measures in place. It will also provide seated tables outside providing champagne and burgers.

Simon Cooke, MD of Ronnie Scott’s said: "It’s great to be back doing what we do, we have been looking on enviously whilst restaurants have reopened, especially as the club is laid out like a restaurant. We have been planning the relaunch for some time so as soon as we got the green light for live performance we moved into action.

"Our unique structure of seating lends itself to distancing, some may say the added space is an improvement! Safety of our customers, staff and artists is of paramount importance so there will be protocols for the customers, the staff and the musicians.

Set for July 8-11 Exit takes place at one of the biggest medieval fortresses in Europe, high on the banks of the river Danube in Novi Sad, Serbia.

The festival is considering options to celebrate its 20th anniversary with a symbolic event this September, which will focus on an online stream.

The Serbian Prime Minister had initially asked Exit not to cancel this year's festival but rather postpone it to mid-August as the number of new daily cases was on a steady sharp decline at that point. However, organisers later decided to cancel following an increase of new daily cases in several municipalities.