Dome vs Sphere: The O2's team on the future of live in the capital 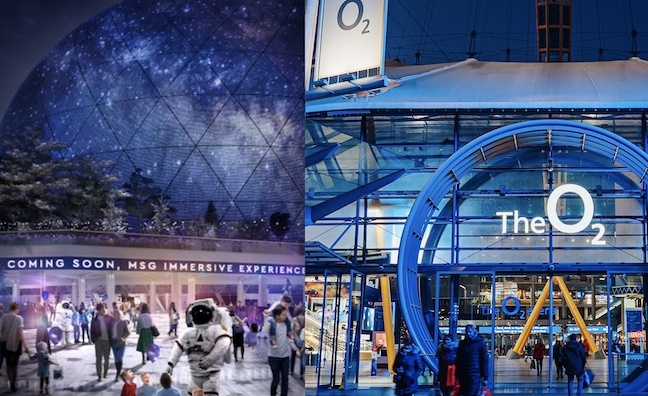 The O2 is the most successful venue in the world. But the London entertainment complex is set to face serious competition in the form of the MSG Sphere.

“It’s useful because we’re in London,” said D’Acuña. “And an artist from outside the UK is always going to play London, but they might not play Manchester. I think London is the music capital of Europe, so we want them to think of us when they think of London. For artists and managers, it’s part of a career trajectory to play The O2. We’re lucky enough to be one of those venues that gets mentioned as a stepping stone for an artist, a pivotal moment in their career.”

The O2 duo are now weighing up the prospect of a new rival in town, following the approval for the new MSG Sphere from planning authorities at the London Legacy Development Corporation.

Earlier this year, Paul Westbury, MSG’s executive vice president of development and construction, said the Sphere would become “a global destination for music and technology”. The new venue is set to feature huge LED advertising displays around the structure.

AEG, which operates The O2 (which was formerly the Millennium Dome), had voiced opposition to the MSG Sphere during the consultation over the planning application.

The 21,500-capacity MSG Sphere London venue in Stratford – next to Westfield Stratford City shopping centre – would provide competition to AEG's London arenas The O2 and SSE Arena, Wembley. It is also near the London Stadium and Copper Box.

For artists and managers, it’s part of a career trajectory to play The O2

AEG has also pointed to issues with traffic and transport.

“Look, for artists, promoters and fans, more choice is good, especially as the market is going to be so saturated with everyone picking up tours after the pandemic,” said D’Acuña. “But I would query the location. If it’s a weekend and West Ham are playing at the same time as Beyoncé, it’s going to be awful up there.”

Emma Bownes offered a diplomatic view of the new rival.

“I was asked similar things when the Co-op Live came about in Manchester [AEG operates the rival Manchester Arena ],” she said. “I was hoping it would be different after the pandemic, but when I look at agents, ticketing companies and venues – big businesses – I think there’s a focus on what the other person is doing. And I think we’d genuinely all be better off focusing on what we’re doing, on providing the best service we can, rather than focusing on the competition.”

The O2 celebrated a Music Week Awards win with AXS for their paperless ticketing initiative during the pandemic.

The O2, of course, has proved its popularity and it is celebrating 15 successful years in business.

“As a customer you are here in a space without cars as soon as you get off the train,” said Emma Bownes. “As a performer it means a much easier load in and load out than it would if you were in the middle of Manhattan, for example.”

“It’s still the newest arena in London,” said Christian D’Acuña. “And AEG have continually invested in making it better. I’ve been to other spaces and arenas that feel quite run-down compared to The O2. I think it’s something people appreciate, the facilities and what we can do with production.”

“There’s the fan experience too,” added Emma Bownes. “Within the arena bowl, yes, it feels like an arena. But you actually do feel close to the artist. I was quite shocked by that the first time I came here.”

There has been the occasional booking the pair feel they’ve missed out on, as artists have changed touring plans.

“The Weeknd decided to go straight to doing stadiums after the pandemic,” said Bownes. “It’s disappointing, but also fair enough. We don’t want to slow down anyone’s career plans.”

But the biggest issue is still, as many others in the live space also report, a severe shortage of qualified staff.

“Crew shortages are a real challenge right now,” explained Bownes. “Especially if it’s a late notice show or a reschedule, then you are really pushed to find people. Everyone is going through the same motions and the same struggles right now, whether that’s because of a lack of staff, or that the new staff haven’t got the experience of the old staff.”

The pandemic did, however, mean that many venues found a feeling of solidarity.

“We started to work together,” said D’Acuña. “Informally, by asking what [each other] was doing, and also by lobbying the government to get them to hear our issues.”

Following the impact of the pandemic, live is thriving in the capital with the return of Koko after extensive refurbishment and the launch of Outernet London next month.

Both Bownes and D’Acuña say that The O2 is only a part of the live music ecosystem and they point to the need for smaller venues to stay afloat and to be supported.

“We’ve just booked Biffy Clyro,” said D’Acuña. “And they are a band who I first saw play in the Night And Day Café in Manchester. Artists need places where they can have those initial experiences of playing live and then venues they can grow into.”

“And it’s the same for people who want to work in the music industry,” added Bownes. “Of course, I didn’t start out at The O2. As a student, I managed to lose money on a sold-out gig booking Rialto to play at Hull University. I was at The Borderline, then Ocean in Hackney. You don’t learn how to promote gigs without starting small. Sound engineers need to start in small rooms. It’s the same for all of us.”

In our latest issue of Music Week, we speak to Outernet CEO Philip O’Ferrall and venue operator Karrie Goldberg - subscribers can read it here.