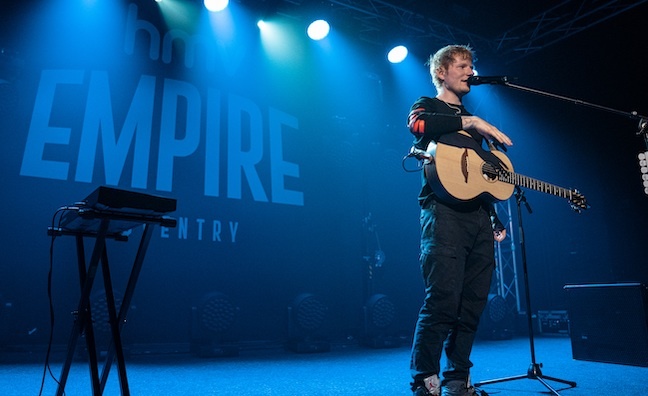 The singer performed to 700 fans at the HMV Empire, Coventry, in celebration of the centenary, marking 100 years since the iconic British high street retailer opened its first store in 1921.

The gig also represented the grand opening of the brand new HMV-sponsored Empire concert venue, which recently underwent a £500,000 refurbishment.

Alongside hits such as Shape of You and Perfect, Sheeran performed the current No.1 single Bad Habits, as well as new songs Visiting Hours, First Times and Overpass Graffiti.

Ed Sheeran told the audience: “I love having a crowd here, this is great. And getting to play rooms like this again, it’s been quite a long time since I’ve played something that has a roof, if that makes sense, and I really, really love it. This is where I spent so many nights of my life on my first album and second album, playing theatres and academies, and it is always the best buzz.”

Fans began queueing for the gig at around 4.30am, a full 17 hours before Sheeran took to the stage.

Maisie Peters, whose debut album You Signed Up For This comes out on Sheeran’s record label Gingerbread Man Records on Friday (August 27), entertained the crowds as support act.

HMV, in partnership with Coventry City Council, also hosted a free livestream of the Centenary Concert at Assembly Festival Garden as part of Coventry’s City of Culture 2021 Celebrations. Some 3,000 fans snapped up tickets to the live-stream in just over 30 minutes last week.

Phil Halliday, managing director at HMV and Fopp, said: “Ed put on an amazing show tonight for HMV’s 100th birthday. It was brilliant to see such a huge superstar perform such an intimate gig – it’s something the lucky fans there will never forget.”

Earlier, Ed Sheeran said: “Very happy to say that I’ll be performing for HMV’s 100th birthday in Coventry. HMV is a store that I spent a lot of time in growing up and a place where I discovered lots of new music, so I’m looking forward to celebrating this milestone with them.”

HMV currently operates 107 stores across the UK and is marking its centenary year with exclusive vinyl releases, further store openings and a return to in-store signings and live performances.

Subscribers can read our special feature on the centenary here.