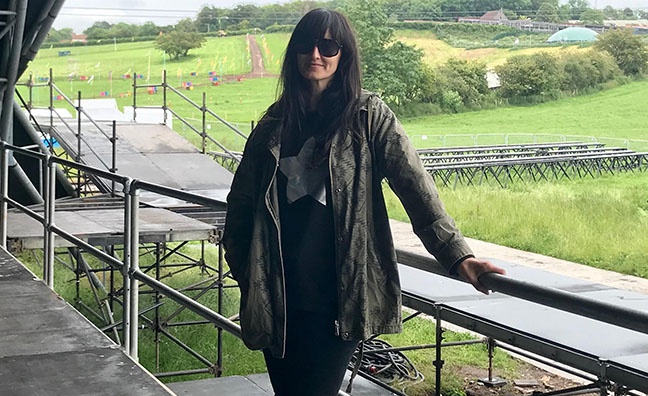 Whether you’re in the field or watching on TV, the artists appearing on Glastonbury’s Pyramid and Other Stages are likely to form a big part of your festival weekend.

But, of course, the acts don’t just rock up and play. Sets are meticulously planned, and the person responsible for making sure everything runs smoothly is Emma Reynolds-Taylor, production manager for the two stages.

Music Week is celebrating all things Glastonbury this week, from the BBC's bumper coverage, to Emily Eavis' view on the weekend to Two Door Cinema Club's big appearance. And, following Music Week breaking the news that the festival is staying put until 2023, and with the festival weekend looming, Music Week caught up with Reynolds-Taylor, who will be helming her fifth Glastonbury, to discuss Stormzy, Kylie and why Dave Grohl’s broken leg was her biggest challenge…

How are the preparations for Glastonbury 2019?
“It’s all going really well, we’ve got a great team. We’ve had a year off so we’re feeling more energetic and sprightly.”

Are there any big changes since the last festival in 2017?
“We’re actually quite restricted in terms of any changes we can do on the Pyramid, because it’s a fixed structure. We’ve got a lot of immoveable objects like rivers and ditches to work around. If we could, we’d probably want to make the Pyramid four times the size and double the size of the dressing rooms, but we have to work with the space we’ve got. We have got a new roof on the Other Stage which means we can have a bit more weight in there.”

How easy is it for Glastonbury to cope with big stage productions?
“The Pyramid is a lot more difficult for people to work on. It’s a triangle, not a square so that makes things a bit problematic for people, but they’re all really understanding. People want to play here so they’re always very flexible with what they get to do. They tend to work with us. There’s big production across both the Friday and Saturday and then Sunday we have our big pop acts coming in. Really, we’d like the Pyramid to be four times the size! But everyone manages to scale things down to work with us. A lot of people come into it with the right attitude, which makes it a lot easier!”

Kylie Minogue normally has a major production, will she be able to do that in her afternoon slot?
“Because she’s playing during the day, it does limit what these shows can actually look like. People do understand that, when they’re booked to play in the afternoon, it’s going to look very different to when they’re playing at 11pm or indoors at the O2. People come into it with that attitude. Particularly with that Kylie legends slot, the fact that they can see the audience and interact with them is really what makes that slot so special, and that’s something that you wouldn’t necessarily get at a night-time show. People come dressed up, the artist can see them and that creates a unique atmosphere that you can’t get anywhere else.”

How about Stormzy’s headline show? Presumably he’s looking to make a big statement?
“Their production has definitely been approached in a very different way, from a design point of view. They definitely want to make an impact and we want to work with them and help them achieve that. We’ve done a lot of engineering with them to make their concept workable on that stage, which is very challenging but it’s such a good achievement once you’ve worked through a bunch of ideas and come up with a way to make something work. What we did with Ed Sheeran a couple of years ago made us all realise what’s possible. So we’re approaching Stormzy with great confidence that we can engineer it and come up with a show that not only works from a visual impact point of view, but also a sensible production standpoint as well. That’s definitely going to be one to watch.”

What’s been your favourite moment at Glastonbury over the years?
“In 2014, the line-up was just absolutely incredible, Dolly Parton and Metallica were on the same bill on the same stage. I don’t know where you’re ever going to see a bill like that ever again. That eclecticness of the Pyramid is what’s always appealed to me. I’ve been coming to Glastonbury since I was a teenager and always thought it was the greatest place on earth. As I got older and moved into production as a job, it’s always been the Holy Grail of production to come and work at this festival at all, let alone to come and work on the Pyramid and Other Stages. The first year I was here, I was like, ‘Wow, this is amazing for me on a personal level’. To be stood out there watching these mind-blowing shows and then be part of that production is just amazing.”

And what’s been your biggest challenge?
“It is a very challenging job – doing production for some of the biggest acts in the world that are used to playing huge stages and stadium shows that are all designed to fit in a square shape! Every year brings a new challenge, but the satisfaction you get from doing a really challenging show is great. In 2015 when Dave Grohl broke his leg a couple of weeks before the show, we moved Florence + The Machine up to headline. That was a big challenge and it’s always the band that you’ve literally just pressed ‘send’ on the last advance email for! Then you see Dave Grohl fall over and break his leg! It’s never the ones where you’ve still got loads of work to do, when something like that happens! But it was so satisfying when the Foo Fighters came back to do it a couple of years later. That was a really nice moment for them, and for us. So it was all worth it in the end.”