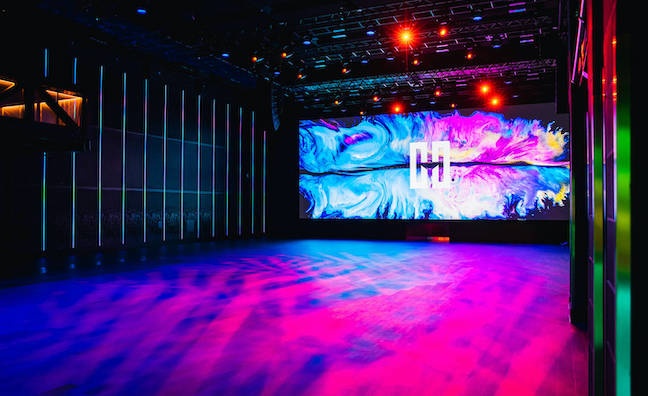 HERE at Outernet launched as a live music venue at the weekend with a club show from DJ Annie Mac.

Music Week has been on a guided tour of the 2,000-capacity, subterranean venue in London’s Denmark Street, which is part of the £1 billion retail, hospitality and entertainment development.

In the latest issue of Music Week, Outernet’s bosses open up about the ambitions for the multi-room entertainment complex, which also includes The Lower Third. The former 12 Bar on Denmark Street has been revamped as a brand new hybrid performance space and cocktail bar.

The district’s footfall is estimated at 400,000 a day, which presents a major opportunity for the music industry. As well as the ability to stream performances to giant screens above ground in the Now building, there are also direct sales options in the street-level area.

“I’m finding that a lot of the agents, promoters and managers are really thinking outside of the box,” said Karrie Goldberg, co-founder alongside Robert Butters of the JV operating partner, Green Light Development. “We have a merch shop in Denmark Street, so every artist that comes in has the ability to take space in the merch shop pre- and post-event. We’re also setting up Denmark Street Radio, so we have multiple ways we can support them pre-show, during and post-show.”

The HERE at Outernet venue features a semi-permanent stage to allow artists to choose the configuration, a top of the range d&b audiotechnik sound system, and a custom-built audio-visual control booth that descends from the mezzanine and doesn’t affect sightlines.

“We went through the space trying to understand the pain points in traditional venues for the patrons and for the artists,” said Goldberg. “We built massive bars - much larger than you would need for the capacity - in the hope that there’s less wait time for drinks, and way more toilets than we need.

“On the artist side, there’s a completely separate private entrance and an elevator to the green room with production areas connected. So this was our idea, how do you make the artist experience the best possible and the patron experience?”

While Goldberg acknowledged that the dance music world “is in love with a venue that’s four storeys down like this”, she stressed that HERE at Outernet is a flexible music space.

“It had to be the best in entertainment and support a really broad range,” she said.

Goldberg welcomed the opportunity for Outernet London to have a global impact.

“It’s great for venues our size, a lot of the managers who come through say artists play their best sets in these rooms,” she said. “But now you can stream globally and have access to a massive audience and still generate revenue that way.”

Outernet’s launch has coincided with the recent arrival of the Elizabeth Line, which has transformed journeys into Tottenham Court Road. The trains run under the soundproofed venue on noise-dimming rubber tracks.

“Major artists who have come on site tours have said, ‘How can we help you? Music has to come back to central London and back to Denmark Street,’” said Goldberg. “Having the ability to do this here, where it’s so central, it changes the landscape for them and us.”