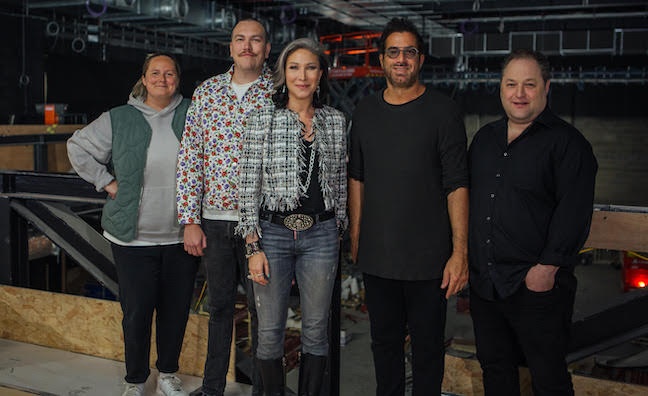 Programming teams have also been announced for the music venues, including the renovated former 12 Bar on Denmark Street.

The 2,000-capacity live events venue has been named Here At Outernet. The former 12 Bar on Denmark Street has been renamed The Lower Third - a nod to David Bowie’s early recording career in 1960s London.

Outernet is the first music venue to be built in central London since the 1940s. The Denmark Street location is synonymous with music legends, including Bowie, Elton John, The Rolling Stones and Sex Pistols.

Leo Green, concert promoter, musician and broadcaster, has joined Here At Outernet as artistic director. Green was previously director of live events at Live Nation, as well as a touring and recording saxophonist, most notably with Van Morrison. He has also worked at London venues The O2 and Ronnie Scott’s, founded BluesFest in 2011 and presented on BBC Radio 2 and 6 Music. As artistic director at Here, Green will oversee all of the venue’s programming across music, arts, theatre and culture.

“When this opportunity came along, it was simply too good to turn down,” said Leo Green. “From a venue standpoint, this is the most exciting development that has happened to London’s music, arts & culture scene in a very long time. The team at Outernet Live that Robert, Karrie & Tristan have put together is tremendously exciting, and I can’t wait to welcome all of the UK’s incredible promoters to both of our venues”.

Chloe Mitchell, programming manager at Outernet Live, joins from her most recent role as head of music for the Flat Iron Square district, following the management of the launch of Omeara in 2016. Omeara played host to the first headline shows from Jorja Smith, Dermot Kennedy, Yxng Bane and Celeste, while also becoming the home of club favourites Little Gay Brother and No Merci.

We are proud to be a completely independent venue space

Matar’s career began as a DJ at Pacha, Ibiza, going on to own two nightclubs in New York, Cielo and the award-winning Output in Brooklyn. He went on to work with Ian Schrager of Studio 54 fame on launching clubs at The Miami Beach Edition, The Times Square Edition and, most recently, The West Hollywood Edition Hotel.

“I’m elated to be part of a new London venue,” said Nicolas Matar. “As someone who was involved in the London scene since the early ’90s, it feels like I’m coming home.”

Simon Denby is the co-owner and booker for UK underground dance music promoter Percolate, and co-founder of London festivals Waterworks and Body Movements. He has curated events with the likes of Floating Points, Hunee, Midland, The Blessed Madonna, Horse Meat Disco, Bicep, Honey Dijon, Moodymann, Kerri Chandler and more. With over 12 years of industry experience, crossing between intimate club shows and larger concert venues and festivals, Denby will lead on the electronic and club programme for the venues.

Simon Denby said: "I am really excited to be part of a cutting-edge venue in the heart of the city, that will bring dance music back to Central London after the loss of groundbreaking spaces like the End and the legendary Astoria. The vision at Outernet Live with Here and The Lower Third is going to fill much-needed gaps for live and club shows both for developing the next generation of artists and top tier talent."

The news of the programming team follows the announcement of Karrie Goldberg and Robert Butters as operating partners of the venues, with a combined experience of over 50 years in the industry across live music venues, award-winning nightclubs and global touring theatre shows. They are joined by COO Tristan Hoffman, who most recently worked on the launch of Lafayette in King’s Cross and has over 18 years’ experience in venue management.

Karrie Goldberg said: “We are thrilled to be joined by this epic team of experts to launch these groundbreaking new venues this summer. We are proud to be a completely independent venue space, open to all promoters and live entertainment operators and we look forward to showing you what the programming team have been busy working on in the coming months.”

The two entertainment spaces - Here and The Lower Third - will play host to a diverse entertainment programme of live music, dance, comedy, immersive theatre, awards shows and beyond.