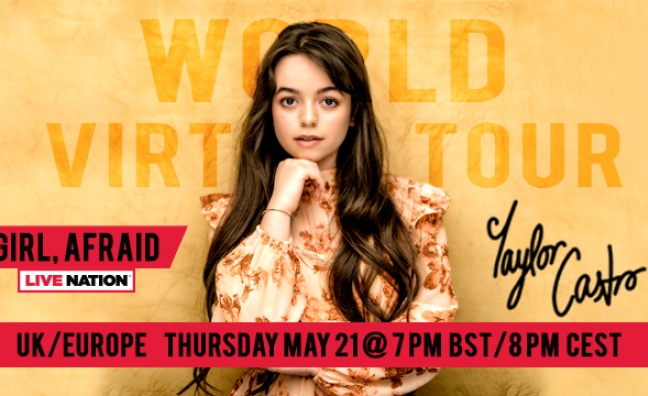 Solo Agency boss John Giddings has spoken to Music Week about his involvement in US artist Taylor Castro's world virtual tour, which begins today (May 21).

The singer/songwriter has teamed up with Giddings and Live Nation on the orchestrated live streamed world tour that will virtually reach various cities from May 21-23. It will be available for live viewing on Live Nation’s recently launched Live From Home platform as well as hosted across the promoter's regional social media channels. Post live stream, viewing will also be on Castro’s YouTube channel.

Legendary agent Giddings, who represents the likes of Little Mix, Blondie, Iggy Pop and Phil Collins, as well as promoting the Isle Of Wight Festival, said the lockdown offered a unique opportunity for developing artists.

"There are more people paying attention to streaming and online because they're not out going to gigs and they're picking up on what you're saying and doing," said Giddings. "How else are you going to get to an audience right now apart from by livestreaming?"

Castro will perform songs including her current single Abyss and the title track to her forthcoming album Girl Afraid.

“My first Live Nation World Virtual Tour is beyond exciting," said Castro. "Getting to perform these songs to a global audience is a dream come true and I’m so grateful for the once in a lifetime opportunity I’ve been given thanks to the incredible and kind John Giddings and the wonderful people at Live Nation. I hope everyone from every corner of the globe can “come” watch what I hope is a first of many innovative performances!"

"I thought she had an incredible voice and could write a great song when I checked it out, that's all it boiled down to," added Giddings. "I'm involved with Live Nation and I played her music to them. They said, 'Great, we should do something' and it's just evolved from there really."

The virtual tour will debut at 7pm tonight with a livestream show in UK along with other European territories. Castro will then perform for audiences in Asia on May 22 and Australia/New Zealand on May 23. A showcase for Holland, Saudi Arabia, Israel, India and South Africa is planned for June 4, followed by Latin America on June 5.

"The thinking is to develop it internationally at the same time as nationally because you can become big in the UK and meaningless south of the Isle Of Wight, you have to go for all territories at the same time," explained Giddings. "When we developed The Corrs the first country to take off was Denmark and then it was Australia, it wasn't the UK and Ireland, so you don't want to restrict yourself. You want to put it all out there and see what you get from it."