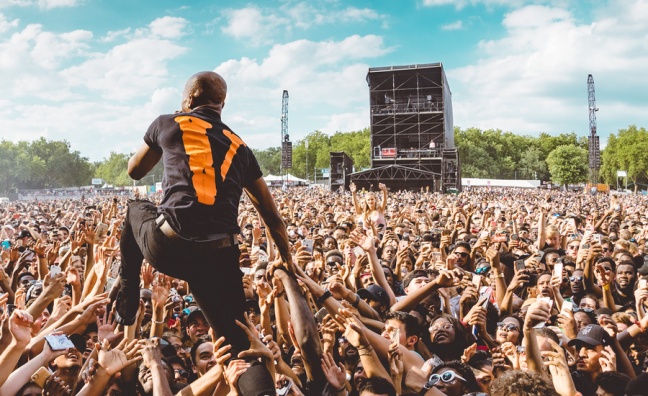 Ticketmaster has released its State Of Play: Festivals study, which reveals sustainability and gender representation to be top of UK festival-goers' concerns.

The ticketing giant surveyed 4,000 festival-goers across the country to get their thoughts on the UK festival landscape.

Its report suggests that fans are most concerned about the effect festivals have on the environment, with 62% of respondents considering waste reduction, with better recycling facilities, to be their No.1 priority at festivals going into this summer. In addition, 63% of over 55-year olds say they want to see waste at festivals reduced, compared to 40% of 16 to 19-year olds.

As luck would have it, Ticketmaster's parent company Live Nation recently announced its own global sustainability coalition, Green Nation, which is committed to the elimination of all single use plastics at Live Nation festivals by 2021.

Victoria Chapman, head of sustainability at Festival Republic, said: “It’s impossible to ignore the effects of climate change, so it’s a huge positive to see that sustainability came out as the number one concern for festival-goers this year. It is imperative that festival organisers look at how they can minimise the environmental impact of their events and work together with fans to enjoy an amazing festival experience whilst respecting the planet.”

Inclusivity of festival line-ups was also high on the agenda, with 41% of festival-goers saying they want more diversity in line-ups, with almost a third (29%) saying they consider the gender parity of line-ups before buying a ticket. Men are more concerned than women when it comes to gender representation (32% of men compared to 28% of women).

Andrew Parsons, UK MD of Ticketmaster, said: “These findings give us an insight into what festival fans really want. While it’s mostly all about the music and having a great time, I’m not surprised and encouraged to see fans wanting more action on sustainability issues and line-up equality. Festivals have always been a microcosm of wider society and with the continued rise of social consciousness we expect fans will only become more demanding of festivals to get it right.”

Half of Brits (48%) have been to a festival at least once in their life according to the report, and 37% have attended a festival since 2016. A fifth of Brits (20%) would also rather go to a festival than on a holiday.

Three in five festival-goers (62%) said they begin listening to artists they heard first at a festival, Coldplay came out on top when asked to name their dream festival act. The band also came first in the same poll seven years ago.

BBC DJ and Music Week cover star Jo Whiley added: "It’s so encouraging to see that issues like diversity in line-ups and sustainability are part of the equation when people decide which festival they want to go to, and even more encouraging that organisers are already responding to this.”