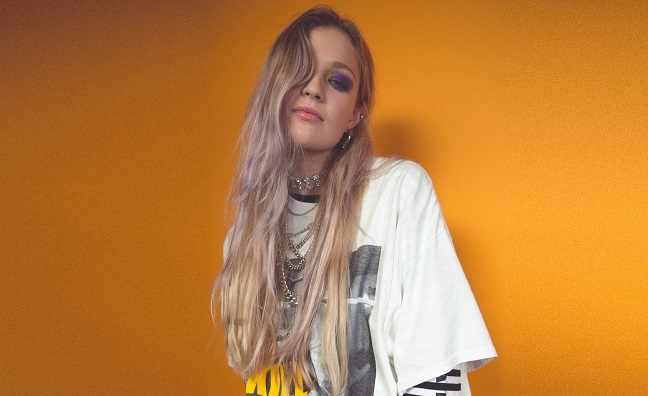 Virgin Money has announced the launch of its Emerging Stars programme as part of its push into music.

Singer/songwriter Aaron Taylor, rock band Mosa Wild and indie-pop artist Dylan (pictured) are the first three acts to be chosen for the initiative, which is designed to identify, support and promote the next generation of UK music talent, with five more artists to follow over the next 12 months.

Each artist will receive a £10,000 development fund as part of the programme offering, which can be put towards recording and releasing music, as well as used for touring and live development. Originally planned to kick-off with a live showcase, the programme will instead launch digitally with the help of official ambassador, television presenter and Radio DJ Laura Whitmore.

"I’ve always strived to support new music throughout my career from MTV, to the BRITs and BBC Introducing," said Whitmore. "I’m so excited to work with Virgin Money on this programme to support the next generation of talent at such a pivotal time for the music industry. The first three Emerging Stars are diverse in genre and output, but they have one very important thing in common - so much unquestionable talent! I am thrilled to be playing a part in helping these artists reach new levels in their careers despite the challenges we all face this year.”

The artists were selected by an industry panel featuring AEG Presents co-CEO Toby Leighton-Pope, Notion magazine MD Nicholas Douglas and Virgin Money head of consumer communications Louise Hodges. The contenders were whittled down from a longlist based on factors including music credentials, ‘It’ factor and anticipated career longevity.

“I’ve found it incredibly uplifting to listen to lots of new music from some brilliant artists while deciding on our first three emerging stars," said Hodges. "It has reminded us all that the UK is a hotbed of incredible talent, and that music really does have the power to transform moods during challenging times.

"The calibre of new music coming out of the UK right now is astonishing. We wholeheartedly believe Mosa Wild, Aaron Taylor and Dylan are on their way to becoming the next UK superstars.

"We are committed to investing in British music and supporting the futures of the UK’s most exciting new music talent. Music is in the DNA of the Virgin brand, and so we’re bringing music and money together in a way that only we can through our very own Virgin Money Emerging Stars programme.”

Successful artists will also have access to financial mentoring from Virgin Money and industry career advice from music experts, as well as the opportunity to perform live at Virgin Money’s newly opened retail stores across the UK, and at special events at the brand’s partnership venues, The O2 and the SSE Hydro, in the future.

Virgin Money will host an event to showcase the eight Emerging Stars live at Indigo At The O2 at the end of the first year of the Emerging Stars programme, which will run through to June 2021.