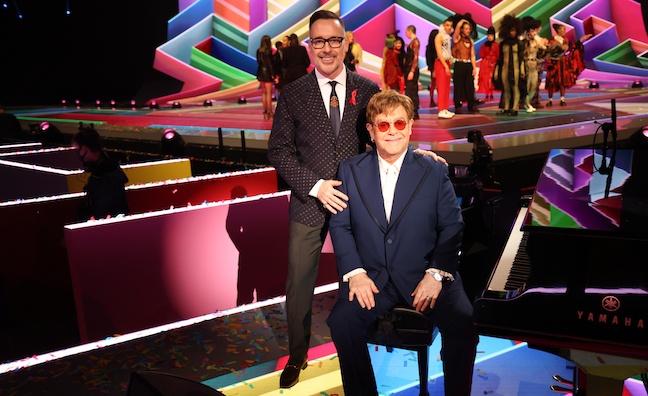 Sir Elton John and David Furnish, CEO Rocket Management, are to share the Artist and Manager Partnership award, which is sponsored by PPL, at next month’s Artist & Manager Awards.

The Artist & Manager Awards is an annual celebration of achievements across the UK’s artist and management community.

“Celebrating a lifetime of achievements, the unique accolade will highlight Elton and David’s remarkable shared successes and their incredible ongoing impact on an upcoming generation of artists and audiences,” said the announcement.

Music Week revealed that Elton John was the biggest solo catalogue artist of last year. He is currently chasing a No.1 single with his Dua Lipa collaboration Cold Heart.

Elton John was in the midst of his Farewell Yellow Brick Road world tour, marking a half century on the road, when the pandemic hit. The tour will now continue into 2022.

Elton John and David Furnish have also played a vocal role in the debate around post-Brexit European live music, urging ministers to fulfil their promises in delivering friction-free touring, a stance echoed by the FAC & MMF instigated #LetTheMusicMove campaign.

The ceremony will also celebrate the key role played by Sir Elton’s husband and manager David Furnish, CEO of Rocket Entertainment. He was jointly nominated at the Music Week Awards with Rachael Paley in the Manager Of The Year category.

Since 2015, Furnish has guided one of the most high-profile and productive phases of Elton John’s career, including the Rocketman movie biopic, the best-selling memoir Me and the major career retrospective Diamonds. In 2018, Elton John signed a new multi-faceted partnership with Universal Music Group covering recorded music, music publishing, merchandise, brand management and licensing rights.

Elton John has been a major musical inspiration throughout my life

Catherine Anne Davies, aka The Anchoress, FAC Ambassador, said: “Earlier this year, Elton invited me on to his Apple Music radio show to be interviewed about my new album The Art of Losing. What could've been a nerve-wracking experience turned out to be a total joy, not only because of Elton's warmth and empathy, but also because of his genuine curiosity and love of music. It literally spills out of him! Elton's support has benefitted countless new artists and, as a fan and FAC Ambassador, I am so delighted we can celebrate this aspect of what he does."

Paul Craig, chair, Music Managers Forum, said: “Elton has been a major musical inspiration throughout my life, as well as an enormous influence professionally. Alongside his artistic brilliance, I’m delighted we can also recognise the immense role played by David Furnish and all the team at Rocket Entertainment. To expand such a valuable musical legacy and to successfully reposition this timeless catalogue for a streaming audience is a huge achievement, to the point where Elton’s music now feels more relevant than ever.

“On behalf of the MMF, I also want to take this opportunity to pay tribute to their invaluable advocacy work, and particularly on the issue of post-Brexit touring which will impact all artists and where David and Elton have both led from the front. For all these reasons, the MMF and FAC are beyond excited that both will be joining us in person to pick up their awards.”

Peter Leathem, CEO, PPL, said: “Elton John and David Furnish are giants of the UK music industry, and truly deserving of the prestigious Partnership Award, which is proudly sponsored by PPL. Elton is one of the great artists of our times, having released hit after hit for decades, a feat matched by few others in music.

“David’s expert management has been crucial to his enduring success, ensuring Elton’s outstanding music remains popular whilst also helping him reach new fans, including through collaborations with some of the world’s most popular contemporary artists. All of this has been achieved alongside important charitable initiatives and the support of young talent. Congratulations to Elton and David and thank you for your contributions to UK music.”