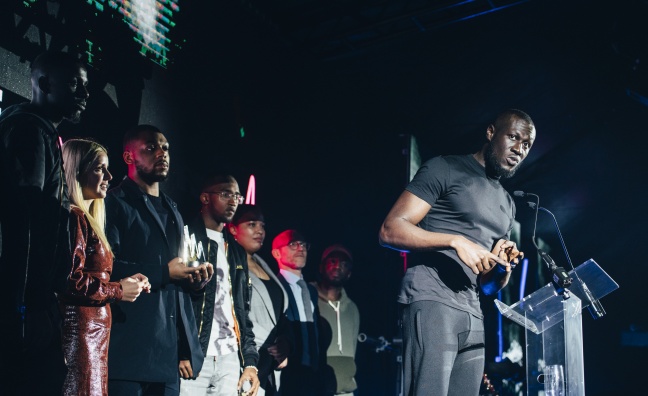 Stormzy was a surprise winner on a night of celebration at the 2019 Artist & Manager Awards (A&MAs).

The MC, his manager Tobe Onwuka and the #Merky team collected the previously unannounced Team Achievement Award in recognition of their contribution to British music and culture.

"My team is my everything," said Stormzy. "I've never been a part of something so extraordinary."

The 25-year-old described #Merky, which encompasses music management, a record label, book publishing, a clothing brand and scholarship scheme, as a "powerhouse" and "a family".

"I feel like I can pick up the phone to any one of these guys and my wildest dreams can come true," he said. "Everything I've done is a testament to these guys."

Organised by the Music Managers Forum (MMF) and Featured Artists Coalition (FAC), the A&MAs highlight achievement and excellence in the artist and management community.

"I, like Stormzy, believe that if it wasn't for my team and the people around me, I'd just be a guitar player," said Rodgers. "But it's the teamwork that makes it all happen. Believe it or not I've been doing this for a long time and I'm thrilled when I meet new artists and work with new people."

In addition, Rebecca Boulton and Andy Robinson of Prime Management were presented with the award for Managers’ Manager by their long-term clients New Order.

"It's fantastic to be recognised for the work we've done for the last 20 years with New Order and Joy Division, past and present, heart and soul," said Robinson, who paid tribute to their predecessor Rob Gretton, describing the legendary manager, who died in 1999, as a "very special person".

"Really, the biggest thanks must go to New Order themselves," he added. "Their creativity, talent and hard work is what makes it all happen. It's been an exciting ride, with just a few bumps along the way."

"We think management is about building a great team and having good relationships with those that we work with, so we're lucky to be working with some great people," added Boulton.

Liam Gallagher's co-manager Debbie Gwyther was presented with the Manager Of The Year Award by her UROK partners Roy and Sam Eldridge. Gallagher was unable to attend due to touring commitments, but sent a personal video of congratulations.

Lewis Capaldi, who was on the road in Finland, provided a more irreverent video to mark his win as Artist Of The Year. Sponsored by Selina, the award was accompanied by an all expenses paid week-long trip to Colombia to use the facilities at Selina Music Studio Medellin - which Capaldi gifted to 21-year-old singer Charlotte, one of the support acts on his recent tour.

.@AM_Awards Artist of the Year @LewisCapaldi said thanks like only he can... pic.twitter.com/O3nNl86UJK

Meanwhile, in their opening speeches, MMF CEO Annabella Coldrick and FAC founding board member Howard Jones both paid tribute to the work of Fiona McGugan, who has departed her role as MMF’s director of operations to take a new position at West End law firm Simons Muirhead & Burton.

The event, which also featured performances from Tom Grennan and Jvck James, was hosted by BBC Radio 1’s Huw Stephens.