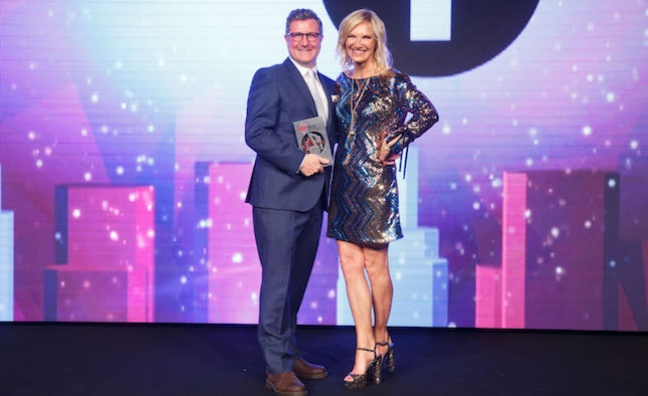 Yesterday evening (May 9) witnessed the biggest Music Week Awards in history, with over 1,300 people heading to London’s Battersea Evolution for the best and most prestigious night out in the biz.

As ever, it was a night that celebrated the cream of the crop in the world of labels, publishing, live, retail, A&R, radio, marketing and PR – and, given the record-breaking number of entries we received – it’s no surprise that the quality on display was world-beating.

Why walk up to the stage to collect your Strat Award when you can dance? Suffice to say Darcus Beese made the most of the rewind of Drake’s Started From The Bottom as he moved towards the mic, accepting his award from Dizzee Rascal, one of many past signings for the former Island teaboy. There was a buzz of anticipation in the room, as everyone waited to hear what the recently crowned president of Island Records US would have to say. Many in the biz know Beese as a man of few words, but those gathered in Battersea Evolution seemed to know he’d make them count. And he did – thanking family, friends and colleagues past and present to paint an evocative picture of his years in the industry. “My mind is blown,” he said. “You turn up here and you see people that win the Strat and [you think] there’s no way you’re gonna be on the list, no fucking way.” Beese noted that his first trip to the Music Week Awards was in 1994 and he empathised with winners and nominees alike. Now, 25 years later, he's won the biggest of them all, making him the first BAME winner of the Strat.

Atlantic won Promotions Team of the year but actually, thanks to Damian Christian’s address, they also picked up the Funniest Speech Of The Year Award, too. A worthy successor to last year’s comedic show-stealing display by Alex Hardee, Atlantic’s director of promotions gave a spectacular, expletive-ridden speech. Here’s one particularly wonderful extract for you to savour: “Over the years I’ve come here and been a bit cocky, usually I’m pissed up or on the mozam. Tonight I’ve had a couple of drinks, I’m going to be a bit more humble. I’ve got the utmost respect for everybody in promotions… Fuck off [to hecklers in the crowd]. Atlantic, we are the governors. I’ve got a few words of wisdom to the young people out there, there’s a lot of c***s in the music industry, my tip is make sure you don’t employ any of them. Because if you do, you’re fucked. I’ve always surrounded myself with good people.” Oh, and of course, he signed off with “I was told not to say this, but for old time’s sake: we’re Atlantic Records, we come in peace, but we’ll leave you in pieces.” SHOTS FIRED.

All the awards are fiercely-contested, but when it comes to competition the fight for Record Company Of The Year is as intense as it gets. Last year, the accolade went to Atlantic as they rode high on the blockbuster success of Ed Sheeran. This year, however, there was a change at the top with the Polydor team claiming the honour. And they all came onstage to join in the celebrations: seriously, we stopped counting as the stage invasion surpassed 14 people. Co-president Ben Mortimer followed by giving a heartfelt speech thanking their artists and team – and a funny one, too, when an accidental slip of the tongue led him to call Universal UK chairman/CEO David Joseph “Davis Jovis” before saying “I’ll get my P45”.

Taking over the mantle from last year’s host Lauren Laverne – who was still present on the night to win Best Radio Show, and who gave an impassioned speech saying, “I want to say to anyone out there that’s a young girl that wants to do the job that we do, keep coming, we need more of us!” – BBC Radio 2 DJ Jo Whiley was on hand to host proceedings. And she did an incredible job, leading with a speech that darted from discussion about new music heroes like Billie Eilish to streaming and the inescapable presence of film soundtracks. Whiley also referenced her own short-lived drive-time pairing with Simon Mayo. “Radio 2 conducted a daring experiment by broadcasting live water torture every weekday between 5 and 8pm. I am, of course joking," she said. “But I do want to point something out. Forget the headlines, the trolls and the endless letters of complaints to the Radio Times. There’s a lesson to be learnt here. Underneath all the noise and chatter on social media and the tabloid sensationalism, never let fake news get in the way of the actual facts. The final RAJARs for Radio 2’s drive-time programme showed that we’d put on 280,000 listeners. Funny that!” Point proven.

BBC 6 Music had won the coveted Best Radio Station Award for years and years on the trot, but no more. This year the award found a new home at BBC Radio 1, with Ben Cooper (pictured with Jo Whiley), controller of BBC Radio 1 and 1Xtra, even acknowledging, “I really wasn’t expecting this because I thought this was the 6 Music Award!” Cooper, in sentiments that echoed the whole spirit of the night, went on to praise the UK music industry as a whole: “I think we can all be incredibly proud to work in an industry that bats above its average,” he said. “The UK is such a small little island in the world, which has now become a global marketplace and we create the most amazing stars. I love that Radio 1 can be there with all its passion and creativity and surround your music with that energy, passion and creativity to make it stand out and come alive.”

Resident co-founder Natasha Youngs was a very surprised winner of the Independent Music Retailer award. “As you can tell I didn’t expect to win it so I have prepared literally nothing,” she laughed. But it was a fitting victory for the Brighton record shop, which turns 15 this year. Youngs used her platform as an opportunity to shine a spotlight on the whole sector. “We are the people that are talking to customers over the counter and doing the grassroots hard line stuff and we bloody love what we do, but it’s graft and it’s really hard graft and thank you for recognising it,” she said. “The team that I’m sitting with this evening is a great group of independent record shops and we are spread all over the country and we work really hard together. Actually, I kind of want to say that I feel a little bit like I’ve nicked this off them. We work really hard together and so I dedicate this to all the independent record shops in the country.” Cue: a massive round of applause.

You can find out all the winners from the Music Week Awards 2019 here.