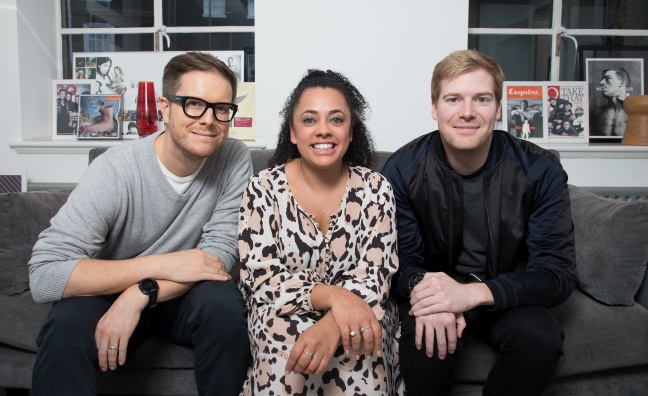 Sinclair, who has been at the company for more than eight years, will move into a role alongside founders Richard Dawes and Stuart Bell, running her own client list while still serving as senior counsel to the rest of the PR team.

Sinclair has previously worked on campaigns including 5SOS, Laura Mvula, Kelly Rowland, Shirley Ballas, Katherine Jenkins and Craig David’s comeback - for which she won a Music Week Award for PR Campaign Of The Year in 2017. She has recently added Cheryl Tweedy, Holly Willoughby and Rita Ora to her roster.

"It is a real privilege to be working alongside Rich and Stu for what I believe to be the strongest entertainment PR team in the UK," said Sinclair. "As the nature of music and entertainment PR evolves, it is important that we continue to adapt. Creating the strongest and most innovative PR campaigns for our clients will always be pivotal to what we do at DawBell, and it is what I have always loved most about what I do. It has been amazing to grow with a company that puts this at the forefront and I’m thrilled be starting this new role as head of PR at DawBell."

Sinclair will now move into focusing on key clients, while continuing to work with the senior team on new business procurement.

"When Laura first started at DawBell we had a roster of 25 clients with two global superstars on our books," said MD and co-founder Richard Dawes. "Now we have 70 clients with a much higher demand for senior expertise. We want to give our clients the best service they can possibly get and Laura has more than earned this new promotion to become one of our key players."

"We had a realisation last year that many PRs stop being PRs at mid-level and end up becoming managers," said MD and co-founder Stuart Bell. "This felt counterproductive for our clients and our staff. We wanted them to grow further to be the best PRs they can be and given more freedom to do so has made us a much stronger team."

Kate Etteridge (head of music and entertainment) will take over the day to day running of the music team with the support of James Windle (deputy head of music), while Holly Appleton (head of digital) will continue to oversee online PR and social media.

Click here to read the full story from this week's magazine.