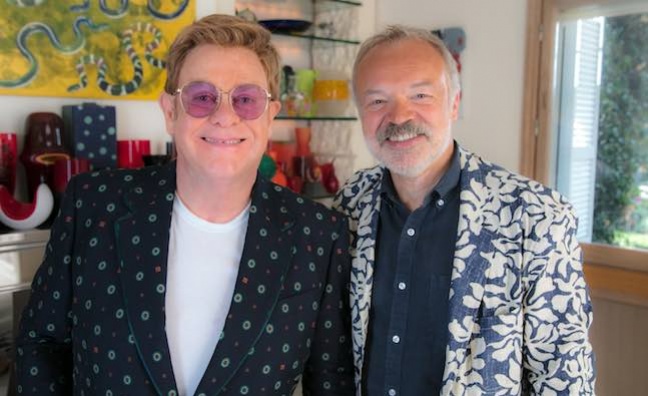 The show, which was recorded in the South of France in August, will coincide with the publication of Sir Elton’s autobiography.

Ken Bruce will also interview Elton for his BBC Radio 2 mid-morning show for his daily Tracks of my Years feature, to be broadcast across a week in October.

“The past two years have felt truly monumental for me, and with the release of Rocketman, the Farewell Yellow Brick Road tour and my autobiography coming up, it felt like the perfect opportunity to reflect on it all with Graham,” said Sir Elton. “I’ve always enjoyed our catch-ups and this felt like the best yet.”

Norton said: “Like the rest of the nation I'm a massive fan of Sir Elton John's music, but to sit down with him in his home to ask him about his life, career and family was a huge privilege. Funny, frank and fearless, I can't wait for people to hear him tell his story."

Jan Younghusband, head of TV commissioning, BBC Music, said: “BBC One brings the biggest music stars to television and national treasure Sir Elton John is absolutely one of the all-time greatest ever talents. A global superstar and huge personality, we are so thrilled to be treating audiences to this exclusive show.”

Suzy Lamb, MD, entertainment and music, BBC Studios, added: “In this special year for Elton John we were honoured to be invited to produce this exclusive interview in the South Of France. There is no one better than Graham Norton for Sir Elton to share his amazing life story with. Candid, funny and wickedly honest, prepare for the Rocketman to reveal all.”

Music television on the BBC this autumn includes series two of The Hit List (BBC One), a country music season across BBC Two, BBC Four and Radio 2, Last Night of the Proms (BBC One and Two), Pet Shop Boys: Radio 2 Live in Hyde Park (BBC Four), Later… with Jools Holland (BBC Two), as well as weekly live performances on The One Show and The Graham Norton Show.