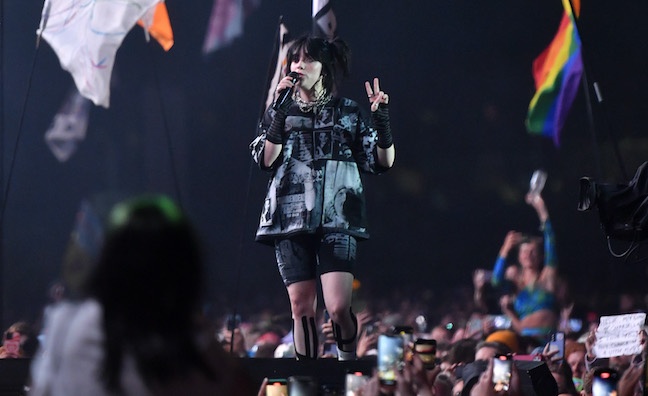 Ahead of this year’s Glastonbury, Music Week reported how the first edition of the festival since 2019 could deliver a boost to breakthrough artists who have emerged in the past few years

In the first snapshot of the festival’s chart impact, several acts - new and more established - have seen a significant Glastonbury boost.

The BBC has delivered comprehensive Glastonbury coverage across TV, radio, iPlayer and online. The streaming impact is subject to a reporting lag compared to pure sales registered by the Official Charts Company, so the initial results will favour acts who played the opening day at Glastonbury.

Billie Eilish has surged into the Top 10 with Happier Than Ever, following her appearance as the festival’s youngest ever headliner on Friday (June 24). According to midweek sales, Eilish’s second chart-topping album has climbed from No.28 to No.9 with sales up 115.3% week-on-week. Happier Than Ever has total sales to date of 174,540.

Sam Fender’s No.1 LP Seventeen Going Under has increased sales by 95.5% week-on-week. It has climbed from No.63 to No.14 following his appearance on the Pyramid Stage before Billie Eilish on Friday night. Its sales to date stand at 166,669.

Wet Leg secured a Park Stage afternoon slot on Friday, following their breakthrough with this year’s self-titled debut. The album has already increased sales by 55.3% so far this week, moving 77-25. Sales to date stand at 52,670.

Other acts enjoying a post-Glastonbury uplift include Arooj Aftab, with Vulture Prince (No.55), Robert Plant and Alison Krauss with Raise The Roof (No.56).

While sales and streaming data for the period after Diana Ross' performance is still to be finalised, the buzz surrounding the 'Legends Slot' has sent hits collection The Greatest to No.57 and 2021 studio album Thank You to No.100.

Official Charts Company chief executive Martin Talbot said: “Even though we have only received initial data from the weekend, it is already clear that Glastonbury Festival is having a huge impact. How huge will only become clear over the coming days, but the fact that Billie Eilish, Sam Fender and Wet Leg are surging already raises the possibility of a record impact from the world’s greatest music festival.”

Geoff Taylor, chief executive BPI, BRIT Awards & Mercury Prize, said: “The ‘Glastonbury effect’ often has a marked effect on sales and streams of music, but this year its impact is likely to be more pronounced than ever – in large part due to the fact many more of us stream now, but thanks also to the spectacular performances by Billie Eilish and Paul McCartney, which went beyond show-stealing, as well as by a generation of brilliant new British talent that has now truly come into its own – Arlo Parks, Glass Animals, Idles, Joy Crookes, Little Simz, Sam Fender and Wet Leg, to name just a few. Artists can expect to see multiple increases in their global number of streams, which already measure in the tens and hundreds of millions, as well as lifts in vinyl and CD sales.”

Music Week’s Midweek Charts reporting will cover the impact of Glastonbury this week, including for Saturday and Sunday headliners Paul McCartney and Kendrick Lamar.