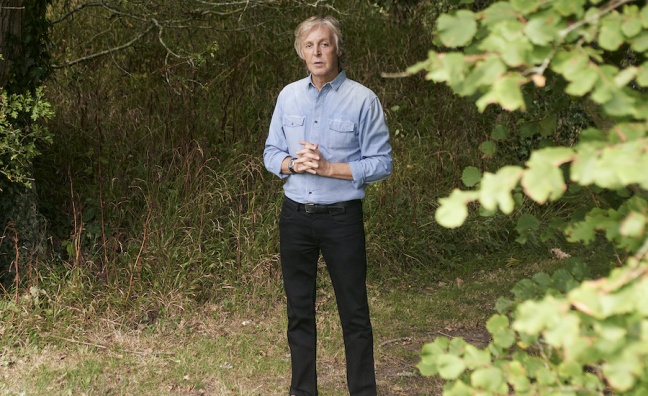 Glastonbury Festival is back next month (June 22-26) and the BBC is again on board as the broadcast partner.

The BBC has confirmed it will be airing sets from headliners Kendrick Lamar, Billie Eilish and Paul McCartney, along with Diana Ross in the ‘Legends’ slot.

Lorna Clarke, BBC director of music, said: “I’m very proud of the BBC’s long history of broadcasting from Glastonbury, the highlight of our Summer of Live Music. Our coverage this year will be our most extensive to date, with over 35 hours of programming across BBC One, Two, Three and Four, and over 40 hours on BBC iPlayer – in addition to digital live streams from the five biggest festival stages. We’ll also have wall-to-wall coverage on the BBC’s pop radio networks and BBC Sounds – with over 60 hours of broadcasts from the festival itself.

“For the first time, we’ll be showing sets from the Pyramid stage in Ultra High Definition, a fantastic progression in our Glastonbury story, which aims to help audiences access every epic musical moment. Our expert team of presenters will guide audiences around Worthy Farm, whilst BBC iPlayer - with its dedicated Glastonbury channel - and BBC Sounds will allow people to watch and listen on demand, throughout the festival weekend and beyond. Many thanks to Emily and Michael Eavis for once again allowing us to bring their incredible creation to millions of music lovers around the UK.”

Emily Eavis said: “It’s a joy to have the BBC and its brilliant team back and broadcasting live from Glastonbury for the first time since 2019 - continuing a special partnership that’s been evolving since 1997. I’m looking forward to Worthy Farm being filled with thousands of people once again and for millions more around the country being able to enjoy performances from our stellar line-up, courtesy of the BBC, wherever they are.”

On radio and BBC Sounds, 6 Music presents All Day Glastonbury from Wednesday, June 22, as Lauren Laverne broadcasts the opening of the Worthy Farm gates in her breakfast show that day (7.30am-10.30am). All Day Glastonbury continues on 6 Music throughout the weekend, in addition to extensive coverage on Radio 1, Radio 1Xtra and Radio 2, which sees Zoe Ball present her breakfast show from Worthy Farm on Friday, June 24.

BBC Glastonbury is part of BBC 100 - a year of special content, events and education initiatives to inform, educate and entertain the nation, marking 100 years of the BBC in 2022.

From the Thursday, BBC Two will broadcast a special 30-minute programme live from Worthy Farm. BBC One’s The One Show will also give audiences an insight with coverage from Worthy Farm on the Friday.

BBC One will be showing more performances on the channel than in previous years. Saturday will feature Olivia Rodrigo, followed by Paul McCartney on the Pyramid Stage – the first time BBC One has broadcast a Saturday night headliner.

On the Sunday, BBC One will show Diana Ross’ much anticipated performance in the legendary teatime slot on the Pyramid Stage.

BBC Two will reflect on the shows and stories from day one of the festival on the Friday, before focusing on the Pyramid Stage headline performance from Billie Eilish - Glastonbury’s youngest solo headliner to date. Also featuring on the channel will be Kendrick Lamar, who is headlining the Pyramid Stage on the Sunday night. Other artists whose performances will be shown on BBC Two across the weekend include Elbow, Jessie Ware, Joy Crookes, Lorde, Noel Gallagher’s High Flying Birds, Sam Fender and Years & Years.

After the festival, BBC Two will broadcast a round-up of the best of Glastonbury 2022 in a special highlights programme.

For the first time, BBC iPlayer’s dedicated Glastonbury channel will be live from Thursday to Sunday. The channel will feature the biggest sets from the Pyramid, Other, West Holts, John Peel and Park Stages, starting each day from Friday with a new daily live programme, previewing the day ahead and rounding-up the action so far.

Viewers will also be able to watch performances on the five main stages live and in full every day, as well as watching sets from the Pyramid Stage live in UHD.

Over 90 sets and key tracks from the five filmed stages will be available to watch on demand on BBC iPlayer throughout the weekend and for 30 days after broadcast  - including the selected Pyramid Stage performances in Ultra High Definition. Highlights from the UKs best emerging artists, performing on the BBC Music Introducing stage, will also be available to watch on BBC iPlayer after the event.

Photography from the weekend will be available on the BBC’s Glastonbury website at bbc.co.uk/glastonbury.

Radio 1 and Radio 1 Dance
Coverage kicks off on Radio 1 Dance on Thursday, June 23 from 7pm-12am, with a live broadcast of Radio 1 Dance’s takeover of the BBC Music Introducing Stage, hosted by Danny Howard and Jaguar. The programme will be simulcast on BBC Radio Somerset DAB and feature sets from some of the biggest names from the world of Introducing Dance.

Sian Eleri will be live from Pilton from 10pm-12am on the Friday night on Radio 1, to bring listeners the Pyramid Stage headline set from Billie Eilish. Plus, on the Friday, Saturday and Sunday, Vick Hope will be giving Radio 1 listeners regular live updates from Worthy Farm between 11am-3pm each day.

Radio 1Xtra
Tiffany Calver and DJ Target co-host a special show on the Saturday (9pm-11pm), which will be simulcast on Radio 1 and will feature live performances from some of 1Xtra’s favourite artists at Glastonbury. Tiffany Calver is back on the Sunday (9pm-12am) with Kendrick Lamar live on the Pyramid Stage.

Radio 2
The Zoe Ball Breakfast Show comes live from Glastonbury on the Friday (7am-10am), featuring live music and artist interviews. On the Saturday, Dermot O’Leary presents live from Worthy Farm (5pm-8pm) with the best of the festival so far. Paul McCartney At The BBC (8pm-9pm) features top performances and interviews from the BBC archives. OJ Borg’s show (9pm-12am) will include highlights of Paul McCartney’s Pyramid Stage performance.

6 Music
BBC Radio 6 Music will be the radio home of Glastonbury, providing All Day Glastonbury coverage from June 22-26.

On BBC Sounds, listeners will be able to follow live coverage from the festival from Wednesday, June 22 across BBC Radio 1, Radio 1 Dance, Radio 1Xtra, Radio 2, 6 Music and BBC Somerset with a single click.

Performances from the biggest artists on the main stages will be available to listen to on-demand across the weekend and after the event, as well as DJ sets recorded at the Arcadia, Stonebridge Bar, Shangri-La and Silver Hayes areas of the festival.

All Glastonbury programmes on BBC radio will be available to hear on demand on BBC Sounds after broadcast.

The BBC Music Introducing stage at Glastonbury turns 15 this year.

The BBC Music Introducing stage will be situated in the Interstage area of the festival, with the line-up curated by Wolf Alice (Friday, June 24), Idles (Saturday, June 25) and Arlo Parks (Sunday, June 26), through the Introducing shows across the UK.

Joel Amey of Wolf Alice said: “It was an honour and a thrill to be asked to help curate the BBC Music Introducing stage at Glastonbury this year; the future of music looks bright indeed!”

Idles said: “BBC Introducing has been pivotal in the growth and rise of Idles, their support even in the germinal days, when we had no idea, means the world to us. They opened doors and champion the new and exciting. They’ve (at their own risk) given us the opportunity to highlight some of our favourite new artists and hopefully open doors for them by curating the BBC Music Introducing Stage at Glastonbury, these are acts we believe will grace the Park, the Other, The Pyramid in years to come. Please support them where you can.”

Arlo Parks said: “Three years ago I played the BBC Music Introducing stage at Glastonbury and now I’ve been asked to curate the line up! It’s been such an honour to be able to uplift some incredible new artists whose flames already burn so bright - I can’t wait to see what they get up to next!”