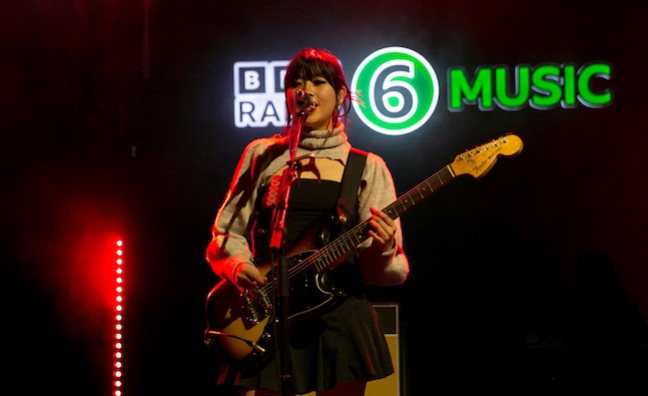 The RAJAR ratings are in for the first quarter period ending April 3.

RAJAR introduced a new measurement system in 2021, so year-on-year comparisons are not currently valid. All comparisons are quarter-on-quarter until the new system has five full quarters.

Digital listening share has increased to 67.9%, up from 64.5% in Q4 2021, boosted by the growth of online listening including via smart speakers, according to the Q1 figures. That’s the highest share recorded under any RAJAR system. Read on for the full analysis…

As well as celebrating its 20th anniversary in the first quarter of 2022, it’s now achieved “record” ratings. Strictly speaking this is a new measurement system, but the direction of travel has been clear for the alternative music digital network in recent years.

More than 2.8m listeners tuned in to BBC Radio 6 Music in the first quarter of the year as the station celebrated its 20th birthday and staged the BBC 6 Music Festival in Cardiff featuring Beabadoobee (pictured), Idles, Little Simz, Pixies, Self Esteem and more.

The station went from 2.604m in Q4 2021 to 2.846m in Q1 this year. 6 Music had its highest quarter since the new RAJAR methodology began (and above all previous measures) with 2.85m listeners. The network had 1.41m tuning in for its breakfast show with Lauren Laverne.

Samantha Moy, head of 6 Music, said: “I am so happy that more people than ever are listening to 6 Music in our 20th year. If you love music beyond the mainstream – we are your home – and we’ve room for everyone.”

Overall, BBC Radio has a weekly reach of 33.81m, with a share of 49.2%. There were also record results for BBC Sounds.

Charlotte Moore, BBC chief content officer, said: “How better to celebrate the 20th anniversary of the much loved BBC Radio 6 Music than with these figures! They really illustrate the unique place that the station has in its listeners’ lives, with its eclectic schedule and specialist, passionate DJs who day in day out champion music. Congratulations to everyone involved in making the station the success it continues to be!

“And what a way to mark the return of our live music festivals this year, as we emerge from the pandemic and look ahead to Radio 1’s Big Weekend in Coventry, an eight week season of the BBC Proms and Radio 2 Live in Leeds, bringing big acts and a wide range of performances to audiences across the UK. All our live stations provide millions of people with relevant, world class content so brilliantly, and we also continue to see BBC Sounds grow as listening habits evolve, particularly amongst younger audiences.”

BBC Radio 1Xtra had 749,000 listeners as it struggles to keep up with its 1m benchmark (although ratings edged up slightly). BBC Asian Network had 505,000 listeners.

Aled Haydn Jones, head of BBC Radio 1, said: “I’m very proud that Radio 1 continues to be the No.1 station for young people across the UK, and that Greg and the Breakfast show are also No.1 for our audience. In a quarter where [Covid] caused serious disruption to people’s lives, it’s good to see the strategy we’ve developed at Radio 1 is working, with a strong connection with young audiences across radio, YouTube, iPlayer and socials."

Meanwhile Capital Dance – fronted by MistaJam – continued its phenomenal rise as it grew its audience by 35.1% (208,000 listeners) in just three months to 800,000 listeners.

On social, Capital is the most followed radio brand in the world on TikTok. Capital’s Jingle Bell Ball with Barclaycard was livestreamed on the platform.

Ashley Tabor-King, founder & executive president of Global, said: “It’s an enormous privilege to have millions of people tuning in to our brands every day in increasing numbers. In these challenging times every single Globaller does their absolute best to bring our listeners news and analysis, relaxation and feelgood entertainment as well as the very best hit music. News and nostalgia are fuelling growth and we are here for our audiences every step of the way, constantly looking to innovate and build more of what people love.”

James Rea, director of broadcasting & content at Global, said: “It’s fantastic to see that radio remains such an essential part of people’s lives and listening continues to grow with Global’s best ever number and the highest ever reach for British commercial radio.”

Bauer Media Audio UK had a reach of 21m across its stations.

The media giant also highlighted its highest-ever digital listening profile of 76%, ahead of an industry average of 68%.

The Hits Radio Network was up to 5.798m (up 2.4% on the prior quarter). When partner stations are included, it is the UK’s biggest commercial network, with reach of 11m, according to Bauer.

Greatest Hits Radio Network continues its growth with a 25.9% increase to reach 4.184m.

Dee Ford, group managing director, Bauer Media Audio UK, said, “Who wouldn’t be delighted with these results? They really showcase how commercial radio is driving industry growth, with even more listeners tuning in than ever before. Audiences clearly love and trust radio and we’re proud to create world-class content and deliver it however listeners want it. That’s why we are digital market leaders.”

Ben Cooper, chief content and music officer, Bauer Media Audio UK, said, “What an amazingly successful time for the Hits Radio Network, growing its weekly audience to nearly six million listeners just after Hits Radio won the ARIAS UK Station of the Year. And the good times really do sound like this for Greatest Hits Radio, as Simon Mayo and the team set another new record high, with a reach of 4.2million, up a huge 26%.”