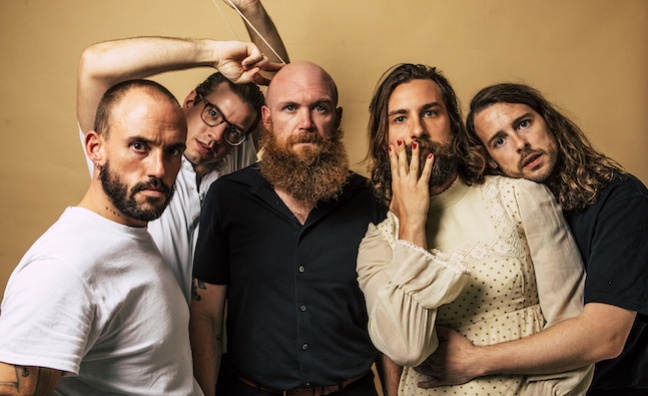 After Partisan’s previous chart battle between Fontaines DC and Taylor Swift in 2020, the label lost out to the US singer again this time - although Idles did claim the week’s best-selling vinyl LP with 9,584 copies.

Crawler is a more introspective album than last year’s Ultra Mono, which charted at the summit 13 months ago with 27,182 sales (and a total of 48,064 sales to date).

Idles have just finished a sold-out US tour and secured funding to boost their international touring. They return to the stage in the UK in January for a four-night stand at O2 Academy Brixton.

The success of both Idles and Fontaines DC helped Partisan retain the Independent Record Company trophy at the Music Week Awards.

In the new issue of Music Week, Partisan Records’ Brooklyn-based MD Zena White discusses big plans for the label and explores some of the key issues for the independent sector. Here, in a bonus online interview, she talks Music Week through an Idles campaign which continues where previous chart-topping album Ultra Mono left off…

How was Idles’ US tour - what were the challenges around Covid of playing in the country?

“One of the biggest hurdles was the visa situation for touring in America, but that all came through. We work really closely with our live teams across the board, they have been working really hard. And they have to be so reactive to all the challenges, but they're just able to pivot, and it's really impressive.”

The band weren’t able to tour Ultra Mono upon its release in 2020 because of the pandemic. How are they progressing in the US?

“What we experienced on the last campaign is that we were able to achieve a lot for them and really drive them forward critically and in terms of sales of their records, as well as build the fanbase. But because touring wasn't happening, there was a much steeper drop-off once the press cycle had run its course. So it was really interesting for Idles coming back around now, because really this was the Ultra Mono tour that got pushed back and it's become the Crawler tour. So fans are really excited, but are like, ‘Hang on a minute, have I missed the Ultra Mono moment?’

“It's hard to talk about Crawler without talking about Ultra Mono, because with Ultra Mono that was a record that was really written for performing live. The production was a huge step up, it was a lot more bombastic. So they were thinking about how these songs were going to sound in the live sphere. I think one of the band described [not touring it] as a slap in the face for fans who have been in lockdown, listening to Ultra Mono since it came out last September. For Crawler, the band just made the record that they've always wanted to make. It wasn't for anything other than themselves and, in many ways, it’s a lot more introspective. They were less afraid of making and recording songs that maybe don't immediately sound like what people think an Idles song should sound like.”

The lead single, The Beachland Ballroom, took some people by surprise...

“Ultimately, I feel like for us here at the label, having commercial success for alternative music of different genres is part of what we try to do. But it's about the art. So there's nothing more refreshing for us than a band making the record that they want to make, after having had commercial success to the level that they did with their last record. For the US, I think the word of mouth has grown from Ultra Mono to now. Anecdotally, there are a lot more US fans coming to the party, and I think the US tour is just really going to solidify that.”

How have the album campaigns and touring activity coalesced?

“It's hard for everyone now, no matter who they are except for maybe Adele, but even with her I'm really interested in how they're rolling things out. Look at what Taylor Swift has been doing through the pandemic. I think that the pandemic has thrown the old album cycle out of the window. Bands and managers have been forced to go where the money could take them. In an ideal world, given where Idles are as a band now, we'd have wanted them to be off the road [in the US] this year. But that's not possible, you can't turn around to a band now and say, ‘Hey, do you fancy not playing any shows when they haven't had any money?’ So this is Idles reconnecting with their fanbase in the States.”

How did they keep their close connection with the fans at shows amid ongoing concerns about Covid?

“They're not putting up Plexiglas between them and the fans, that's not an Idles show. The band are crowd-surfing just as much as the fans, although they’re definitely not face down crowd-surfing - it’s face up! They're restricting what they're doing outside of the shows, they're being as safe as possible on the road. But I think that this is a reconnection moment. And we've released Crawler coinciding with that. For the Brixton shows in London next year, there are definitely songs on [Crawler] that are going to be incredible, even some of the quieter, more introspective pieces of music. I think that those Brixton shows that you guys are going to have in London in January are going to kick off a different level of Idles’ career. It is going to be perfectly timed, because the fans are going to want to experience Crawler a little bit themselves before they get into the shows.”

Does it help Idles on streaming to have two albums’ worth of material released in a year, given that rock has sometimes struggled on DSPs compared to other genres?

“Yeah, and it's no secret that the next Fontaines DC record is also done. There was no judgement on artists in the pandemic if they didn't want to make music. But more often than not, I think productivity is tied to people's mental health. So they both just went immediately back into the studio when they couldn't be on tour. And that's really exciting for fans.

“I do think that with Idles, specifically, the difference in what Ultra Mono was musically and sonically, to what Crawler is musically and sonically within the space of a year is really going to turn some heads. And then on a completely different level, the difference between what A Hero’s Death and then the direction that Fontaines DC have taken on the new record is also going to really turn people's heads. Showing that guitar-driven music, rock music using organic instrumentation - although not completely on the new Idles record - is able to reinvent itself so quickly, I think is actually going to do great things for the genre overall. It’s going to bring more people to the party that had maybe still been a little bit undecided on whether it actually could be fresh and exciting again.”