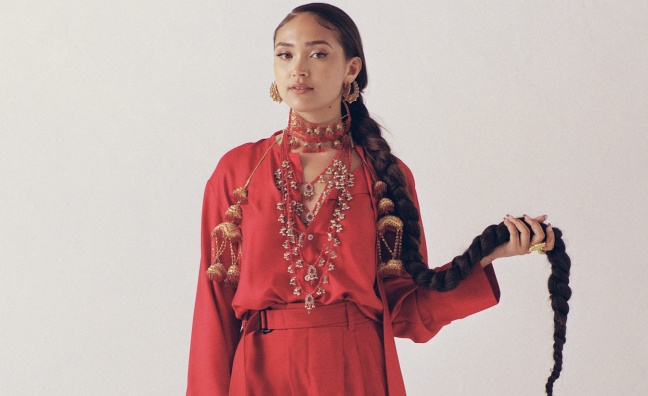 Joy Crookes broke through with her Top 5 debut album last year - now she has a chance to shine at the Glastonbury festival.

Glastonbury is back for the first time in three years this weekend, which makes it especially important for UK breakthrough acts of the last few years.

It’s set to be a significant event for Joy Crookes, who plays the Pyramid Stage on Saturday afternoon. Here, Kieran Cullen, senior marketing manager at Insanity Records, says the label is ready for her main stage moment…

How significant is the return of Glastonbury as a platform for Joy Crookes and breakthrough acts in general?

“Glastonbury is a vital pillar stone for artists, breakthrough or established. Its history and cultural significance lend integrity to the artists playing there and provide them a platform that reaches millions. For Joy, it will be the first chance for her to play her debut album Skin live at a UK festival, to a music obsessed audience, on one of the most iconic stages in the world. It’s a rite of passage and after such a painful hiatus for the festival, it’s going to be an incredible moment that will round up a really exciting debut album campaign.

“The last couple of years have felt bereft with the absence of Glastonbury and it often feels like a really representative round-up of what is important musically – which is something we’re really looking forward to experiencing again.”

How will you amplify your Glastonbury moment in terms of social and video content? How will TikTok be a key platform this time?

“One of the key social strategies for Joy has always been to subversively try and do things differently, breaking away from the obvious and expected. I think the approach to covering live shows, and particularly a cultural moment like Glastonbury, should be no different; anticipating what the ordinary content approach would be, and flipping it to find what is genuinely entertaining for Joy’s fans. Of course, we’ll be wanting to amplify the musical elements of the weekend, but also to give a real insight into what the experience of playing Glastonbury is like for Joy. Stripping back the ‘content facade’ and allowing fans to live those moments with her like they were there.”

How does the festival and BBC coverage boost a campaign - what plans do you have around the festival in terms of new music, releases or promotion?

“The TV coverage of the festival is fantastic, I think it really injects the festival atmosphere into homes everywhere. And its excellent curation of the eclectic line-up means unique talents from right across the spectrum of scale and genre are introduced to a huge audience at home. It turns those ‘you had to be there moments’ into something everyone can feel a part of and creates really important moments of musical history that are documented so well in terms of production quality.

“For Joy, it’s a chance for her to shine a light on the songs that were meant to be enjoyed outside and with people, away from the isolation of just streaming the record, but living the listening experience live with her and her band. It’s also a chance to bring the record to life, showcasing the rich arrangements and the incredible musicality of her live set up. With tracks like Feet Don’t Fail Me Now, the music will flourish, proving its gravity as a really important and anthemic record.”

“Glastonbury is recognised globally as being one of the most important weekends in the music calendar and so being able to prove your worth on those stages can offer huge value for your international live plot, in festivals and in venues, I think it can have a huge effect on the perception of what an artist it about, visually and musically.”