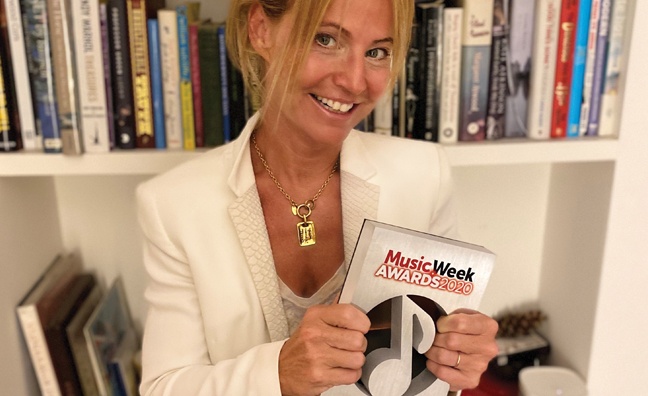 It was, for Head, a special award not just personally, but also because of what it represents: recognition for her entire profession.

“I really appreciate Music Week for ensuring, with this award, that PRs get recognised for their work,” said Kate Head. “I believe that PRs remain unequivocally key to an artist's career. We do a lot more than ‘get press’. We wear many hats - we may assume the roles and responsibilities of a writer, creative director, fire fighter, therapist, content producer, project manager, events organiser, travel agent and more on any one day. But we aren’t always appreciated or recognised for it. Honours like this ensure we are.”

As the media landscape has radically changed over recent years, Music Week wondered if there was one one guiding PR principle that may have helped Head along the way?

“Over the years I’ve been working in media and music, the landscape has perennially evolved, and the approach to PR has needed to evolve alongside it,” said Head. “However, a few things have remained the same: A good PR campaign, in my opinion, needs to be strategic, creative and delivered with passion. But above all, a good PR campaign needs to tell a story – an arresting story that is rooted in the truth of the artist and their art. Human beings have engaged in storytelling since the Stone Age and whether we’re writing on cave walls or smartphones this has not changed, and I doubt it ever will. So I guess that would be my No.1 guiding principle: to find the story, agree on the story with the artist and then tell it to the media in such a way that they’re inspired to tell it to their audience.”

Head’s PR campaign for Krept & Konan – which had to navigate Krept being stabbed a few weeks prior to the album’s release – was incredibly broad in its remit. Indeed, as Head stated, “the scope of the campaign went beyond promoting an album, by addressing and raising awareness of socio-political issues such as the police persecution of black artists and the mental health of young black men in this country.” Head told Music Week about some of the most important parts of the campaign…

“There are a few moments that stand out to me,” said Head. “Firstly, when I was in the House Of Commons, watching Krept and Konan sit alongside Diane Abbott talking about why they made ‘Ban Drill’, why they vehemently believe the authorities should not be targeting drill artists, and providing solutions and suggestions to tackle some of the issues drill artists’ lyrics touch on, since, as they pointed out so succinctly, life doesn’t imitate art, art imitates life. They were articulate, informed, and ultimately, very convincing. I’m proud of ensuring they got the opportunity to have their voices heard in a forum, which was far from their usual stomping ground and comfort zone. Secondly, hearing Krept & Konan, alongside Ramz, speak so candidly and lucidly with The Guardian about the battles young black men face with mental health, a subject which the album touched on. And, finally, watching Krept & Konan on stage at the O2 deliver a formidable set to a rapturous crowd – their best show yet – and then waking up the next day to well-deserved 5* live reviews.”

A campaign as multi-faceted in nature as this has not been without its learning moments.

“In terms of the biggest lesson, I learned that we still have a huge fight on our hands when it comes to representing black artists and their music,” Head told Music Week. “Whether it was Trident shutting down Giggs’ shows and sending letters to labels telling them not to sign him, or the simply unacceptable Form 696, or, more recently, the CPS’ attempts to censor and incriminate Drill acts, the British government for many years now has not only failed black artists, but has actively tried to destroy their careers. Meanwhile they are doing less and less to support the communities that many of these artists come from. The first British hip-hop record I worked, over 20 years ago now, came from an act from Stonebridge Estate who had access to a studio because of a youth project funded by Brent Council – a sober reminder of how far things have regressed since those days. It makes me sad, and it makes me very, very angry. Things have to change, and we all, collectively, have to do whatever it takes to ensure they do.”

Head also used her interview to salute both Krept & Konan, their managers Riki Bleau and Karen Sibindi and their teams, both past and present.

“I want to thank Riki Bleau and especially Karen Sibindi, who helped ensure all my ideas, all my promo, came to fruition,” said Head. “The team at Virgin EMI – Afryea Henry-Fontaine, Mike Rivalland, Ted Cockle, Rob Pascoe, Andy Knox and rising star Patricia Odje. Tom March for convincing me back in 2015 to start working with Krept & Konan. Those media who have perennially supported the boys and last, but by no means least, Krept & Konan themselves. Thank you Krept, thank you Konan for consistently delivering outstanding music, compelling narratives, ambitious enterprises –– that you actually pull off in spite of the odds! – and for being so inspirational and such incredible fun to work with. I enjoy every moment of every campaign with you. You are indeed GOAT Level. I’m speaking from the heart when I say it is not only a privilege and honour to work with you, but also something I absolutely love doing.”

You can revisiit our 2019 cover feature with Krept & Konan here.