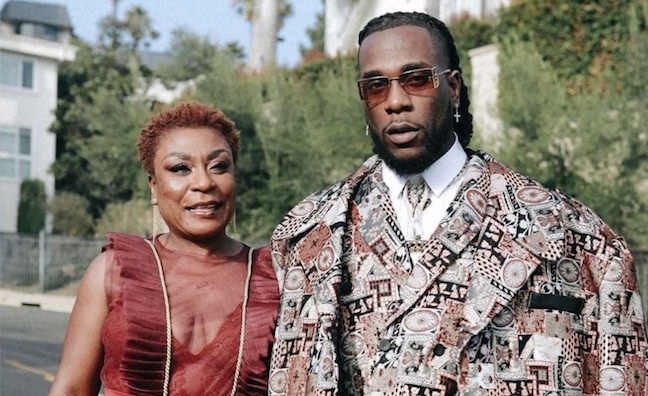 The awards take place at London’s Bloomsbury Big Top on November 17. Tickets are on sale now.

As the co-founder of Spaceship Collective and long-time manager of Burna Boy, Bose Ogulu was a unanimous choice for Manager of the Year (sponsored by YouTube Music). With deep roots in the music scene of Lagos, she has overseen her son’s gradual rise to global stardom, including his breakthrough album African Giant in 2019, the Grammy-winning Twice As Tall in 2020 (on which Bose was co-executive producer), and this year’s UK No.2 LP Love Damini. Last Last, which peaked at No.4, is the 35th biggest single of the year.

Bose has maintained tight links with the UK, including a long-term base in London. Burna Boy has collaborated with a wide range of UK artists including Stormzy, J Hus, Dave, Jorja Smith, Ed Sheeran, Chris Martin, Mabel, and Lily Allen, alongside producers including Steel Banglez, P2J, Fred Gibson & Jae5.

Bose also co-founded the Spaceship Collective entertainment company in 2020. It combines divisions in recorded music and music publishing, and provides a foundation for other African artists to maintain greater control and ownership of their repertoire. In addition to Burna Boy, Spaceship’s other signings include Nissi, Leriq and Telz.

Annabella Coldrick, chief executive, Music Managers Forum, said: “Everyone at the MMF would like to congratulate Bose on her award for Manager of the Year, and we look forward to celebrating with her on November 17th. Bose’s boundary-breaking and artist-led approach to business has undoubtedly helped Burna Boy develop into a genuinely global talent, while Spaceship Collective and its ethos of empowerment epitomises her positive impact on a new generation of artists. It is an African success story, but with a major foot in the UK - and we felt it important to recognise the success of such a prominent groundbreaking manager.”

Alongside Bose, the Awards will celebrate individuals for their achievements as pioneers, innovators and entrepreneurs.

Carl Cox will be the recipient of the Pioneer Award (sponsored by TikTok). Across a 30-plus year career, he has been a recording artist, producer label owner, headlining DJ and broadcaster.

Carl Cox published his autobiography, Oh Yes Oh Yes!, in April 2021, and will release his first studio artist album in a decade later this month. He headlines OVO Arena Wembley on Saturday.

For the Innovation Award (sponsored by Utopia), the Artist & Manager Awards will recognise the achievements of Svana Gisla, Ludvig Andersson and Baillie Walsh, the show producers and director behind ABBA Voyage. ABBA Voyage has enhanced the power of the group’s timeless catalogue.

For the Entrepreneur Award, FAC and MMF are acknowledging the impact of Krept & Konan. As well as  Top 5 albums, MOBO and BET Awards, and arena-scale live shows, the duo have shown an entrepreneurial streak, including the launch of the Play Dirty clothing line and soul food restaurant Crepes & Cones.

David Martin, CEO, Featured Artists Coalition, said: “I’m so happy we can celebrate such a wide-ranging and eclectic group of artists at the Awards. I’m particularly delighted that the FAC can pay tribute to Carl Cox’s achievements as a pioneer. His influence on bringing techno and electronic music to the world is simply staggering. Equally remarkable is the sheer innovation behind ABBA Voyage and the entrepreneurial drive of Krept & Konan. All demonstrate how artists continue to operate outside the box and thrive in exciting new areas.”

Other previously announced winners at the 2022 Artist & Manager Awards in Association with BeatBread will be Becky Hill (Artist of the Year) and Martin Hall (Managers’ Manager, sponsored by SJM Concerts).