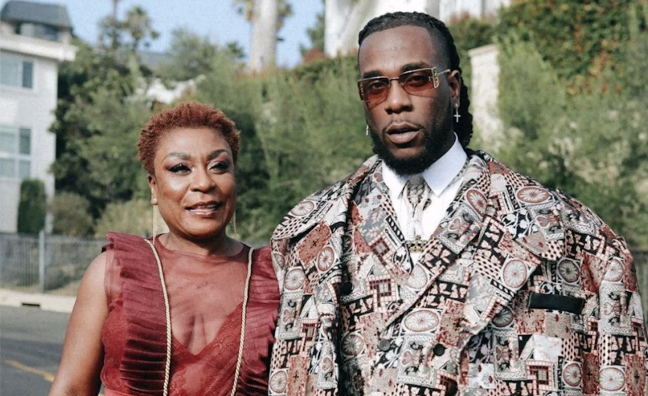 Bose Ogulu, Burna Boy's mother and manager, has told Music Week how she and her team are seeking to make a lasting impact on the music business and the world.

Earlier this year, Ogulu and her team, which includes daughter Ronami as creative and brand executive, announced the launch of Spaceship Collective, which expanded Burna Boy’s label imprint into a records and publishing business.

“The reason for the record arm is simply to provide structure, the kind we couldn’t have,” Ogulu told Music Week, in an interview for this week’s Burna Boy cover story. “For the publishing, the motive is to ensure as much as possible that catalogue for African artists remain in Africa.”

Ogulu’s father Benson Idonije was Fela Kuti’s first manager, and she said that the family home was full of musicians, from Fela Kuti himself, to Roy Ayers, Ginger Baker, Stevie Wonder and more. She began managing her son full-time in 2017, and helped secure his major label partnership with Atlantic/Bad Habit.

Nine of the 15 songs on Burna Boy’s recent Twice As Tall album, which just secured him his second consecutive Grammy nomination, were produced in house at the Spaceship Collective. Ogulu told Music Week that she and her team want to continue to make an international impact with Burna Boy, spreading his pan-Africanist message.

When she accepted Burna’s BET Award at last summer’s ceremony, Ogulu said, “The message from Burna would be that every black person should please remember that you were Africans before you became anything else”.

“To work with Burna or any of us, you need to have an understanding of who we are, where we’re coming from and how we want to carry ourselves,” she told Music Week.

Here, Ogulu tells the story of how she navigated the major label system to best promote her son’s music, and speaks about his lasting impact.

How did you end up with major label involvement?

“Burna started in October 2010, I think by 2016 I felt, clearly, his music would do much better out there than most people who were trying to give it a shot. I’m big on structure and getting a team that’s solid. I thought to myself, ‘We need to get him and the music across’. But it had to be done in a way that didn’t dilute him, his message or his music. Also, I realised a long time ago that labels are not interested in you because they like you, they’re interested in you because it’s a business, so the goal is to make money. Ask yourself, ‘What do I need a label for?’ It’s not just about the cheque you’re going to get as an advance, fortunately at that point he was doing enough shows in Africa not to need that. We needed machinery that we didn’t have. We had the talent, we had the music, we had the structure in Africa, but we needed some type of bridge to take us to where we were going, I thought we needed a label.

So, what happened next?

“Between 2016 and 2017 I had so many meetings in London and drank so much bad coffee, because that’s what happens at those meetings. I went through a lot of them, I didn’t say I was looking for anyone, they just showed up. I had a lot of meetings and I just never felt right. We weren’t in a hurry. First it was Twin (Alec Boateng), who just showed and was like, ‘Look, this guy, his music is different and we want to do something with him’. I remember going to his office and seeing Ed Sheeran’s poster on the wall and saying, ‘Is he with you?’ and he said yes. I said ‘get me Ed Sheeran and then we’ll talk’. Then in 2017 we had two guys from Bad Habit who came to London and reached out. They didn’t come with any of the, ‘This is what we can do for you’ type of thing, it was more of a ‘You can do something for us, we can do this together, let’s just understand you’. We weren’t looking to ride on anyone’s backs or have all the accolades given to that person and then stripping ourselves and our continent of our achievements. We didn’t want a label to say, ‘This is a sound that’s going to pop, this is how you need to sound if you want a platinum album’. We weren’t looking to do that, you need to sift through a lot of people. A lot of the work I had to do was figuring out which machinery would be a good fit for Burna. It’s never perfect but I think, with Bad Habit, we managed to make it work.”

We had the structure in Africa, but we needed a bridge to take us to where we were going

Does your team retain lots of control?

“We weren’t after the promise of the advance, a cheque or features. A lot of the features he’s done didn’t come from the label, he’s an artist’s artist, we’re lucky that artists respect him and they want to work with him. The label is serving its purpose, we were clear and we are still clear on what we want to achieve with the label, we never saw it as a magical fix, we went into the agreement with our own team, with me still managing him and being the one who makes the final decisions, and we have our own PR. We wanted to the message to be the same, even though they have very competent people at Atlantic in different departments, it just goes through the core Burna team so that the message, the branding, everything is the same and he’s being looked after in a way that is sustainable, in what I call the usual American culture of the artist having an expiry date and needing to sell all the records in two, three or four years.”

Did you anticipate Burna Boy would have as much influence on international music cultures as he has?

“I actually did. You just need to look at his trajectory to understand that. Even though he knows who he is, where he’s from and what his message is, he’s been exposed to a lot of cultures. He lived in the UK for a while, he was on the streets and dabbled in the underground scene. The UK people feel like he’s from there, in a way. So I’m not surprised about that at all. I used to do excursion trips for young people, I would take them to places like France for three months every year and he was part of that. There’s some French influence, there’s a lot in him that comes out from time to time, so that makes him feel comfortable with a lot of different types of music.”

What does he mean to music now?

“As his manager, I would say the best thing about him is his talent. I can’t sell what I don’t believe in. I’m a fan first. The next thing is his conviction and the fact he doesn’t feel the need to conform to make life easy for himself, his convictions are the same at any time of the day, regardless of who his audience is. I obviously believe in the message, I am unapologetically pan-Africanist. It’s talent, consistency, conviction  and insistence on not watering down his message, his respect for cultures, no matter how different they are. These are the things that stand out, his music is going to resonate for the next century.”