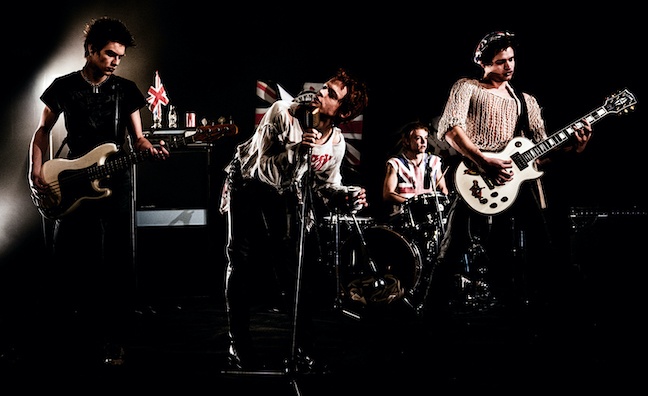 John Lydon has lost a court battle with his former Sex Pistols bandmates over the use of the legendary punk group’s music in a new TV drama.

A High Court judge has ruled that the Sex Pistols’ music can be featured in director Danny Boyle’s six-part series, based on a 2016 memoir by guitarist Steve Jones. The written judgement was handed down on Monday (August 23).

Jones and former Sex Pistols drummer Paul Cook had sued Lydon in order to allow the punk band’s songs to be used in the TV drama, which is being produced by Disney to air on the FX channel.

John Lydon’s lawyers claimed the series, titled Pistol, portrays the singer - who performed as Johnny Rotten in the Sex Pistols - in a “hostile and unflattering light”.

The show, which has been filming during the pandemic (pictured), stars Anson Boon as John Lydon, Toby Wallace as Steve Jones, Jacob Slater as Paul Cook, Louis Partridge as Sid Vicious and Christian Lees as Glen Matlock, Thomas Brodie-Sangster as manager Malcolm McLaren.

The judge ruled that a majority of the band can overrule any individual member’s veto on a licensing proposal.

The case centres on a 1988 contract signed by Lydon, Jones and Cook that said licenses for the Sex Pistols’ music could be granted by agreement from the majority of the band. Cook and Jones pursued the lawsuit to enforce that contract, while Lydon contested that it had never been adhered to previously and that licenses were, accordingly, subject to individual vetoes.

The Sex Pistols catalogue is owned by Universal Music Group and released by UMC. The songs are published by UMPG.

During the legal case, it emerged that Lydon had previously vetoed use of the band’s music in Netflix series The Crown amid concerns that it would “distort history.”

“We welcome the court’s ruling in this case,” Steve Jones and Paul Cook said in a statement. “It brings clarity to our decision making and upholds the band members’ agreement on collective decision making. It has not been a pleasant experience, but we believe it was necessary to allow us to move forward and hopefully work together in the future with better relations.”

When the series was announced earlier this year, Danny Boyle said: “Imagine breaking into the world of The Crown and Downton Abbey with your mates and screaming your songs and your fury at all they represent. This is the moment that British society and culture changed forever.”