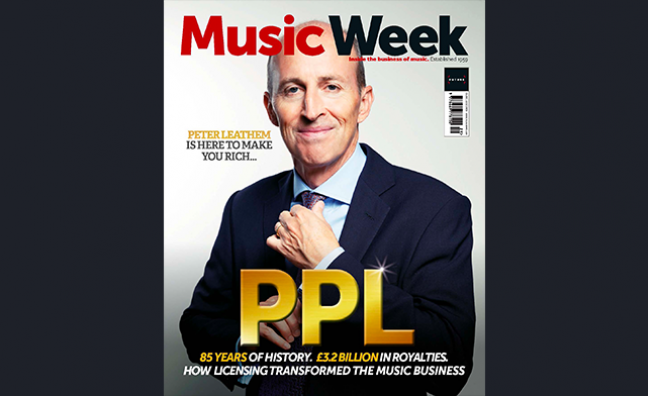 The new issue of Music Week is out now, and our cover story celebrates the 85th anniversary of PPL, not to mention the £3.2 billion it has raised for the music business.

CEO Peter Leathem stars on the cover, looking back at PPL’s storied history and gazing into the future in an extensive interview that underlines just how important the organisation is to the biz.

Also inside, we tell the story of Communion Music Group, beginning with its indie origins in West London and motoring right up to its modern day empire.

This week’s Big Story sees leading executives debate the possible impact of the government reshuffle on the music biz, as the Conservative leadership contest nears its conclusion.

We’re breaking huge news from Coda and Paradigm, and Cooking Vinyl too, and we bring you exclusive interviews with the key players to get the lowdown on the big stories.

We tell the story of the one of the biggest pop hits of modern times in Hitmakers, as Camille ‘Kamille’ Purcell reveals how Clean Bandit’s Solo was made.

There’s rock royalty in The Aftershow this week, as Music For Nations boss Julie Weir dishes out her life lessons.

South London chiller Greentea Peng is On The Radar, Working Men’s Club feature in Making Waves and we reveal how Red Dwarf came to hook up with the AA in sync story.

Alongside all that, there’s the very latest news, charts, analysis and market shares.

The issue is available now. To subscribe to Music Week and never miss a vital music biz story, click here.