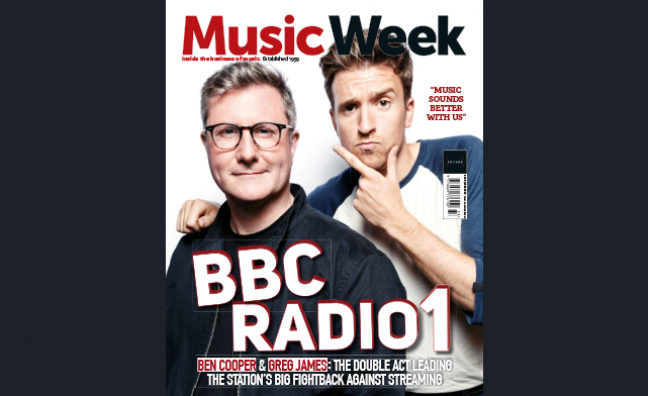 The new issue of Music Week is out now and, inside, we welcome Greg James and BBC Radio 1 controller Ben Cooper to the cover to celebrate the first anniversary of the DJ hosting the BBC Radio 1 Breakast Show.

In our in-depth feature, we chat to James and Cooper about how the station is breaking new acts, fighting back against streaming and getting audiences more involved than ever before.

Elsewhere in the issue, as LA metal quartet Tool prepare to release their first album in 13 years, Music Week speaks to their manager Pete Riedling, as well as Music For Nations label head Julie Weir and RCA co-president John Fleckenstein about a comeback campaign like no other…

On top of that, exiting PRS Foundation CEO Vanessa Reed reflects on her achievements before she heads to New York for a new role, while 2000 Trees founder James Scarlett reveals how they built a burgeoning mini-festival from scratch.

This week's news section is led by Festival Republic MD Melvin Benn, who talks us through this year’s blockbuster Reading & Leeds Festival line-up. In addition, Since ’93 co-presidents talk about their breakthrough stars Fredo and Aitch plus we get the lowdown on retail preparations for Taylor Swift’s Lover album.

In Hitmakers, reunited Shakespears Sisters duo Siobhan Fahey and Marcella Detroit tell all about the making of their huge single Stay, while BBC Radio 2 legend Trevor Nelson looks back on his incredible career so far in Aftershow..

Mixmag staff writer Jasmine Kent-Smith tells us about her favourite new sounds in Tastemakers and BT Sport/Swindle is the focus of Sync Story.