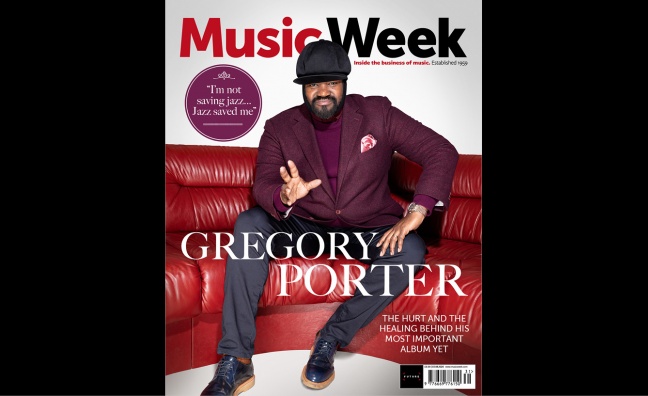 The new issue of Music Week is out now, and we’re celebrating the career of modern jazz phenomenon Gregory Porter, who’s about to release his most important album yet.

All Rise is released via Blue Note Records/Universal Music Group on August 28, and we catch up with Porter, Wingsmusic’s Paul Ewings and Laura Monks of UK label Decca to tell the story of an album fuelled by hurt and healing.

Porter’s place at the forefront of modern jazz and soul is long-cemented, but All Rise, he tells us, represents a watershed moment.

Rise Above Hate, the Top 20 debut mixtape from Unknown T is a similarly seismic record, and we meet the East London rapper to hear how he’s bringing a fresh approach to drill, the UK rap subgenre he helped pioneer.

Released via Island, Unknown T’s mixtape tells the story of his rapid rise, which was interrupted by an eight-month stint on remand. In an intimate interview, he reveals his plan to help shape a brighter future, for drill and Britain’s youth at large.

Also in a packed features section, we catch up with Manic Street Preachers leader and rock icon James Dean Bradfield, who’s on typically vibrant form ahead of his new solo record, Even In Exile.

Paradigm’s Alex Hardee flexes his comedy muscles in The Aftershow, and we talk to Imanbek to reveal how he turned Saint Jhn’s Roses into a chart monster in Hitmakers.

Elsewhere, Delilah Montagu sets out her pop vision in On The Radar, bedroom pop hero Cavetown is in Making Waves and there’s a Sync Story from Ridley Scott and Marina. This week’s Rising Star is Kiss DJ Ben Malone.

Alongside all of that, we bring you the very latest news charts and analysis.

* To subscribe and never miss a music biz story, click here. To order your print edition, email Rachael Hampton on rachael.hampton@futurenet.com. Make sure you can access vital music biz information wherever you are by signing up for our digital edition here.