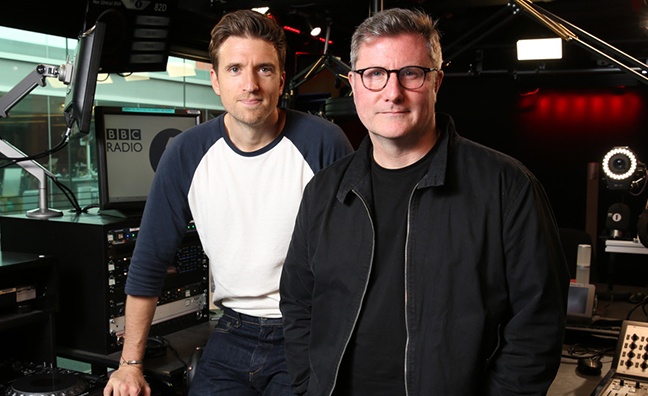 BBC Radio 1 controller Ben Cooper has said that his station is “innovating faster than anyone else in the industry”.

Cooper was speaking to Music Week alongside Breakfast Show presenter Greg James for this week’s cover interview. Inside James’ studio, Cooper spoke proudly of the station he’s built over his eight-year controllership. Radio 1 scooped the Radio Station gong at the Music Week Awards this year, while James celebrated his first anniversary on the Breakfast Show this month.

“At the beginning of my controllership, the youth market was changing, I needed to be an expert in it and understand how we could find new audiences in new ways,” Cooper said. “You got that sense [from the industry] of, ‘What are you guys doing again? Because we’re all a bit doom and gloom in our markets, how come you’re so enthusiastic and passionate about radio?’”

Cooper said this enthusiasm and passion have been key to Radio 1’ enduring success.

“We had a belief that we knew our audiences ?better than anyone else and we can create something magical that has energy and community,” he said. “People want that sense of zeitgeist, that energy. That’s what? we’ve managed to foster.”

We are a multi-media, multi-platform brand

The former Capital executive denied that radio is a declining part of the business and said Radio 1 – which recently reached the milestone of more visual subscribers than listeners – is thriving in the streaming age.

“We’ve still got over 10 million listeners a week. Everyone thinks you’re slowly managing decline. No, not at all,” said Cooper. “We’re innovating faster than anyone else in the industry. We’ve stopped thinking of ourselves as a linear radio station. The radio station is the train that pulls the carriages, but we are a multi-media, multi-platform brand.”

Cooper believes that Radio 1 remains “the place you break an artist” and said. “We make a difference”.

“The UK punches above its weight in terms of the power of its music across the world,” he said. “When I meet record executives in LA or New York, they will talk about the fact that they still have to check what’s on the Radio 1 playlist every week because it’s the place you break an artist, not just in the UK, but in North America – and that is something we take great pride in.”

Cooper is positive about the future, dismissing the notion of competitiveness with Radio 1’s commercial rivals and saying, “I want the radio industry to be successful”.

“Previously, you’d look at your commercial radio competitors and we’re way beyond that now,” he said. “It’s about what young people can do with their phone and their time. How can we make sure we’re a relevant part of their lives?”