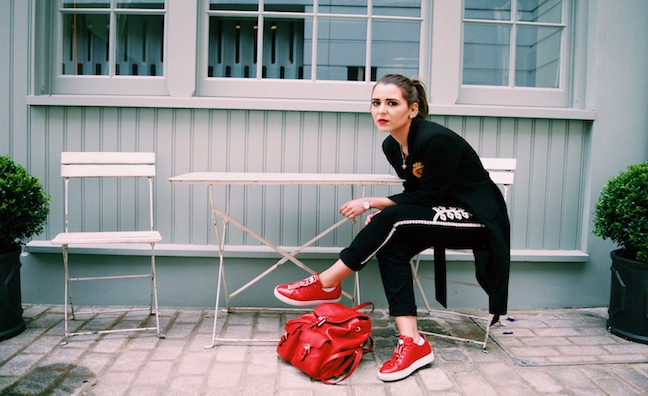 A triple threat - Producer, writer and singer, Raphaella unleashes her first solo release of the year with ‘Turn Around’ co-produced with Brendan Grieve.

Reaching #3 in the Hype Machine Chart the slick, stripped-back synth instrumental acts as a perfect foil to showcase Raphaella's characterful burnished vocal with her signature Persian flavour interweaved within layers of synths. A track that could well be a year-defining one for the Artist ‘Turn Around’ sees Raphaella step up to stake her claim alongside some of the best releases of the year.

You may already be familiar with Raphaella’s vocal and vocal samples on a number of heavily supported releases at BBC Radio 1 and 1Xtra as she's been collaborating with a plethora of emerging and heavyweight talent such as Rudimental, Gorgon City and MNEK, Wilkinson, Armin Van Buuren, Watermat, Henri PFR, Dimension, Culture Shock, NVOY, Michael Calfan, MIST, Kideko, Jack Wins, Yungen, Friction, Dirtcaps, amongst others, recording and vocal producing the majority of her features from her studio in north London where she produces her own material and for other artists too.

Speaking on the record, Raphaella states: “Turn Around is about the moment you walk away from someone because you know they're no good for you. Your head has made the decision, but you know your heart could betray you any moment. Turn Around is the last song before letting go.”

Attending many international songwriting camps as a writer, producer and guest panellist, Raphaella - a classically trained musician started her musical journey at Goldsmiths University transferring mid course to The Institute of Contemporary Music Performance, graduating with a 1st class honours degree and winning the award for most outstanding Bmus student in her year. Within months of graduating Raphaella signed a publishing deal with respected independent Phrased Differently and has gone on to receive Platinum and Gold Awards for her songwriting and has scored music broadcast on BBC Radio 4. Her songwriting cuts for other Artists include ‘Yellow Claw - Love & War’ amassing over 25 million Spotify streams and K-pops EXO ‘Thunder’ (Overdose mini album No 1 USA Heat seekers Billboard chart and recorded over 660,000 pr-orders the highest number ever reached at that time).

Dimension - ‘Pull Me Under’ favoured by Annie Mac and Danny Howard topping the Radio 1 Dance anthems charts for four weeks and was synced with Xbox Forza Horizon. Raphaella's collaborations with Zed Bias ‘Dropping Like Flies’ and his remixes of some of her solo releases resulted in a number of DJ Target ‘Targo Embargo’s and Mistajam ‘Radio Ripper’s on Radio 1 and 1xtra. Big support from Yasser at the BBC Asian network and BBC London’s Dan Roberts and Gary Crowley has seen Raphaella play the BBC Introducing stage at Bestival, BBC Maida Vale and Concrete.

2017 is set to be a very exciting and busy year for Raphaella with further solo releases, collaborations, productions and features to be released. You can also catch Raphaella at Pukklepop this August performing with Henri PFR.

Sounds Like: FKA Twigs and James Blake on a Magic Carpet ride

Mixed by: Richard Wilkinson at 212 Studios