Going solo: Can music still make the people come together under lockdown? 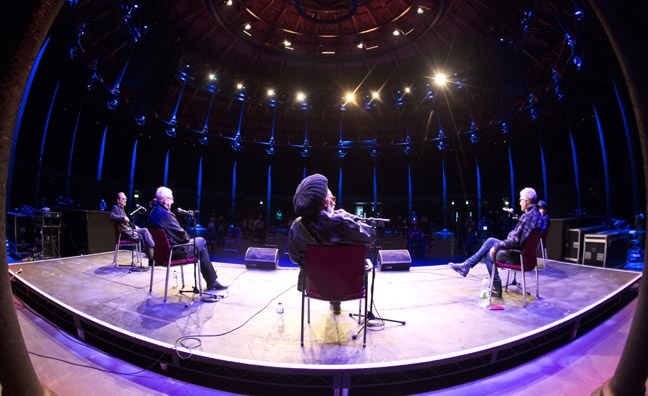 I attended my first press conference since the first UK lockdown last week.

It was efficiently and safely organised by the Outside Organisation, and The Damned (pictured on stage with Don Letts at The Roundhouse) provided some knockabout laughs as they discussed their reunion, but it was still odd to sit several metres away from the other journalists, rather than amidst the conspiratorial scrum you usually find at such events.

A couple of weeks earlier, I attended my first gig since the pandemic kicked in. Again, Louise Redknapp and Clapham Grand put on a Covid-secure, well-run and fun show, but it still took some adjusting to watch live music from a small booth, and have waiters bring you your drink, even if a moshpit was never likely to be on the cards.

Needs must and all that, and the cabaret-style, intimate seated gig, perhaps with dinner included, could yet provide a working alternative for some artists until normality returns. Ronnie Scott’s is always a great night out, after all.

But the longer we socially distance, the more music becomes a solitary activity. Recorded music has long been internalised: downloaded on phones and listened to on headphones, rather than selected from record shop racks and blared out from boomboxes.

Madonna once noted that music makes the people come together, but right now it makes them sit apart – and doesn’t let them sing or dance either

But what little live music is possible in the current situation is also becoming a solo rather than communal pastime, watched alone on screens or in small, secluded groups. Madonna once noted that music makes the people come together, but right now it makes them sit apart – and doesn’t let them sing or dance either.

Until Tier 2 kicked in in London, at least in-person music biz meetings had been briefly back on the agenda. But now top execs will be forced to shiver outside if they want a pint and a gossip with someone outside their bubble.

By now, we should be deep into awards season – our own Women In Music Awards should have taken place on Friday, although at least we were still able to present an expanded Roll Of Honour this year – and looking forward to Christmas parties, always a chance for the industry to celebrate its achievements and have some fun. Instead, it looks like a long, hard winter of Zoom calls and cancelled plans.

But, however long we spend apart, we mustn’t forget that music thrives on togetherness. Whenever events come back, so must that collective spirit.

* To make sure you can access Music Week wherever you are, sign up to our digital issue here.