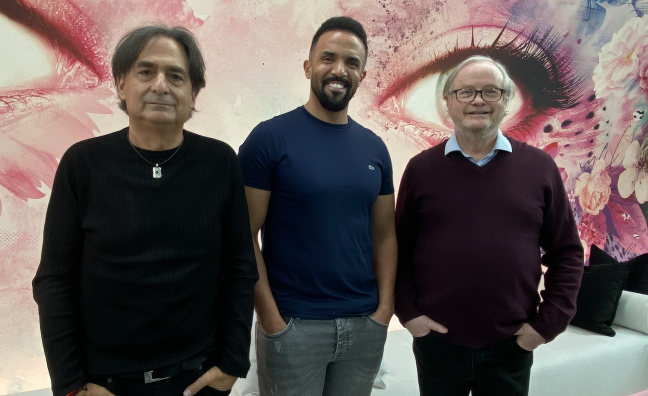 Round Hill Music has announced details of a new, worldwide publishing deal with Craig David, which includes his back catalogue and all new works.

The singer has won three Ivor Novello Awards – all for his breakout work in 2001 – and has sold millions of records around the world. The classic Born To Do It topped the UK charts in 2000 and has sold 1,946,306 copies, according to the Official Charts Company.

“After 20 years as a performer and songwriter this feels like a fresh start,” said David, who starred on the cover of Music Week alongside manager Colin Lester in 2018.

Round Hill Music was founded in 2010 by Josh Gruss and owns the rights to more than 100,000 songs by a range of artists including The Beatles, The Rolling Stones and Frank Sinatra. Robin Godfrey-Cass runs its London office. In 2018, Round Hill acquired Carlin Music, which sits is portfolio alongside Round Hill and Black Hill Records, Round Hill Nashville and Zync.

“Josh, Robin and the Round Hill Music team are obviously real music fans as well as talented and proven music publishers,” David added. “I couldn’t be happier that my music has found a new home with them.”

Josh Gruss, founder and CEO of Round Hill Music said: "Colin Lester and his team have continued successfully to advance Craig's stature around the world. I am looking forward to working closely with Colin and everyone at JEM Music Group. Welcome to the Round Hill family."

Colin Lester said: “Josh Gruss has built a hugely successful business with Round Hill Music but he is not just a money man; he proved to both me and Craig during our many conversations that he has genuine respect for artists and their music. We are delighted to be working with Josh and his team, especially Robin Godfrey-Cass who has been passionate about bringing Craig to the company from day one.”

Robin Godfrey-Cass added: “I am thrilled that Craig has entrusted Round Hill Music with his incredible catalogue and for letting us partner with him on future music projects. Craig is, quite frankly, a national treasure and we are proud to be the global custodians of his music. I and the whole Round Hill Music team are excited about Craig's future plans and look forward to adding our passion and expertise to his already brilliant team. Craig is a total professional and one of the most dedicated, talented and nicest human beings around.”

Craig David has scored 23 UK Top 40 singles, nine UK Top 40 albums and multi-platinum status in more than 20 countries. His 2016 comeback album Following My Intuition topped the charts and has 174,184 sales, according to the Official Charts Company.

Read our interview with Craig David and Colin Lester in full here.