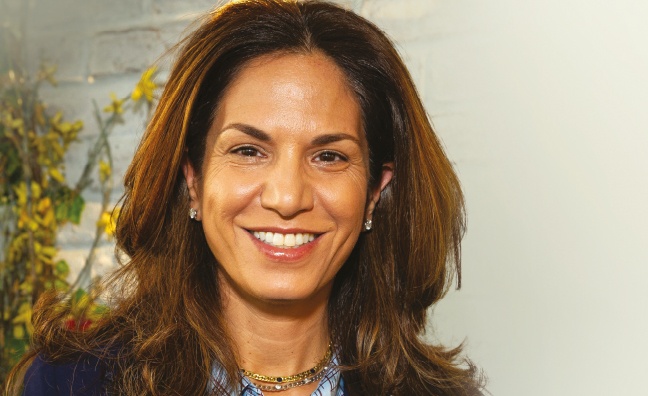 Reservoir Media CEO Golnar Khosrowshahi has spoken to Music Week in a wide-ranging interview about the growing power of the company she founded 15 years ago.

Reservoir has grown to represent over 140,000 copyrights and 36,000 master recordings and pulled off a major coup by agreeing a global administration deal with music icon Joni Mitchell last year.

As time has gone on, the focus has stretched to labels (Chrysalis Records/Tommy Boy Records/Philly Groove Records) and management through ventures with Blue Raincoat Music and Big Life Management.

“Obviously we’re not just a publisher anymore,” said Khosrowshahi. “With Chrysalis and Tommy Boy, we are in earnest a record label. We also have a management business and our operation in Abu Dhabi, so I think we have realised whatever that initial vision was. But it wasn’t the ultimate goal to become a publicly traded company. That was a move that made sense for our growth trajectory, it was not one that we had set out with. At the outset, we were really just focused on establishing a business and not losing money [laughs].”

The company, which launched at a time of industry contraction in 2007, is now one of the biggest independents.

In June, Reservoir published its first set of results since its IPO, reporting a spend of $224 million across 110 deals, with $13.1m net income. The company’s most recent financials, covering the three-month period ending June 30, showed a 46% increase in revenues to $24.3m which – Khosrowshahi told investors – puts the firm “on track to achieve our objectives for the year”.

“We’ve beaten our expectations every quarter,” she told Music Week. “Prior to the fourth quarter of our last fiscal year, we ended up actually raising our guidance and so we raised our expectations as well. We’ve always run the business rather institutionally, so going public wasn’t some major adjustment.”

Reservoir writers took home four awards from the 2022 Grammys, and further recognition then arrived at May’s Music Week Awards, where Reservoir came out on top in the Independent Music Publisher category for the second time in three years.

“I was shocked and very pleasantly surprised,” said Khosrowshahi. “There is no bigger recognition than to be recognised by your peers and that certainly does mean a lot to us. Why do I think we’ve won? Our people are the core of everything that we do and the reason we’re able to do it well.”

Reservoir appears to be going from strength to strength, has the company ever been in better shape than it is right now?

“Every year I would say that we are in the best shape, because we’ve done nothing but grow. The first few years we were operating in an industry that was very much under threat and under duress and the direction was uncertain. And that all changed, so yes, we are in the best shape that we’ve ever been. Our team is the strongest that it has ever been; it’s the largest that it’s ever been and we’ve realised a few things as far as diversifying our business. Going public has created opportunities that I never, ever imagined in [terms of] how seriously our team is taken. We have grown and that’s given us scale. But doing that has also given us a certain gravitas around the business.”

Was it the right decision to go public in the US rather than the UK?

“We investigated the UK route and, certainly, Hipgnosis and Round Hill had preceded us. We pursued the US listing for a number of reasons, not to mention that we were not a fund-based business before that. Our business is based in the United States and it just made more sense on a number of levels.”

Why does it make sense for the company to make the kind of acquisitions you have?

“When we didn’t have a catalogue that had representation in a lot of genres, or ages of music, then we would go after everything, so the catalogue has grown and we now have some pretty solid representation in certain areas. We’re not going to sit back and say, ‘We’re only going after this kind of music,’ or music of a certain age, because we can’t predict what’s going to come our way. The common themes are around whether it’s creative to the catalogue as a whole; around having very good visibility into what we can impact as far as organic growth; around the quality of the music; and around the people we are getting in business with – those are some of the criteria that we look at. We’re very well poised to continue to execute on transactions like Tommy Boy, but also much smaller transactions as well as continuing to populate the writer roster. We have no interest in populating the writer roster with five or six of the same kind of writer; we want to make sure we have representation in different genres, different sounds and are giving one-on-one attention across the board.”

Do you plan to pursue more deals for record labels?

“Those same principles apply on our record label acquisitions as they do on our publishing catalogues, in that we’re never looking to run a business that is heavily skewed towards the active roster. Our spend has historically been 75% catalogue/25% futures and, on the label side, we’d look at the same thing. If another Tommy Boy came our way, we would absolutely be interested.”

You mentioned some of your competitors earlier, did you look at Hipgnosis’ recent spree as any kind of blueprint?

“I don’t think it serves as a blueprint. We’ve been at it for 15 years. We have been acquiring catalogues for that long and we have a very sophisticated infrastructure that powers our deal flow and is the engine behind our M&A. It is undeniable that competition in our business has drawn more attention in music from generalist investors – and that competition should certainly be recognised and credited for bringing that interest. I would have conversations about music with people 15 years ago and nobody really understood the nature of these assets. So that proliferation of understanding has come with increased competition and the visibility around that, and that’s been great for everybody.”

But how do you feel about Hipgnosis CEO’s Merck Mercuriadis’ outspoken views on upsetting the established order of publishing?

“I don’t really know what they’re doing that’s different. I think they are referring to song management and to establishing a new asset class, but I don’t really see either of those two things as being new concepts. We have posted organic growth of 20% on our catalogues and that organic growth is exceeding the industry growth, which means we are taking those assets and adding value – through licensing; through an active platform of digital licensing, of sync, marketing, etc; through better collections and better infrastructure. So if I think about song management then that’s what we’ve been doing since day one. That value enhancement has always been our objective, but I don’t think that’s something that is exclusive to us and I also don’t think it is a new development.”

Is there any chance of Reservoir merging with another independent to create one giant company? Or even uniting with a major?

“When you say one giant company that sounds terrifying [laughs]. Listen, we’re opportunistic about the future, but I think our track record of what fits well for us is representative of what the future holds as well. That track record is rooted in finding turnkey solutions with like-minded partners – whether that is with Annette Barrett at Reverb, Spek at Pop Arabia, or with Jeremy Lascelles and Robin Millar at Chrysalis – these are all repetitions of the same pattern and we’re interested in continuing these businesses. That is a pattern that has worked well for us in our path to growth. And if we are successful at continuing to find that, I don’t see any change in our ability to execute on that.”