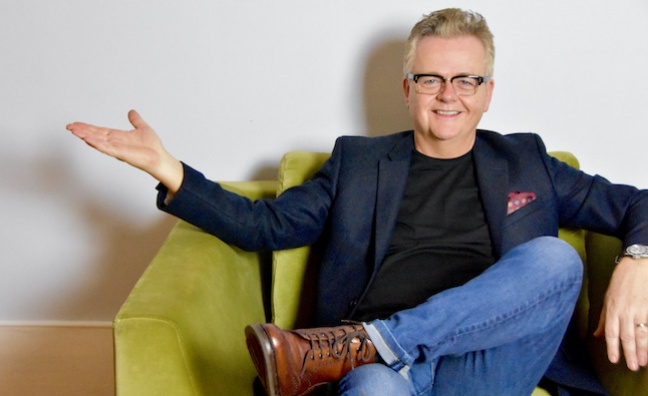 Universal Music Publishing Group UK MD Mike McCormack has used an exclusive Music Week interview to deliver a strong message to the new entrants in music publishing - including Hipgnosis’ Merck Mercuriadis - who have been buying up songwriters’ catalogues.

The company recently celebrated a victory at the Music Week Awards in the Publisher Of The Year category.

Under McCormack’s steer, UMPG UK has built a diverse and eclectic roster containing the likes of Harry Styles, Burna Boy, Little Simz, Headie One, The xx, Steve Mac, Kid Harpoon, Holly Humberstone, Glass Animals, Amyl And The Sniffers, Rina Sawayama as well as Griff. It has also engineered JVs with Tap Music on Dua Lipa - who had the biggest streaming hit in the US last year - and Fred Gibson.

In the last few years, traditional publishers have faced disruption from entrants to the market buying up publishing rights and songwriter’s shares. The boom for catalogue buyouts has been led by Hipgnosis, which has built up gross assets of $2.55 billion on the back of a relentless acquisition spree.

Advocating for songwriters to receive a greater share of a song’s income, Hipgnosis founder Merck Mercuriadis has made a series of provocative claims regarding the relationship between major labels and publishers.

The outspoken Canadian’s complaints did not go unheeded in the blockbuster DCMS report into streaming economics, which called for a full study by the Competition and Markets Authority (CMA) into the dominance by Universal, Sony and Warner of the UK’s record industry, and to a lesser extent in publishing (“As long as the major record labels also dominate the market for song rights through their publishing operations, it is hard to see whether the song will be valued fairly as a result,” the report stated).

Now it’s time for UMPG's Mike McCormack to speak up, as he takes up his right of reply to Hipgnosis…

Merck Mercuriadis has been very public in his claims of an “unhealthy” relationship between major labels and publishers, would you like to respond to that?

“Yeah, I’ll respond very clearly. We are run as a completely separate organisation and we are given the right to do whatever we want. We work very closely, creatively, with the labels, but they certainly don’t tell us what to do, and there aren’t any sweetheart deals for Universal ever involved in what we do. I think Merck should really concentrate on his business a bit more and stop criticising us because we’re trying to build the catalogues of the future. He’s acquiring the catalogues of the past.”

What about his claim that majors can’t give songs the same care and attention because of the volume of catalogues on their books?

“That’s simply not true. We’ve got a massive global organisation with huge sync teams everywhere. In every major territory, we’ve got a gigantic administration system that we have invested millions of pounds in to make sure it’s completely up to date and is the best system in the world. Our bread and butter is exploiting our catalogue and signing new catalogues and making those catalogues successful. In the 22 years I’ve been here we’ve signed some of the biggest artists that have ever come out of the UK. And just to be clear, we signed those artists when they had nothing going on. Now, if this industry was just about acquiring things that were already successful, that’s not the music industry to me, that’s the finance industry.”

Ultimately then, what is driving the explosion in catalogue acquisitions?

“The music industry is a hell of a lot more mature than it was when I joined. Honestly, it’s down to very simple stuff: inheritance tax planning; an ageing writer community looking to plan their futures more efficiently. That’s why it’s become something writers would consider now that maybe they wouldn’t have 20 years ago. We’ve been buying catalogues and writers’ shares for a very long time. This isn’t a new business, but back then it was something that a lot of writers just didn’t really want to do. It was their legacy, they wanted to retain complete control and they wanted to carry on earning from it. As I say, 20 to 30 years later, maybe they feel differently. But my primary focus is not acquiring as many catalogues as possible, it’s building those of the future.”

What was your reaction to the DCMS streaming report?

“I think their headline is, ‘We want songwriters to be paid more money.’ And of course we want songwriters to be paid more money, but it’s a very complex ecosystem. It’s a global infrastructure and I don’t think you can just look at it locally, particularly when streaming is a global industry as well. This needs all the parties involved to come together and work out what’s fair for everyone. We need the people who actually understand the whole ecosystem of how money is earned, within music, to be involved in that decision. But if there’s a headline, it’s yes, we agree that songwriters should be paid more.”

We spoke about Hipgnosis, but how do you gauge the impact companies such as Primary Wave, Concord, et al have had?

“A lot more money, or certainly a lot more talk about money, has come in. And as I said before, the catalogue acquisition business is a business that’s always been done by all the publishers, pretty much from day one. But it’s just a much more mature industry now. Their influx into the industry is fine. It’s a free market. It’s a free economy, and they can value catalogues at what they value them at. But our main objective is still breaking, and making the catalogues of the future. And unless they start investing in new artists, I don’t see that as the music business, I see it as the financial asset business.”

Has that influx of cash actually been a positive overall?

“Well, it means that music has more value... I guess the perception is that it has more value, and that’s a good thing. Is it a good thing for me? It makes the job harder, because everyone goes, ‘Well, maybe I should be thinking about selling,’ and people who wouldn’t have done it in the past might start thinking about it. So people just want to get a rough idea of what they think a catalogue is worth and that can put a lot of stress on the backroom because you’ve got to do a lot of calculations to work it out.”

Our interview with Merck Mercuriadis is here.