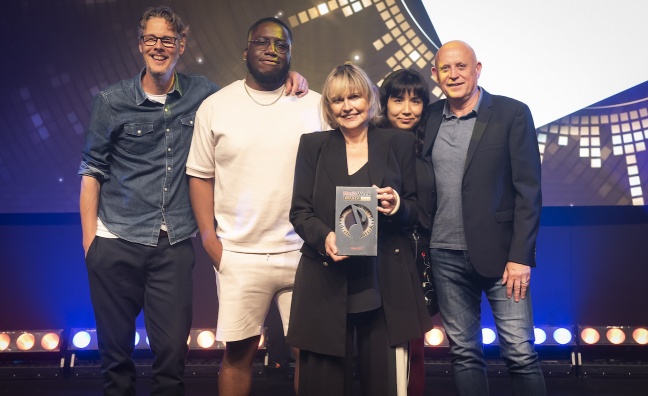 Reservoir has made it two out of three wins at the Music Week Awards.

After winning the first ever trophy for Independent Publisher Of The Year when the category launched in 2020, the company’s team got to pick it up in person when they triumphed at last month’s ceremony.

As well as listing on the NASDAQ in 2021, the indie publisher signed more than 100 deals including partnerships with Joni Mitchell, the estate of Nick Drake, Emeli Sande, Snarky Puppy, Dallas Austin, Rufio Hooks (co-writer on BTS’ Butter) and more. The company recently renewed its deal with hitmaker Ali Tamposi.

In the UK, Reservoir is working with rising stars including singer-songwriter Rachel Chinouriri. Writer-producer Jamie Hartman, who collaborated with Celeste on her No.1 album, won the Ivor Novello Award for Songwriter Of The Year.

How does it feel to win again after triumphing in the first year of this award in 2020?

“It's brilliant. It's just such a nod to all of us and international as well. We have such a great creative team around the world. Across the board, it's very tight knit.”

The great thing about what we do is the continuity, people want to stay and work with us

Why do you think you deserved to win - it’s a competitive time in this sector, isn’t it?

AB: “Oh, absolutely. It's incredibly competitive. And, you know, I think we're very lucky. We have a lot of competition out there. But we are good!”

It’s been a significant year or so with the IPO - what effect has that had on your job?

AB: “I don't think it's changed on a day-to-day level, on a creative level. But obviously that was a huge thing to do, and also it’s a female-led company [founder and CEO Golnar Khosrowshahi]. So it's all good.”

Does it give you more financial muscle in this current environment?

“Absolutely. It definitely helps with our competitors.”

Who are you excited about in terms of new songwriting talent?

“So many actually. We also have people that we've worked with for many, many years. The great thing about what we do is the continuity, people want to stay and work with us [Barrett has worked with Jamie Hartman for 20 years]. So it's a very family-oriented feel. It’s just a great environment to work in.”

Finally, you worked with David Bowie earlier in your career - are you excited about the new Moonage Daydream documentary (out September)?

“Yes, it’s getting very good reviews. I was very, very close to David really. I've been involved on the periphery. I miss him very dearly actually. I knew him from when I was 16 or 17. We had a great friendship. He’s a legend.”