'One of the highlights of my life': Steven Van Zandt talks sharing the stage with Paul McCartney 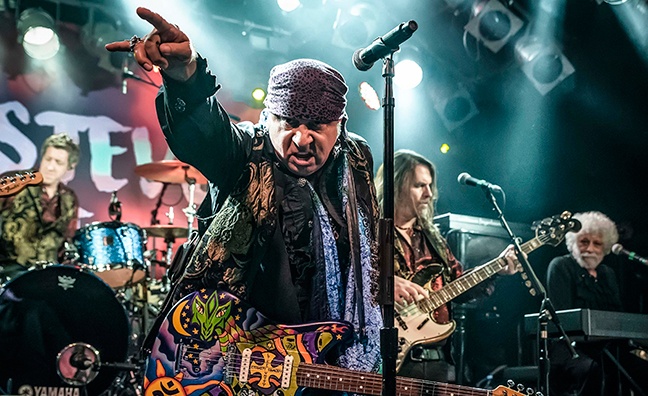 Steven Van Zandt has lifted the lid on his on-stage duet with Paul McCartney in a new interview with Music Week.

The E Street Band guitarist, whose latest LP, Summer Of Sorcery (Wicked Cool/UME), came out on May 3, was nearing the end of a solo show at London’s Roundhouse in November 2017, when McCartney arrived for an impromptu rendition of The Beatles’ I Saw Her Standing There.

“We’d been trying to catch each other’s show for a while,” explained Van Zandt. “Paul is working all the time and so I was very surprised when he happened to be in town. I said, ‘Just have a nice night out, don’t feel any pressure at all to come on stage’.

“Suddenly, we were about to do the encore and my roadie comes up and says, ‘Paul’s coming on!’ Now it just so happens that I’d felt, in case he did want to come on, I’d better have something ready. I had done a Little Richard-like arrangement of I Saw Her Standing There, just for fun, and that’s what we did – there was no rehearsal.

“To have Paul McCartney endorse what I’m doing was one of the high points of my life. He came on stage with Bruce and The E Street Band, which was already great, and then he had Bruce and I join him at Madison Square Garden, which was also great. But him coming on my stage and endorsing what I’m doing, personally, was very meaningful for me and one of the highlights of my entire life.”

McCartney was completing “unfinished business” following the infamous moment at Hard Rock Calling 2012 when the Beatle joined Bruce Springsteen and The E Street Band for their encore at Hyde Park, only for promoters Live Nation to pull the plug when the gig over-ran.

“Oh Jesus, that was unbelievable wasn’t it,” said Van Zandt. “We were like three minutes past curfew and they were so worried about the people living around the park. We’ve been laughing about it ever since, but it was just an embarrassment.”

The rocker has credited The Beatles' legendary performance on the Ed Sullivan Show and The Rolling Stones on Dean Martin’s Hollywood Palace in 1964 with changing his life.

“[The Beatles] were the first ones to open up this whole world for those of us who were misfits, outcasts and freaks and had no interest in the world as it was,” said Van Zandt. “We didn't really fit in and we had no idea where we were going. Suddenly The Beatles appear and it literally opened up a whole new possibility. But it was a long shot, of course.

“By the time we saw The Beatles they were halfway through their career and were very sophisticated at that point, with perfect harmonies. You looked at them and said, 'Wow, here's that whole new world' but it wasn't exactly inviting you in, it was just too sophisticated to think you could do it.

“Luckily, four months later The Rolling Stones came [to the US]. They didn't have the perfect harmonies, their clothes were all different – they were like the first punk band, actually – and suddenly, it seemed accessible. They made it look easier than it actually was, which encouraged you to try it out. You didn't think you could ever be The Beatles, but you might get a shot at being The Rolling Stones.”