'The songs are timeless': Sony/ATV's Nick Oakes on the making of Yesterday 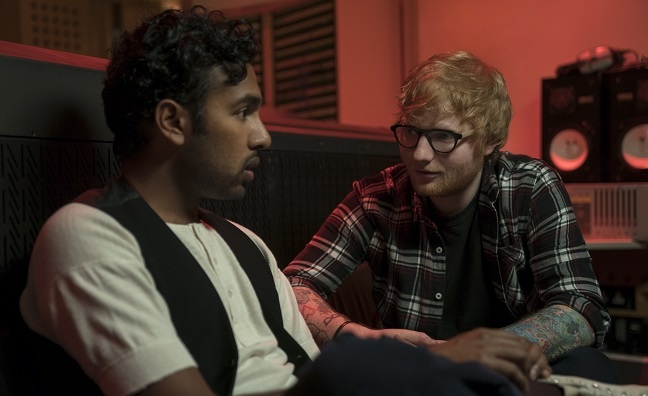 Yesterday is one of the big summer movies – and it’s potentially huge for the music business. As well as being a Beatles bonanza, the film features Ed Sheeran in a supporting role.

The movie stars Himesh Patel as a struggling songwriter, who wakes up one day to discover that he’s the only person in the world who remembers The Beatles. It opened at the weekend and entered the UK Box Office chart at No.2 behind Toy Story 4.

The Polydor soundtrack album is currently climbing the Top 40 in the Midweeks.

Why did Sony/ATV and the Beatles want to license music for this film?

“We do get a lot of requests. I think this one was a standout for us. Danny Boyle is involved and obviously his track record as a director is phenomenal, including the work he did at London 2012. It’s got a Richard Curtis script. Once we saw the script, we really liked it and it appealed to us. It’s a clever use [of the songs].”

Apart from The Beatles own films, it’s unusual for multiple Fab Four songs to appear in a movie…

“In terms of films, it’s the first time it’s happened. I think that shows how carefully we look after this catalogue. It’s very rare. Lots of people have asked about it in the past, but we guard the catalogue very carefully and respectfully. We don’t want to do anything that could be detrimental to the catalogue, to the group and their legacy. So we have to make sure it’s done respectfully.”

Was it still quite a lengthy process getting approvals for the music?

“Obviously, all approvals, especially with films, they take a lot longer than if we were working on an ad. We’ve seen the script change and evolve. I’ve read two or three different versions of it. It’s a lengthy negotiation because there are so many songs involved, it’s very ambitious, it’s not been done before. It wasn’t a quick thing, but you don’t expect it to be when it’s a film like this. Because it’s not been done before, it was never going to be straightforward, but that’s not to say it was difficult.”

How did it work with the songs being covered by Himesh Patel?

“The context of the film is that a world where The Beatles don’t exist, so the songs are all covers – but they remained true to the original. The main character worships The Beatles, they’re his favourite band. The character in the film wouldn’t do anything detrimental to the songs.”

Did the surviving members of The Beatles and their families get involved?

“We all had to work very closely with everyone regarding the songs and how they are represented in the film. We had a meeting very early one at Apple’s offices, just to make sure everyone was on board. I think Danny Boyle and Richard Curtis have already had dealings with Apple in the past, so that helped. We didn’t want to do something that didn’t have everyone’s approval.”

The Beatles remain hugely popular, but does this help reach a new, younger audience?

“Yeah, it’s a fantastic result for us, he’s in it quite a lot. His songs feature in it and he plays quite a key role in the film. You’ve got the Lennon and McCartney songs in there and then Ed Sheeran in there as well.”

Queen are another big Sony/ATV-signed act. How has the Bohemian Rhapsody movie helped their catalogue?

“When you get a film like that, there is a lot of focus on the catalogue. It brings it to a new audience, and we did see a lot of interest in the Queen catalogue off the back of that. They’ve always been popular for sync, and it’s not surprising at all. They are timeless songs, and the interest did surge off the back of the film.”