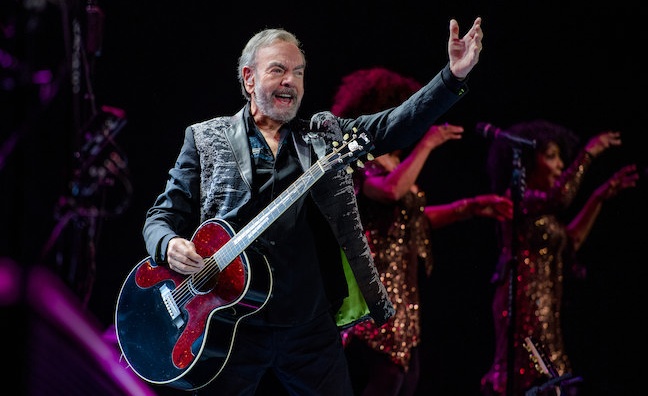 Universal Music Group has acquired the entirety of Neil Diamond’s song catalogue through Universal Music Publishing Group, as well as the rights to all recordings from his career.

“This comprehensive global agreement unifies Diamond’s recorded music and publishing in its new permanent home at Universal Music Group, giving the company unparalleled ability to amplify the iconic artist and songwriter’s body of work and maximise the value of the catalogue,” according to the announcement.

Neil Diamond has sold more than 130 million albums over the past half century.

The deal builds upon UMPG’s existing relationship with Diamond, as the company has served as his publishing administrator since 2014. UMG’s agreement also reunites his early Bang recordings and post-1972 recordings with those he recorded exclusively with UMG’s MCA Records between 1968 and 1972, a period in which he created and released hits such as Sweet Caroline, Holly Holy, Cracklin’ Rosie and Song Sung Blue.

Since 2013, UMG and Diamond have partnered on a recording agreement and licensing deal for the non-MCA recordings through its Capitol Music Group division and Universal Music Enterprises (UMe).

Under the new agreement, which includes previously unreleased tracks, UMG will also record and release Diamond’s future music, should he decide to return to the studio.

Neil Diamond said: “After nearly a decade in business with UMG, I am thankful for the trust and respect that we have built together and I feel confident in the knowledge that Lucian, Jody, Bruce, Michelle and the global team at UMG, will continue to represent my catalogue, and future releases with the same passion and integrity that have always fueled my career.”

Sir Lucian Grainge, chairman and CEO of Universal Music Group, said: “Neil Diamond is by definition, a truly universal songwriter. His immense songbook and recordings encompass some of the most cherished and enduring songs in music history. Through our existing partnership, we are honoured to have earned his trust to become the permanent custodians of his monumental musical legacy.”

Jody Gerson, UMPG chairman and CEO, said: “A legendary artist and songwriter, Neil’s music exemplifies how truly great songs have lasting power and stand the test of time. With this acquisition, which UMPG COO Marc Cimino played an invaluable part in, our global teams across all of Universal Music will work together to ensure that all of his timeless hits like Sweet Caroline, Red Red Wine and Cracklin’ Rosie will continue to impact generations of fans, both existing and those to come.”

Bruce Resnikoff, president and CEO, Universal Music Enterprises (UMe) and Michelle Jubelirer, chair and CEO, Capitol Music Group, jointly stated: “Over his meteoric career, Neil Diamond created one of the greatest recording catalogues in pop music history. To be able to represent it in its entirety is both an honour and a thrill, and the entire Universal Music team looks forward to upholding his iconic legacy.”

Diamond’s songs have been covered by Johnny Cash, UB40, Frank Sinatra, Andrea Bocelli, The Monkees and Barbra Streisand, among others. His music has been used to soundtrack some of the most popular film and TV series of all time, from The Simpsons, Friends, Mr. Robot and The Big Bang Theory to Donnie Brasco, Once Upon A Time In Hollywood and Urge Overkill’s Girl You’ll Be A Woman Soon, taken from Tarantino’s Pulp Fiction, and his own starring turn in 1980, as the lead in The Jazz Singer.

As well as being an anthem for Red Sox fans, Sweet Caroline is sung by English football supporters, at ice hockey games in Canada, and by WBC World Heavyweight boxing champion Tyson Fury.

“By acquiring Diamond’s entire catalogue, all masters and unreleased concert video – and through ongoing collaboration with the artist himself – UMG is determined that new and growing audiences will remember this unmatched singer and his music for generations to come,” added the statement.

The world premiere of The Neil Diamond Musical: A Beautiful Noise, a new musical production from Ken Davenport and Bob Gaudio, will open for a six-week engagement at Boston’s Emerson Colonial Theatre on Tuesday, June 21, before heading to Broadway, with tickets on sale in early March.

Diamond’s accolades, among others, include a Grammy, a Golden Globe, Kennedy Centre Honours and an ASCAP Film and Television Music Award, as well as induction into both the Songwriters Hall of Fame and Rock & Roll Hall Of Fame.

Neil Diamond was represented in the transaction by Gene Salomon from Gang, Tyre, Ramer, Brown & Passman, and his manager Katie Diamond.