On The Radar: FLO 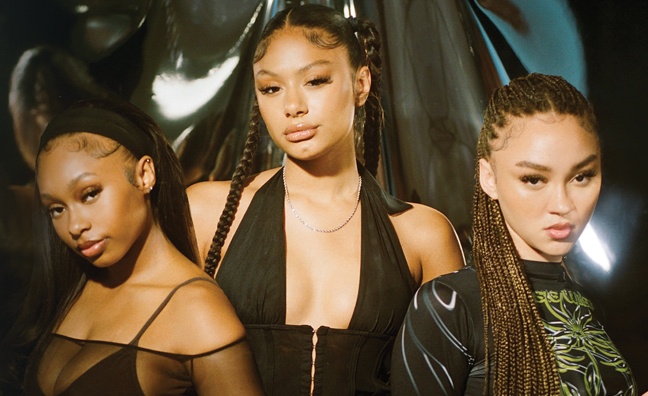 FLO have been named as the BRITs Rising Star act for 2023, as they usher in a new dawn for UK R&B. Music Week meets Island’s brand new group to hear their plan to show the music industry what it’s been missing...

R&B girl groups had their last real heyday in the early 2000s, with Destiny’s Child and others picking up the torch from ’90s stars such as En Vogue, TLC and SWV. Since then, the style and slickness of classic R&B has largely been conspicuous by its absence. While there have been phenomenal acts like Girls Aloud and Little Mix, the girl groups scene has also been somewhat depleted. Until now, that is. Enter: FLO.

Comprised of Renée Downer, Jorja Douglas and Stella Quaresma, FLO first appeared this spring with Cardboard Box, a MNEK-produced banger of a debut single. The track – which is about cathartically dumping an ex’s possessions – currently has over five million views on YouTube and more than 20m streams on Spotify, with the London-based trio quickly motoring towards the 2m monthly listener mark.

“We are working to the moon and back right now,” says Renée Downer, as the group meet Music Week in the rush of promo and recording that has become their lives. “We have melded into one brain. We are now the same person.”

She widens her eyes for emphasis and then starts to unwrap a panini. Interviews at least mean a chance to sit down and eat something. When they get time off, they sleep.

It most definitely is. Cardboard Box was a great choice to introduce the trio. It has lyrics that show strength, but also point to a bubbling undercurrent of cheekiness. ‘I’ma put your gold chains down the drain/And your Rollie/Might just drop a text to your homie,’ they sing with angel-sweet, ironic-innocent harmonies. Having Beyoncé and Dua Lipa collaborator MNEK on board shows the lineage FLO are coming from, while further endorsements have come from Missy Elliott and Sza. Then there are the nods, both sonic and visual, to the Y2K era – the video even includes a crystal-encrusted flip phone.

“It wasn’t even supposed to be our first single,” says Douglas. “Not everyone was on board with that.”

But they pushed for it and their ideas won out. This expression of will is especially interesting as FLO were put together in a classic girl group fashion by their manager, Rob Harrison of Listen Generously.

“He really wanted to try and form a girl group,” says Quaresma. “And he was doing A&R consultation for Island, who also wanted a girl group. So they teamed up and that’s how it happened.”

It also happened, and purely by coincidence, that the three girls already knew one another.

Downer and Quaresma were at the Sylvia Young Theatre School together, and they were friendly acquaintances of Douglas’ thanks to being part of the same networks at auditions and on social media.

“It was as though some of the work was already done,” says Downer. “We had chemistry and a relationship already, we didn’t need to create that before we could start.”

This solid base meant they have been able to exert more control over their careers than many of their girl group predecessors.

“I think a lot of people at the top level weren’t really sure what to do with us in the beginning,” says Quaresma. “So, in a way, we’ve been able to mould what people think and how they see us working.”

They have been savvy enough to realise that their genre can be a tough sell in Britain, “which is why we’re pop-slash-R&B,” says Douglas.

“We want to grasp as many people as we can and strap them down and inject them with R&B,” she continues. “There are so many people doing great things in the UK scene, so if we get a platform we want to be able to shine a light on them too. I think a lot of people in the industry are scared, they see how R&B is received. You look at the numbers and it doesn’t do as well as pop. But it is only going to do as well as you make it. If you have an incredible song and you push it, then it will work.”

“We’ve been lucky with the industry so far,” Downer reasons. “There’s always going to be more of a struggle if you’re young and female, but it’s been nothing we couldn’t work through, nothing traumatising. We’ve been around good people who make us feel safe and protected.”

“We give off a vibe that says, ‘We can’t be messed with,’” says Douglas. “So no one has tried anything too questionable. We’re still educating people though, even if it’s just about the team we need in place to make us look our best.”

FLO have another advantage when it comes to knowing how to sell their music. They are all aged around 20, “and we’re consumers as well as artists,” says Quaresma. They are their own target market, and are having a great time speaking to their peers. This means they can indulge in Gen-Z’s taste for Y2K retro – wearing crop tops and combats, Christian Dior Saddle bags on their arms – without getting sucked into meaningless pastiche.

“I think the early 2000s was when pop was in its prime,” says Douglas. “It was really good music and it was music that we were brought up on, but that doesn’t mean to say we’re sitting there thinking, ‘How can we make this more Y2K?’”

They also believe girl bands should be a gang you want to join.

“I feel like a lot of people grew up with a group,” says Quaresma. “And it is different to loving a solo artist. There’s more people you might identify with. There’s how they are with each other. It’s a different energy.”

FLO’s public energy is increasing in power every day. With their debut EP The Lead still causing a stir, they plan to spend the next few months focusing on filming and live shows. They will also be learning how to be pop stars: dealing with less privacy, less time to rest and also the media.

“Oh yeah!” starts Douglas, cheerfully. “The next single is going to be…” She breaks off. “Damn, you almost got me. I can’t say which it’s going to be or it will be everywhere and no one will be surprised.”

What’s more, FLO want to be models of strength and feminism, they say.

“Truly, we want to be exciting,” affirms Quaresma. “There’s been a hole where good groups should be. We want to fill that space and be the best in the world.”

WHAT THE TEAM SAY:

Louis Bloom, Island: “FLO are the act we have all been waiting for! The support and the love from our partners, the artist community and the fans proves they’re the real deal. They have also been totally embraced in the US.”

Rob Harrison, Listen Generously: “Jorja, Stella and Renée are a breath of fresh air – extremely  talented, effortlessly cool and fully committed to being their best. The success of their debut EP speaks to how essential they are.”