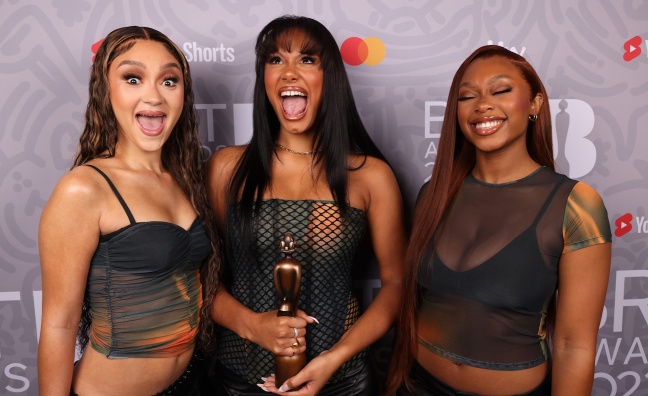 The BRIT Awards 2023 has unveiled FLO as the winners of the BRITs Rising Star award supported by BBC Radio 1.

The news was revealed by Clara Amfo on her BBC Radio 1 Future Sounds show. FLO, who are signed to Island, are the first ever group to win the BRITs Rising Star award.

The BRIT Awards 2023 with Mastercard will take place on Saturday, February 11 - the first time the show will be held on a Saturday in its history - and will broadcast live on ITV and ITVX from The O2 arena.

FLO have performed Cardboard Box on US TV show Jimmy Kimmel, the UK’s Later…with Jools Holland, The Glamour Women of the Year Awards and The BET Soul Train Awards, as well as being announced as Best Newcomer nominees at the MOBOs.

The Happi remix of Cardboard Box became the No.1 sound on TikTok UK after a creator’s dance routine went viral on the platform, leading to over 400,000 creations a day at its peak.

FLO released their debut EP The Lead in summer 2022. It has now amassed over 70 million global streams.

Reinvigorating the British R&B scene, FLO have already been tipped by the likes of The Guardian, i-D, Dazed, NME, Complex and Pitchfork. The group featured in Music Week’s Radar section earlier this year.

In a statement, FLO said: “From growing up watching the BRITs, to finding each other and forming FLO, releasing our first body of work in 2022 and winning a BRIT award in the same year! We are so shocked and grateful. We are the first group to win the BRITs Rising Star! We’ve just made history and couldn’t have done it without our wonderful fans and supportive families. It’s truly a dream come true. We feel so empowered creating the music we love and we hope others feel that too.”

The BRITs Rising Star award shortlist is selected by an invited panel of music editors and critics from the national press, online music editors, heads of music at major radio and music TV stations plus songwriters, producers and live bookers.

The BRIT Awards 2023 also confirmed the full list of award categories for the main show. Along with the flagship Mastercard Album of the Year, Artist of the Year and Song of the Year categories, the four new genre awards introduced for 2022 will continue, with the winner decided by public vote powered by TikTok.

The main eligibility window for categories decided upon by the BRITs Voting Academy runs from Friday, December 10, 2021 to Friday, December 9, 2022. The BRITs Voting Academy is made up of around 1,200 music industry experts across media, artists, labels, publishers, promoters, retailers and more, and is refreshed annually to ensure the voters are as diverse and representative as possible.

The BRITs in 2023 will also celebrate the Producer Of The Year and Songwriter Of The Year, honorary awards that are decided upon by the BRITs Committee.