On The Radar: Will Joseph Cook 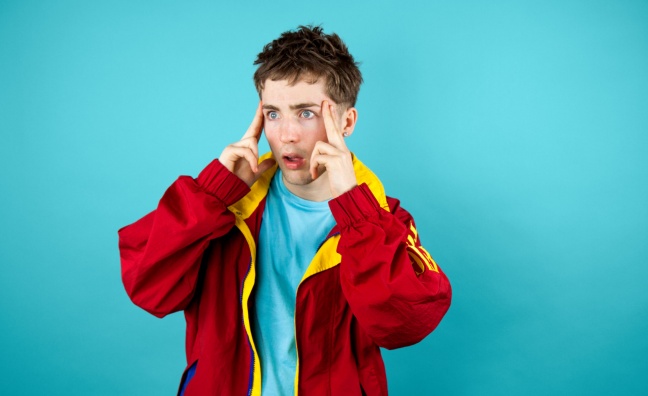 First things first: Will Joseph Cook has heard all the jokes about his name before. “The thing I always find amusing is, even in YouTube comments, people will make the Will Joseph Cook joke, and they must have seen the others, but they do another one,” he laughs.

“There are three in a row and it’s like, Guys, come on, I clearly know this.

“People tweet me like, Did you know that your name is also a question? Are they expecting me to go, Fuck, yeah, I never noticed. People ask me if my parents did it on purpose.”

When Music Week talks to Cook, he’s “a little bit hungover”, following the Warner summer party. “It’s an insane concept for an evening,” he says. “Getting a few people that you like and know and work with, and a bunch more people that you work with, but it’s probably not a good idea to get smashed in front of.”

On the plus side, the up-and-coming singer is happy that he met Calvin Harris - and that the pop star said he had a nice shirt.

Weird parties aside, Cook is more than happy with his label home, Atlantic, where he seems to know most of the people involved in his career. “I like to come into the offices a fair amount, like if we’re doing artwork,” he explains.

“I like to stay involved. I think it’s cool to always meet the people that are grafting on your music. It generally builds a more positive approach to the whole thing; people feel more committed if you all know each other.”

Cook met Jordan Whitmore, his A&R at Atlantic alongside Paul Samuels, at a gig. “We’d spoken over email and stuff, I was aware he was going to come to a show at some point, and it was a tiny dive - it wasn’t a proper venue,” he recalls.

“It was a little Spanish bar in a basement in Soho, such a tiny room, so there were only a few A&Rs and some random Spanish people in there. I met Jordan there and I think we went for a little dinner date, then the rest is history.”

It’s testament to how involved Cook is that he’s keen to go to the US again, following SXSW earlier in the year, because he knows that’s where a lot of his fans are.

He notes: “I really want to do a New York show or something; the majority of my listeners are American anyway, and they’re mainly based in New York. All the Spotify stuff is mostly American, so it makes sense to go out.”

The singer adds that, from his two EPs to his forthcoming album, he’s gradually taken on more responsibilties. “I think there’s been a very obvious change moving from EPs into dropping these singles,” Cook says. “If anything, I’ve progressively taken more control of every part of my aspect, as opposed to losing any control.

“One of the main things you learn is that if you delegate too much or you don’t show an interest, things go wrong. Especially with anything creative like artwork and videos. They all have to be my ideas, and that usually means it works out well.”

EPs for a pop singer might seem like an odd choice - many go straight into albums, but Cook believes that

“It’s never really good to follow a beaten path or formula; everything has to be tailored to you”.

“I don’t know what I would’ve done if I hadn’t done the EPs,” he adds. “I write a lot, so it’s good to release stuff and see what people like, and what I feel most proud of.

“Releasing stuff always gives you perspective on what you want to be doing, and what’s working and what’s not. I think EPs are super important, because they don’t have the pressure of being an accomplished body of work; they can just have some good tunes on. It’s people getting to know you, and you getting to know yourself a bit better.”