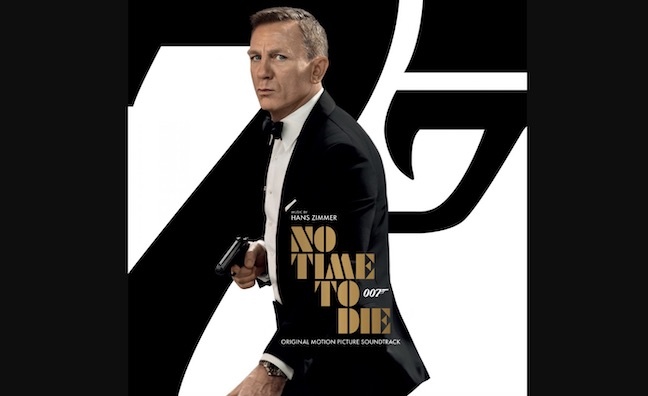 No Time To Die finally reaches UK cinemas this week (September 30). The film had its London premiere last night.

The latest James Bond movie has been delayed by 18 months because of the pandemic. But its theme song has already been a No.1 for Billie Eilish, who released the single in February 2020 and debuted it at the BRITs just weeks before the global disruption.

No Time To Die (Polydor/Interscope) has 605,098 sales to date (Official Charts Company). The Grammy-winning track will now have a renewed focus with the release of the film starring Daniel Craig in his final outing.

Unusually for a Billie Eilish track, the single features an additional co-producer alongside her brother and co-writer Finneas. UK producer Stephen Lipson worked on No Time To Die, alongside his role mixing the score and soundtrack. He also mixed the new Dolby Atmos score.

Hans Zimmer, who composed the soundtrack for No Time To Die, credited the crucial contribution of Lipson.

“As well as mixing the score, Steve co-produced what turned out to be an iconic Grammy winning Bond theme song,” he told Music Week.

As well as a successful career as a record producer working with acts including Annie Lennox, Paul McCartney, Frankie Goes to Hollywood, Whitney Houston, Grace Jones and Ronan Keating, Lipson has become established for his work on film scores and soundtracks.

He recently produced a new Gary Barlow song on the The Boss Baby: Family Business, and has worked on music for films including Superman – Man of Steel, The Amazing Spider-Man 2, The Lego Batman Movie, Batman - The Dark Knight Rises, Mission Impossible – Fallout, The Lion King and Top Gun: Maverick.

How does it feel for the movie and soundtrack to finally be out there?

“To be perfectly honest, it’s been so long since I worked on the movie so it feels pretty much like a distant dream. The single came out and did really well, which was a pleasant surprise, but since finishing the score I’ve been working flat out on other projects. Having said that I imagine Barbara Broccoli, Michael Wilson and Daniel Craig must feel massive relief that it’s finally being released. They must have been under enormous pressure, so hats off to them for holding out.”

Can you describe working with Billie Eilish and Finneas, and how you helped craft the song into a classic Bond theme?

“I started working on the song once Billie and Finneas had it in pretty good shape. My remit was to make it suitable for the movie. This involved editing it down and figuring how to give it the dynamic it needed without losing the essence of Billie Eilish. This proved to be an extremely long and complicated exercise involving many opinions and multiple orchestral arrangements. It took more than three months from when I started work on it to getting final approval. Finneas and I spoke regularly throughout the process, always seeing eye to eye.

“There were two events that are pretty memorable. I asked Finneas and Billie to give me a climactic vocal moment which Billie wasn’t too sure about, but when I heard it I knew it would deliver. Most important was getting Daniel’s approval. I finished the mix and everybody was happy but we still had to get Daniel on board. From the start, quite understandably, he wasn’t all that sure that the song delivered the right emotional climax for his final Bond outing, so satisfying him was key. I delivered the mix and Barbara, who was more than happy, called me to say that Daniel was coming to London and we needed to play it to him. I suggested that he come to my studio as I knew that, compared to any other location, it was without doubt the best sonic environment in which to hear it.

“It was agreed that he’d come to the studio on the following Sunday, so on the designated day I got in a few hours before Barbara and Daniel were due to arrive just to make sure it sounded as good as it could. Listening to it as if I was Daniel, I realised that the climax needed to be enormous so I spent some time massaging the mix so that, without any perceivable change, it was very much louder at that point. I then set the volume of the song so that it was pretty muscular, knowing that the climax would be earth-shattering. They arrived, I sat Daniel in the chair between the speakers, hit play and waited for his response. When the song finished he didn’t look up but asked to hear it once more. Barbara and I had no idea how he felt until the end of his second listening, when he looked up at me and said something like ,‘That’s f*****g amazing’. As soon as he’d approved it the wheels were set in motion and the news that Billie Eilish was doing the Bond theme song appeared everywhere.”

Finneas is now releasing an album - what do you think of his multi-talented abilities as songwriter, artist and producer?

“Finneas is remarkable. His abilities are second to none. And he’s such a pleasure to spend time with. I am a fan.”

How did the fact that it's the final Daniel Craig outing influence the score?

“If he did influence the score. he would have discussed it with Hans Zimmer and Steve Mazzaro, the composers. The director, Cary Joji Fukunaga, was at several meetings where I was present, and had substantial pertinent input. Daniel, as already described, was a key opinion in the title song.”

You've worked with many artists prior to your film career, who did you really rate for their skills in the studio?

“That’s a bit of a trick question. It implies that I’ve worked with people whose skills I don’t rate, which of course I’d never disclose. Having said that, it seems to be pretty much the case that people in the film scoring world are in many ways far more skilled than people who write and record songs. The task of delivering a score is overwhelmingly enormous compared to an album, often with restricted timelines. I am completely in awe of the composers I work with, their musicality, work ethic, their understanding of how to create cues, their grasp of technology, and most importantly their ability to deliver so much music that is emotionally on point, not forgetting their ability to discard weeks of work if it’s deemed inappropriate.

“If I were to pick an artist from a skills perspective, that would have to be Jeff Beck. I’m a guitar player so the thrill of sitting six feet from him for nearly a year was indescribable. There are brilliant guitar players and then there’s Jeff Beck. Utterly incomparable.”

Hans Zimmer has become a major touring artist - what do you think of his movie music becoming a live phenomenon?

“Hans’s music seems to translate really well in arenas. And I know that for him it’s a welcome change from being in a dark room for months on end. I think it’s an amazing thing that he’s doing this. The audiences love the shows, as do the band. I suppose the ultimate accolade was his playing at Coachella and getting such an amazing reception.” 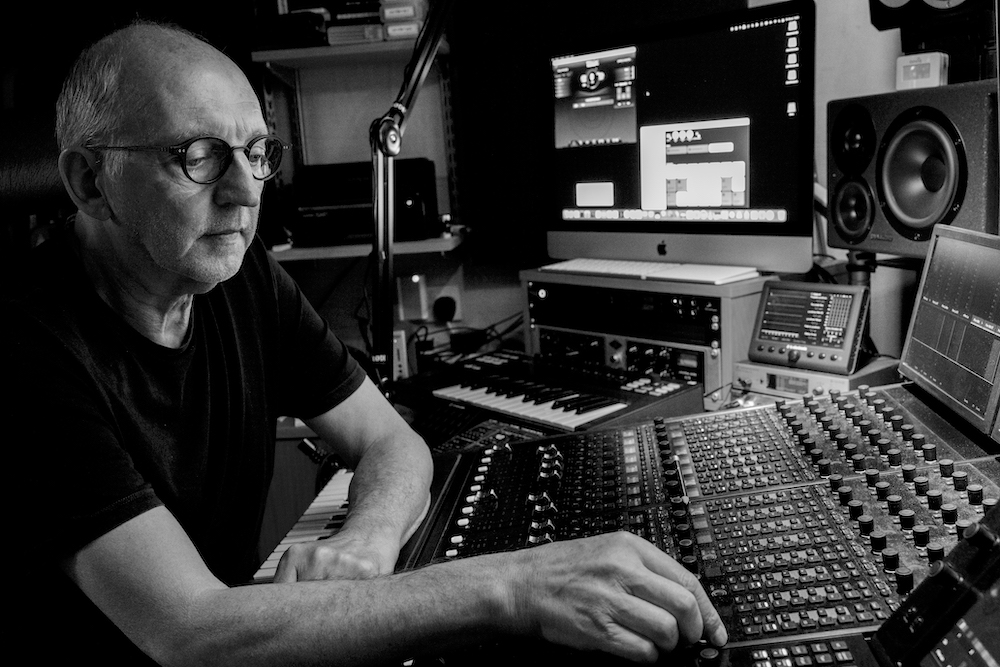 The Ivors Academy has been campaigning against studio buyouts - what's your opinion?

“This is a hot potato. Market forces, greed, lack of respect, supply exceeding demand, etc. My heart will always lean towards the artist and musician, yet over the years I’ve had to make compromises for the sake of the bigger picture. And more often than not, it’s paid dividends. We know that nowadays it’s becoming increasingly hard to earn a living as a composer, writer, musician or producer, so from that perspective my opinion’s pretty straightforward. But there are always two sides to every story I suppose. So my opinion? Pass.”

What are your current projects?

“Currently, I’m working on a Lionel Richie album which, even though it might sound like unabashed self-promotion, is turning out to be simply incredible. It’s turning into something that I hope will make people view albums differently. There’s much work still to do, but if everything works out it’ll be groundbreaking.

“My next movie will be the upcoming Mission Impossible, composed by Lorne Balfe. I’ve worked with Lorne for years. He is, simply put, extraordinary. I have so many examples of his brilliance, so for me it’s a total privilege to be involved in his projects.”

What have the challenges been during the pandemic for recording soundtracks and how have you worked around them?

“Strangely enough it’s worked well for me. I’ve had a state-of-the-art studio at home since long before the pandemic, so, even though it meant no physical interactions, I was fully prepared. Nowadays, assuming one has a healthy internet connection, everything is possible. The only downside was orchestras. That proved to be pretty tricky from a sonic and logistical perspective. A 90-piece orchestra recording their parts at home for 80 pieces of music needs very careful planning. It can and has been done, but not without serious technology, cooperation, patience and compromise.

“I think that one of the greatest advantages of musicians playing together is their interaction. Orchestras playing together could be compared to a flock of birds in the sky, ducking and diving in total synchronisation. A beautiful thing to behold. Interacting musicians subconsciously synchronise their tuning, timing and dynamics. That didn’t happen during lockdown.

“In answer to your question, quite honestly I’m embarrassed to admit that I’ve enjoyed it. Meetings were far quicker, deadlines were extended, and levels of interruptions were kept to a minimum. I suspect the future will be a hybrid of isolation and cooperation.”