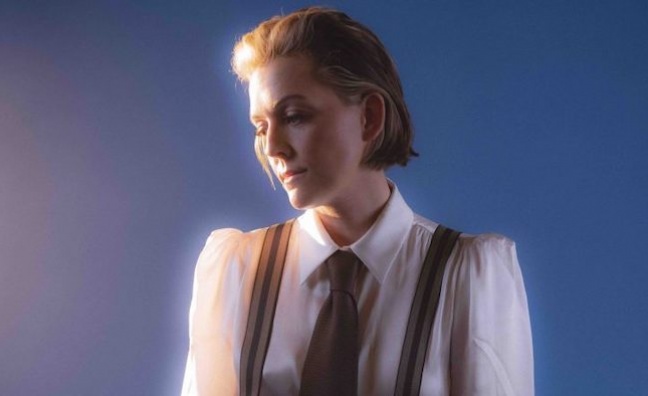 Grammy Award-winning singer-songwriter Brandi Carlile has opened up on her highs and lows in the music business in a new interview with Music Week.

Carlile’s autobiography Broken Horses topped The New York Times Best Seller list earlier this year, but the Seattle-based artist has returned to her day job for new album In These Silent Days, which is out today via Low Country Sound/Elektra. The LP is the follow-up to 2018’s acclaimed By The Way, I Forgive You.

Here, Carlile opens up on writing during the pandemic, receiving poetry from Bernie Taupin and making a video with Courteney Cox…

What impact did the Grammy-winning success of By The Way, I Forgive You have on your approach to These Silent Days?

“Well, I didn't approach the last one trying to achieve [that], so I went back to that headspace. And it was easy to do because of what was going on, because I wasn't feeling like a rock star or an entertainer, I was feeling more like a writer. A big part of it is that I had just written a book, so I had this wealth of information to draw from. All I needed to do to write the next album was to switch prose. I was definitely not writing music while I wrote [Broken Horses]. but I was playing it all the time. I started writing that thing on the road and, five weeks later, I had 80% of the book written. But that last chapter took me months on end, because it was so hard to end something in a definitive way during such an uncertain time in human history.”

What effect did the pandemic have on your songwriting?

“I was book writing mostly for a load of it. But when I finished the book, my great hero Bernie Taupin – Elton John's lyricist for all these years – sent me a few poems and it affected me on a molecular level as a songwriter. These poems systemically flipped the switch in my mind and suddenly I was a songwriter again. I started writing the album and the songs just kept coming. It fucked me up in the best possible way.”

“When I went into RCA Nashville to make By The Way I Forgive You, I was kind of blocked in terms of bringing drama and passion out in my music in the studio. A studio doesn't always feel like a great place to be vulnerable – it's harder to sing in front of four esteemed men than it is to sing in front of 4,000 lesbians – so I was always really struggling to get there. But something about the environment around By The Way I Forgive You, was really permissive. [Co-producers] Dave Cobb and Shooter Jennings were getting amped up when I would sing and I wanted to show off, and it was starting to get more and more possible for me to be dramatic and express myself in the studio. Then it was over and I was like, ‘No, I want to do 10 more songs now.’ And that's what In These Silent Days is. I went in there with my heart on my sleeve, ready to be vulnerable and shamelessly dramatic in the way that I sang these songs. That's what I wanted, and why I knew I wanted to go back to RCA with those two guys one more time.”

Is there a song you consider to be the key track on the record?

“It has to be Right On Time. It's like The Story or The Joke, where I'm going to sing it every night for the rest of my life and never not want to. It falls in the category of those three songs for me.”

You’ve collaborated in previous years with Sam Smith on Party Of One and Alicia Keys on A Beautiful Noise, what were they like to work with?

“Oh, my God, they're brilliant. Sam is a really powerful person. I think they have one of the best voices in modern pop music. Getting to sing with Sam was humbling, to say the least. Sam is spectacular, the range and grace that they have in their voice is brilliant. And then Alicia, we're the same age, we come from different places, but we have this thing in us – we have the hustle. We're both women and we've had to work really hard to justify our existence, and when we get together we just lock minds. If I'm going to hang out with Alicia, I don't plan an hour, I plan like three days! A Beautiful Noise came together live and she was teaching me and we were influencing each other. Those are the kinds of collaborations that you want because you leave the room a better artist.”

How would you sum up your music industry experience so far?

“I have had a really interesting career. I did an interview yesterday with somebody and they were adamant there had to be some discontentment with my time on Columbia. They were like, 'They dropped you! They didn't develop you!' But they allowed me to develop myself. I was a young person with a major label record deal, which was an unfathomable dream to me when I was licking stamps and making posters in Seattle for the entirety of my adolescence. I've seen some destruction and passed some wrecks, but my music business experiences have been pretty solid. I haven't experienced nearly as much oppression and rejection as a queer person in the music industry as I experienced before it, in church and living in small towns. I feel taken seriously and respected by my peers.”

Finally, Courteney Cox directed the music video for lead single Right On Time, how did you become Friends? (Sorry…)

“I met Courteney over at her house one day and found out we have a weird amount of things in common. Number one is that we need people around us all the time. She has this little house that she lives in and then she's got all these other dwellings and places for people to stay on her property and she cooks for everyone – it's pretty awesome. But I'm the exact same way. I'm a super culty, compoundy person and so when I met Courteney, I really clicked with her. I think we have the same enneagram number and we just started developing an unlikely, hilarious, but really special friendship. And she heard Right On Time and had this innate vision for what she wanted the video to be like and what she wanted it to reveal about me. She didn't pitch it in text, she pitched it in person. She acted out all the scenes and it was very clear that we were going to make a killer video. And we did.”