George Ezra on co-writing, TikTok and why he won't collaborate with other artists 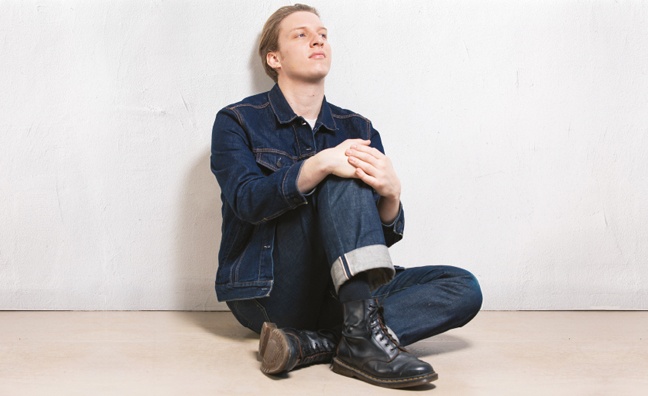 George Ezra’s new album campaign is building, with lead single Anyone For You looking set to break into the Top 10 later this week. It climbed six places to No.8 on the First Look Chart, based on early sales data from the Official Charts Company.

The track dipped a place to No.14 on last week's chart, although sales were actually up almost 2% week-on-week. Its to-date sale is now 101,133 after seven weeks on the singles rundown, according to the OCC.

Anyone For You, which is still No.1 on the UK radio airplay chart, is another co-write with trusted songwriting partner Joel Pott, who’s also taken on all production duties for Gold Rush Kid. The album drops on June 10.

“My relationship with Joel is one that I probably take for granted until I sit down with someone and talk about it,” Ezra told Music Week. “I found myself saying to him on this record that I feel like we’re a band, it’s just that only one of us tours.”

Joel Pott, a former frontman of chart-topping group Athlete, has been a long-term mentor to George Ezra.

But when it comes to co-writing, last month’s Music Week cover star has no plans to expand his team. And despite his friendships with other artists, who appeared on his podcast series (including Lewis Capaldi, Sigrid, Niall Horan and Elton John), Ezra is firm up about not teaming up for music

“I don’t like collaborating,” he told Music Week “I’ve got no interest in collaborating with other artists, full stop, I don’t want to. It’s not that I don’t like it when other people do it. Sometimes it’s great. I just don’t.”

Part of the reluctance is down to his style of working, according to Ezra.

“Everyone I interview on the podcast, the thing I hear most is that if a song is written in a session, the production is 80% there by the end of the day,” he explained. “I’m more like, ‘Should we do the acoustic version? Yeah let’s do that and live with it for a few weeks…’”

Recently he spoke to Griff and about her being a new artist whose single releases are already in double figures.

“That’s the name of the game now,” said Ezra. “I’m so fucking grateful I missed that – and I missed by a fucking smoking paper, it’s tiny.”

Ezra has other means of collaboration beyond the realms of songwriting. He sees Ryan Lofthouse, his manager and MD at Closer Artists, and the label team as his chief collaborators.

“I’ve been talking with these people for 10 years and we’re on the same page for the most part. It’s good to bounce things off them,” he said.

Ezra, who was a keen user of Twitter in his early days, remembers someone at the label introducing him to Instagram before the release of his debut album. He required a similar initiation when it was suggested he post on TikTok, initially dismissing it as the platform that people did silly dances on.

Eventually he said, “Can someone at the record label pitch it to me, like it’s Dragons’ Den or something, to show me what it can be, because I’ve not got the app, I don’t know.” Ezra was then sold on it.

“It feels like a place where people can express themselves in a fun way,” he told Music Week. “Subcultures are leaning into it in a way you never saw on Instagram and what that means is you feel, ‘Oh, I can be myself more on this thing,’ which I’ve never felt on social media.”

It can also serve as a place where he can put on little performances without too much stress attached.

“I think one of the mistakes our industry makes at major label level is you can overthink something that’s supposed to come across as throwaway or spontaneous,” he said.

Closer has its own digital team, headed up by Josie Charlwood.

“George has embraced TikTok with open arms,” said Charlwood. “He’s trying lots of new things with us and working closely with me and my colleague [digital marketing manager] Lucy Bradshaw to execute new ideas. The team over at Columbia have been integral to how we’ve been able to incorporate TikTok, making sure we work directly with the people there on best practice, strategy and new music teasers.”

Other plans include the expansive and immersive Gold Rush Kid website, a weekly journal and newsletters for fans to sign up to, stems from the singles being made available to remix and more.

“It’s a new era for George and our digital plan is very much tailored to reflect that,” said Charlwood.