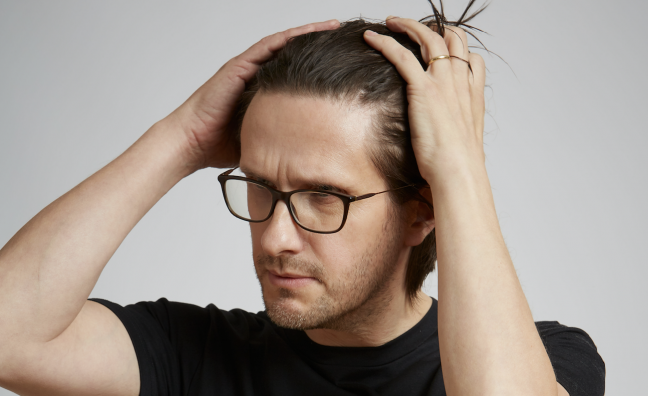 After a pandemic-induced delay, Steven Wilson’s sixth studio is finally out this week, and is vying for position in the Top 5 alongside Celeste, Arlo Parks and Fredo.

It’s safe to say that the former Porcupine Tree man pulled out all the stops for The Future Bites, an album for which the term hardly suffices. Together with his team, the four-time Grammy nominee conceived an entire brand with which to launch the record – or as they put it a “fully imagined consumer universe”.

Since confirming the record's January release last September, Wilson has been selling merchandise (including hole punches) and offering all manner of treats to fans. He also announced a super-limited, one edition copy of the record – titled Ultra Deluxe Music Product On Obsolete Media – which was sold for £10,000. The proceeds were donated to the Music Venue Trust.

This week, Wilson released the video for Self, which uses deep fake technology to warp his face into those of a range of celebrities including Donald Trump, Joe Biden, Scarlett Johansson, Mark Zuckerberg, Brad Pitt and David Bowie. Directed by Miles Skarin, the video takes aim at “our new age of narcissim and self-obsession”.

Clearly, The Future Bites is no ordinary album, with no ordinary campaign. Music Week spoke to Roger Walker, senior marketing manager at Caroline International – Music Week Award winners in 2020 – to unravel it.

The Future Bites moved due to the pandemic – what did you do with the extra time?
"With the postponement we had extra time to create loads more ideas and initiatives to further engage with Steven’s fanbase. The original concept behind the album was to reflect the climate of consumerism and how marketing has evolved in the digital age. With the change in circumstances due to the global pandemic, the title took on a strangely prescient new relevance. The idea that the mundane and the everyday could be given a new, luxury status via the addition of a logo seemed wholly at odds with the prevailing mood, and yet it also underlined the concept perfectly: the artifice around modern consumerism. For example, The Future Bites branded toilet paper sold as deluxe bathroom stationary.”

How did the campaign develop from there?
"We were mindful of sensitivities around the time of the first lockdown, so we were careful to not extend our marketing too far too soon. But as time went on we were able to create more ideas with knowing nods to the products we were subverting, for example branded hole punches sold as “deluxe dot generators” or canned air for a “wellness” way of life. One of the biggest product additions was the Ultra Deluxe Box Set, a limited edition 1 of 1 product with incredible exclusive content for a single fan. We included items like Steven’s Grammy medal and certificate, a track available nowhere else, original handwritten lyrics, polaroids and merch from photo and video shoots, and loads more – really special and unique items for that one super fan. The video content we used to launch the Ultra Deluxe Box Set was filmed at an empty Hammersmith Apollo, which was incredibly eerie but worked perfectly with the concept and gave a nod to his tour dates there later this year. The postponement also afforded Steven extra time to record more music, which resulted in The B-Sides Collection and complemented our single release plan. We could film videos for tracks that weren’t originally planned to have them. We also organised a number of livestream events, as well as multiple Tim’s Twitter Listening Parties, which have been a great success. Steven also developed a new podcast called The Album Years where he discusses his favourite albums with No-Man bandmate Tim Bowness."

With the album being about a fictional brand, what techniques did you use to build it?
"We created a whole company with its own website, employees, merch items and branding. Some items were purely fictional and designed to amuse and engage the fans, while others were actually available to buy. Our artwork reflected the concept with each packshot representing ‘aspirational deluxe products’: branded paint tins, ear plugs, pens – everyday items with The Future Bites logo on. The video for Personal Shopper takes this one step further and imagines a world in which you have to sacrifice yourself to purchase luxury items like those read out by Elton John during the track. We released and marketing the video around Black Friday/Cyber Monday, which again worked perfectly with the concept. Whist developing the content and ideas, we needed to not to lose sight of the fans and events in the real world and make sure we weren’t isolating them with the conceptual marketing. For example, it was important that the Ultra Deluxe Box Set which sold for £10,000 had a good cause behind it and was rooted in the real world (proceeds went to the Music Venue Trust)."

How did you approach the international marketing?
"Steven is a massive international concern, with fans all over the world and Caroline is uniquely placed to deliver best in class campaigns with dedicated teams in all major markets. That means any marketing ideas developed, be they in the UK or another territory are discussed by our teams and can be quickly adapted, whether that is virtual in-stores and exclusive T-shirts in Germany, hand-written lyrics in Netherlands, or bespoke digital content for fans in the US. Like everyone at the moment, Steven has been doing numerous interviews via Zoom, which in some ways has meant we’ve been able to do more of them, given we don’t have to factor in physical travel, so there are always opportunities to be had."

What are you going to do with The Future Bites brand next?
"There are plenty more ideas still to come, some of which we’re keeping close to our chest, so watch this space!"