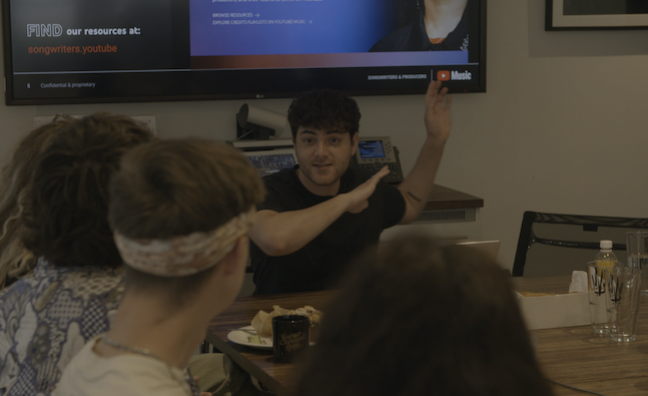 It was the second week of June, the second week of Pride month and the start of the summer. A group of young songwriters were gathered in the Warner Chappell Music building in Kensington, eating a breakfast that had been laid on for them. It was the third day of their songwriting camp and they were in early to hear from YouTube about how the platform could help their careers.

“The rest of the week they were starting at 11am,” says Corbyn Asbury, YouTube’s UK label relations manager, laughing. “We got them in early.”

The group were all from the LGBTQ+ community and had been invited by Warner Chappell Music and WMG’s People Of Pride ERG to spend the week writing songs with MNEK, SAKIMA, Chloe Latimer and Boy Matthews who between them have created tracks for Beyonce, Dua Lipa, Little Mix, Anne-Marie and more. Asbury’s role was to introduce the emerging writers to YouTube and what it could do for their careers in music.

“It was a masterclass on how YouTube can be useful to them. We covered things like creating a visual portfolio or a video lookbook,” he says. “It was also a chance for the group to meet people at YouTube, to make connections and get our details.”

The masterclass tied in with the platform’s recent launch of YouTube For Songwriters. “We work directly with songwriters and producers to help them build out their YouTube presence, but it was also important for us to create a globally accessible space for the songwriting community at large,” says Jenna Rubenstein, YouTube Music’s songwriter relations lead. “This includes a first-of-their-kind set of educational guides designed for songwriters to reference as they build and refine their channel.”

For Corbyn Asbury, joining with Warner Chappell’s Summer of Pride Writing Camp has further significance. “A lot of companies during Pride Month just change the logo to a rainbow and call it a day,” he says. “Whereas I see this as doing something really impactful and meaningful for the community. It’s an honour to be part of it, really.”

How did you get involved?

"I had met up with Paul Smith [Warner Chappell Music vice president for A&R and international songwriters] and he mentioned they were doing this. At YouTube we’d been trying to figure out what to do for Pride, to actually find a meaningful partnership. So we decided we would host a breakfast and workshop and do the masterclass. It was so nice to see a company go beyond just throwing money at something and use their time and expertise to create something."

Personally, how important do you feel it is to give support to others in the LGBTQ+ community?

"Firstly, there’s very little specific support for queer artists. Then if you look at record labels there’s a glass ceiling, as a young queer person you don’t see any precedence. Now there’s Azi Eftekhari at UMC, but before that you’d just hit a ceiling as head of marketing or whatever. And that means there’s no one with real power fighting the corner for queer creatives. On the indie side, there are no specific funding opportunities or groups for the LGBTQ+ artist, whereas you do get things like Women In Music or Power Up. So, for Summer of Pride Writing Camp, Paul and I very much wanted to use the power our companies have to create some space and opportunity."

What about the rest of the year, outside of Pride Month?

"We don’t just want to show up in Pride Month and then wash our hands of it, but obviously that takes resource and budget so we’re figuring it out. I always say that Pride should be a movement not a moment. I think Pride Month can be a catalyst for work that can take place in the rest of the year. We also need to think about how we work with other marginalised groups, because no one is just one thing and we need to consider intersectionality. Let’s spotlight queer black people in Black History Month. Let’s look at International Women’s Day. What’s the narrative that runs through all of these cultural moments?"

I always say that Pride should be a movement not a moment. I think Pride Month can be a catalyst for work that can take place in the rest of the year.

What else does YouTube do to support the community?

"Last year YouTube partnered with AKT, a UK charity supporting LGBTQ+ people aged 16-25 experiencing homelessness or living in a hostile environment. This year we wanted to give even more support and awareness to the different parts of the LGBTQ+ community by partnering with Mermaids, which supports transgender, non-binary and gender-diverse children, young people, and their families. In the past three years, young people contacting Mermaids have increased by 371% and the charity’s support service is more important, now than ever before. YouTube’s partnership with Mermaids this Pride season means that the charity will be able to continue to grow, support and connect digitally with trans, non-binary and gender-diverse young people through the secure online web chat and forums. It’s also London Pride’s 50th Anniversary and it’s the first time we’ve been an official sponsor. Internally, we’re looking at talks and discussions and drip feeding them through the year so that it’s not just an unlimited number in one month."

What role do you feel you personally play in this at YouTube?

"My role, as someone from the community, is to hold the company accountable. And make sure that we aren't just showing up during this month, to make sure that we are spotlighting underrepresented artists throughout the year. I'd love to see a world where we have specific resources for the community, whether it's funding or whether it's wellness, or whether it's mental health. YouTube is an open platform, and it's very accepting of the LGBTQ+ community. And I think we, we certainly could have a bigger role to play when it comes to when it comes to supporting that group.

As you say, YouTube is an open platform. That’s great in many ways but not in all. How are YouTube working on hate speech and discriminatory videos and comments?

"We won’t tolerate hate speech against any community on YouTube. There are certain tools that can help users. You can turn off live chat. You can turn off comments or screen for key words. We have alogrithims that can detect various forms of language. But we do see it on the platform, particularly when we’ve spotlighted certain LGBTQ+ projects. I think as a creator you need thick skin, but I also think our tools could do more. We’re always working on things, new iterations. To give a different example, before coronavirus we didn’t have a policy on misinformation and now we do."

Going back to the songwriting camp, what themes were the writers talking about?

"It was so interesting. Topics veered from serious personal issues to meeting somebody in a club – all of which represent the community."

Was it novel for you to see songs being created?

"Oh yes. I’m in label relations, so I might hear something that is still being tweaked, but I’m never there from the beginning. It was fantastic to see behind the curtain, see how the sausage is made. I was in awe of their creativity."