"It was a true joy": Chuck Berry's son opens up about collaborating with his father 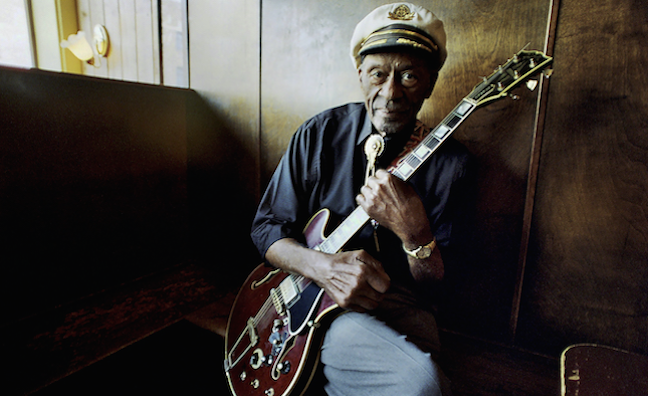 Last week, Chuck Berry’s new and final record, Chuck, entered the Official Albums Chart at No. 9 – marking his first UK Top 10 album in 40 years. Not only was the album – released on Dualtone/Decca Records - his first UK Top 10 since 1977’s Motorvatin’, it was also very much a family affair. Here Music Week speaks to Berry’s son, Charles Berry Jr - who contributes guitar parts on Chuck - about his late father’s final album…

Congratulations on getting into the Top 10, Charles – did that come as a surprise to you?

“I was kinda surprised, but I was confident that his fan base was going to really like the album because he worked on it for a very long time and it’s good music. So, good music typically sells and sells well.”

What was your experience playing on the album and playing in the studio with your father?

“I have to be honest with you, my dad finished pretty much all of his work and contributions years ago. There may have been some touch-ups on his part, but he was basically done. In 2014, he decided, Okay, I’m going to get this thing out the door. So that’s when some of the guest players were brought in, my son being one of those guest players in that time frame from 2014 to 2016. So, it was a lot of fun because I heard the music off and on over that 38-year span, so to actually get to then participate [was great]. It was my first time in the studio, and the first time for my son. It was a lot of fun, no question about it. It was a true joy to put down my parts to this project. My son, he was just beaming. He couldn't believe he was even on it.”

Are there any standout memories that you’ll take away from making the record?

“Well, you know, just my father’s process. He would go down into my parent’s cellar with his studio in that was at the house and then come up the next morning and have my mom take a listen, or have myself or my sisters listen to it. It was just a privilege to see him at work. My dad went from the single track era where the entire band is in the room together recording to ProTools where you can manipulate the entire song if you really want to. I am not going to say my dad was a master in the digital environment, but he was good enough to press record and just start playing.”

One of the clear talking points of the album is Lady B. Goode, how did that sequel to Jonny B. Goode come about?

“We didn't really talk about why he did it. I just started hearing the song Lady B Goode. I was like , Wait a minute! Lady be who, what? It was different. He just wanted to make it either the next chapter, or maybe the prequel to Johnny B. Goode. He just wanted to have a different perspective on that story line that would still be interesting and still be fun to listen to”.

The video for Darlin’ includes a wonderful montage, not just of Chuck's history, but your whole family's. It must have been an emotional experience for you to see it?

“Well, I’ll give you a better perspective and that is the one that my mother had when she saw it. She started crying. My Mom became emotional, my sisters became emotional, my daughters and my wife… it just struck them to their heart. And that was something I don't think my dad wanted, to make a song that just made people start crying. But in my family, and with the fact that he had passed away, it just brought back a rush of memories for all of us that this is real; those lyrics are from a man who is trying to instil values and love from himself to his daughter. He had three daughters so it was for them, but that could be anyone’s daughter. For a father who loves his daughter, it’s the perfect song to convey that love to them.”