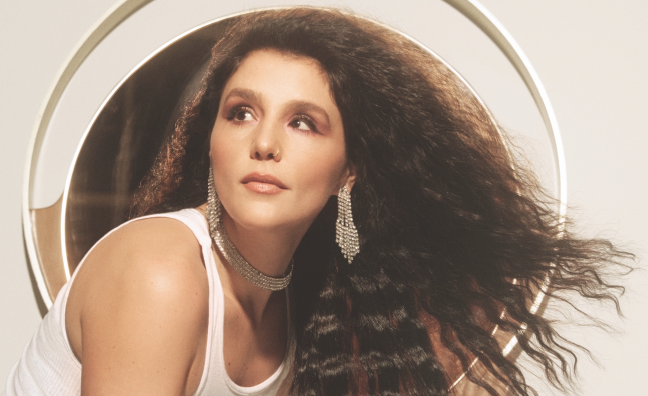 Jessie Ware has told Music Week about the “delicious” prospect of surprising the music business with her fourth album, which is soon to arrive off the back of the runaway success of her Table Manners podcast.

Since her last album, 2017’s Glasshouse, the singer and her mum Lennie have hit 3 million listens for their show, which sees them cook for and interview guests at home. So far, they’ve hosted Ed Sheeran – with whom Ware co-wrote Say You Love Me – Sam Smith, Sadiq Khan and a range of other big names. The podcast has had 1 million listens in lockdown alone.

Meanwhile, Ware has been gearing up for her new record What’s Your Pleasure? which comes out on June 26 via PMR/Virgin EMI. She delayed its release by a week in honour of Juneteenth, which celebrates African-American freedom in the US. We caught up with the singer in lockdown for the new issue of Music Week to hear about a new chapter for her pop career.

“I’m in a really good place, I’ve learned loads and the music is only feeling so good because of the podcast,” she said. “I don’t take myself too seriously, and the podcast certainly demonstrates that.”

“Initially, doing it made me think, ‘Isn’t this what work should feel like?’” she continued. “I don’t want to sound woe is me and get the old violins out, but I realised that I’d lost a sense of joy and enthusiasm for music and the promotion aspect. And when I thought that people potentially weren’t that interested in me, the podcast was an escape from that.”

But during the promo run for Glasshouse, Ware became disillusioned. She asked Universal Music UK chairman and CEO David Joseph if she could move from Island to Virgin EMI, where she would work on the album alongside Ted Cockle, who was recently replaced by Rebecca Allen as president.

“We adore Jessie,” David Joseph told Music Week. “She is hugely engaging, immensely talented and genuinely hilarious – we all want her to win. Her natural talent and fearless curiosity have allowed her to consistently reimagine her art while never being afraid to reinvent, and the new record is testament to that.”

Ware revealed that many in the business have congratulated her on the success of her podcast, hinting that they may not have been expecting another album just yet.

“It makes me chuckle, I’ve had many a music exec approach me – in a really wonderful way, don’t get me wrong – to congratulate me on the podcast, and in my head I think everyone thought maybe I’d stop making music,” she said. “It was quite delicious because I knew I had this good record coming. It’s quite fun surprising people.”

“I felt like I could make any record I wanted,” she said. “I’ve always been known as this ‘underground’ or ‘underrated artist’, which actually I disagree with, I’m on my fourth record and lots of people don’t get to this point.

“But there’s always been this sense that people haven’t discovered me fully and what the podcast did was show a complete other side to me that you don’t get to see when you hear an album, and a personality of mine that I wasn’t able to present in my music because I didn’t particularly want to.”

Read more on Jessie Ware’s new album on musicweek.com next week, and read the full interview in our new issue, out now. Subscribers can read it online here.