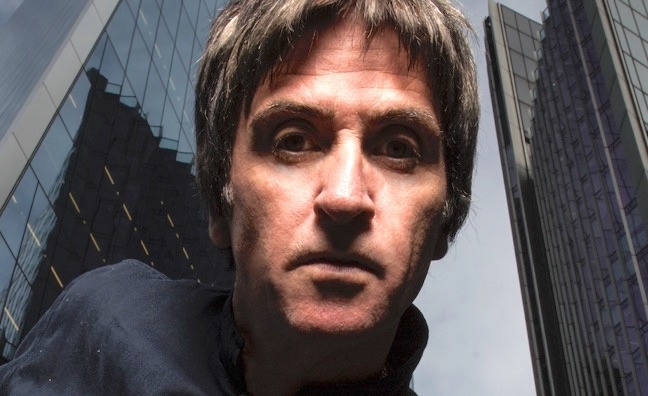 Along with the delayed release of James Bond film No Time To Die, its Hans Zimmer composed soundtrack has, naturally, sat on the shelf too. It's been a particularly agonising delay for the musicians involved as the theme song, Billie Eilish's No Time To Die, was released in 2020 just weeks before the pandemic shut cinemas and postponed the film's premiere, leaving it isolated from the rest of the work.

One of those who contributed to both score and single was Johnny Marr. A regular collaborator with Zimmer, he joined Billie Eilish and her brother, co-writer and producer Finneas O'Connell in the studio  for the first time as part of the project. With the soundtrack album finally out and installed as the highest charting Bond soundtrack ever thanks to it debuting at No.7 – plus, a solo EP released on Friday (October 15) ahead of double album, Fever Dreams Pts 1-4, which is due next year – Marr tells Music Week all about working with the Glastonbury 2022 headliner, plus how James Bond preceded This Charming Man in his musical evolution...

The Bond film soundtrack you contributed to has just been released with the film, No Time To Die. It must be a relief to get that out after all the delays?

"I'm so pleased for everyone who worked on the film because it was an unprecedented time of frustration. The movie was finished and good to go just as the pandemic hit. So to sit on that – on something so big, that was such a big undertaking and was so epic – was difficult for everyone involved. I'm now waking up every day to all these messages from people who are starting to see the movie. And it's a really good Bond movie. I always love working with Hans [Zimmer, score composer] and it was very interesting for me to play behind Billie's [Eilish] voice and be in the studio with Finneas [O'Connell, producer]. For a guitar player to play the Bond theme, that's kind of the holy grail."

Did you have an ambition to do the Bond guitar part then?

"There was an ambition to play [the riff for] Bond, but it was when I was 10. I was struggling to be able to get the right-hand part down, like everyone who's ever picked up a guitar in this country! When I was 10 years of age I never actually thought that I'd be stood in front of the actual orchestra with a conductor doing it. So it's a good job I put the practice in!"

The Bond theme riff truly is a part everyone learns, isn't it? No matter how basic your guitar skills, you can sort of make it work...

"Let me tell you when the moment of truth comes and you're doing it for real, it becomes much, much, much more difficult. Believe me!" [laughs]

It must have been great to collaborate with Billie Eilish on the theme song.

"Recording studios are ecosystems and they are particularly intense when the stakes are high. It's a rarefied atmosphere in a high-pressure situation. I've lived in that sort of environment from being a boy, so when you hang together and you're making a record or doing a major project, you just get a feeling for each other pretty quick. You're in a little bubble and little things mean a lot. I really liked her and her family."

What was the recording session for No Time To Die like?

"My job was just to do the right thing on her song. The power comes from the composition and from her delivery. She's brave enough to do it her way. She's a great singer, by the way. I'm asked a lot about Billie being the modern pop star, but Billie could have been successful in any era. She's a really, really great musician."