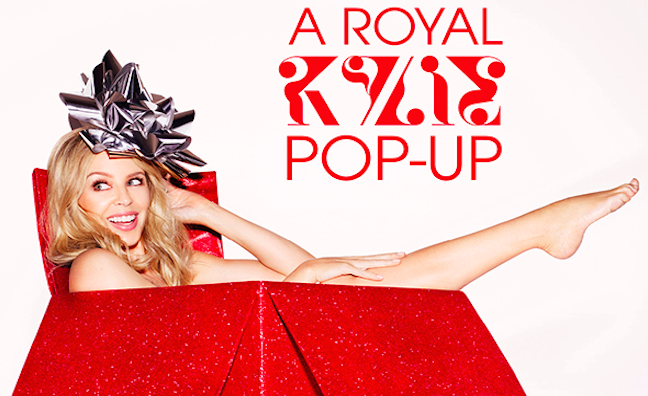 Kylie Minogue has announced details of a new pop up shop as part of her two-night residency at London's Royal Albert Hall this weekend.

Opening in collaboration with the historic venue this Friday and Saturday (December 9 and 10), the store will sell items personally curated by the singer.

Merchandise, homeware, festive decorations and exclusive items will be available, and there will be costumes from Minogue’s previous tours on display, including the lips prop from 2014-15’s Kiss Me Once Tour.

Signed items from her personal archive will be available as competition prizes.

Kylie Minogue said: "I’ve wanted to do a pop up store for some time and when the Royal Albert Hall said they would like to host it for me I thought it would be a really fun addition to ‘A Kylie Christmas’. We’ve loved putting the range together and I hope the fans enjoy it."

Lucy Noble, director of events at the Royal Albert Hall, said: “We’re thrilled that Kylie is creating her first ever pop-up shop to celebrate her performances here, giving fans the chance to get hold of exclusive Kylie merchandise. We have an unrivalled history of events and have hosted Winston Churchill, Albert Einstein and The Beatles but this is the first time we’ve ever hosted a pop-up shop!"

The opening of the pop up shop follows an exhibition of Kylie Minogue costumes and memorabilia at the Victoria & Albert Museum in 2007. The Weeknd and Justin Bieber are among the other artists also to have opened temporary shops this year.

Kylie Minogue is performing her only two UK headline shows of 2016 this weekend, in support of her festive release A Kylie Christmas, which features a cover of Everbody's Free (To Feel Good) by Rozalla. The song features in Boots' current Christmas ad campaign.

The Christmas store will be open from 10am-4pm this Saturday and Sunday, accessed via door six of the Royal Albert Hall, London SW7 2AP.